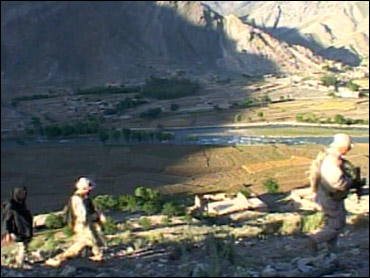 When 60 Minutes II entered the secret world of U.S. Special Forces, it was done by way of a Chinook helicopter, with pilots from the 25th Infantry Division from Hawaii.

The crew didn't know what to expect, because no television crew had ever been given access to the Special Forces base in the hostile Pesch Valley, an isolated place near the Pakistani border, where all women are expected to cover their heads in public.

Correspondent Lara Logan asked the captain in charge of the base about reports that Osama bin Laden was seen in that very valley late last year -- just before his team entered the area.

"The terrain around here provides a lot of great hiding places for a lot of bad guys, and he could be one of them," the captain replied. "Every time we meet with the elders, we remind them that we're looking for him, and that we'll pay good money for him. He's always on our minds."

60 Minutes II couldn't reveal the captain's name for security reasons, but was permitted to show him and his men in profile or wearing sunglasses.

"The biggest thing is we've made a lot of friends in this area," the captain said. "If anybody comes here and tries to hide, they'll come and tell us. And so the area we're in, and we're expanding that area, it's not a haven. No one can come and hide without being ratted out."

The captain said they'll be ratted out because the more friends the Green Berets make, the harder it is for men like bin Laden to find people he can trust.

It's a big difference from six months ago, when the Special Forces first arrived. Back then, they were rocketed every other day. Now, two to three weeks can go by without an attack, Logan reports.

And that's not the only change. During 60 Minutes II's second night at the base, a young girl was brought in by her uncle after falling from the roof of her home. The Special Forces medic, a pharmacist from Utah, was immediately called in. Her injuries were minor, but the base is the only place in the valley where people can get medical care anytime, day or night. And they regularly do.

The Green Berets also focus on education. There wasn't a single girl in school until they set up a temporary facility. Now, they're building a high school that will double the number of children being educated in the valley the day its doors open.

Logan asked the captain about this, back at the base. He told her: "We take a small amount of tax money and we'll throw them a bone; build them a well or something, and make sure that all the villages around know that, hey, if we're partners with the Americans, we're gonna get some assistance too."

What if they find out there are opponents in a village they are helping? "We'll bring them in and say, 'Hey, we've got an agreement. We've got an understanding and if you're hiding someone in your village, you know, that's a breech of our agreement,'" the captain said.

And breaking agreements with the Special Forces means projects will also stop. Right now, American money is paying to repair one mosque as a reward to the villagers for their ongoing support.

What 60 Minutes II learned about these covert soldiers is that the Hollywood image of Special Forces as trained killers is only one part of who they really are.

Lt. Col. Marcus Custer is one of the top Special Forces commanders in Afghanistan. While other parts of Afghanistan remain far more volatile, the Green Berets here have not lost a single man.

Custer told 60 Minutes II they love to have a mission that goes beyond killing people and breaking things - they like to be part of making a place secure so people have a chance for a normal life.

"We've trained all our lives to come here and do this and this is really like the Super Bowl for Green Berets - being able to come and set up a team and camps and really see the difference that our actions are making," Custer said. "It is a culminating experience for our whole lives."

60 Minutes II was given special permission to identify Custer because his mission in Afghanistan is almost over. Logan spoke to him on a security patrol — one of the ways the Americans make their presence felt.

"This is the first camp that my battalion set up, and it was a very hostile area according to Intel reports, and according to what we were seeing," said Custer. "Again, there were very large numbers of enemy fighters here."

What happened to those enemy fighters? "Some of them are probably working for us. Some of them have just realized that stability and peace are better than this constant chaos that they were furthering," said Custer, who believes, in the short-term, the American presence will help make the area free from enemy operatives.

"But in the long-term, the stability we brought, the security forces we're training, our work with the local police - that's what's going to keep this a safe, little, prosperous valley."

In order to keep the valley safe, the Green Berets have set up artillery on a mountaintop above their base.

Logan witnessed a live-fire exercise for the Afghan soldiers who will gradually take control. The Afghan soldiers wear the uniform designed by Green Berets in Vietnam and their "tiger stripes" are now a familiar sight throughout the valley.

Like the Afghan soldiers, the Green Berets don't often wear body armor or hard helmets. They don't want to appear threatening to the locals. They also want to move unencumbered and as fast as the enemy if they're attacked. That's crucial given the terrain. They patrol the mountains every day and even at night, when the conditions are more treacherous.

Part of their job is to recover enemy weapons, as they did on a day when intelligence reports said a local man who worked at the American base was hiding a cache in his home. The Green Berets decided to make an unexpected visit. But instead of breaking down the door, they gave the man a chance to invite them in - an important face-saving gesture in this culture.

The captain tried to persuade the man to voluntarily hand over the weapons, but he denied having any. When the captain ordered a detailed search, the man changed his story and led the soldiers into a bedroom, to a surprising hiding place. Behind the pots and pans and a shelf in the wall was a most impressive cache.

"He's got a lot of heavy machine gun arms and he's got Chinese 82mm recoil-less rifle rounds," said the captain.

"These are all rounds we can use on the base. We have these Chinese systems, which is great for us because now we've got more ammunition, and the fact that he led us to it instead of having to find it, is good. It makes it easy on us now because we don't have to detain him."

They came in looking more for cooperation than for a fight. "If we were to have searched this whole house, we could have torn it apart," the caption said. "And I guarantee we wouldn't have found that."

Incredibly, the soldiers even gave the man a ride to work, which is at their own base. They knew he'd be grateful not to lose his job despite what he'd done. These, Logan learned, are classic Special Forces tactics. It's how they earn the loyalty of the local people.

When the captain came here a year ago, he left behind his wife, two sons and daughter. His baby girl was just a week old. He says he misses his family, but it's a sacrifice he's willing to make, because he's proud of what he and his men have achieved in Afghanistan.

"We all have up and down days. ... I mean we are all like a family. We share the hardships, we share the good times, we definitely motivate each other and keep each other going," said the captain, who plans to come back one day.

"I hope to walk the hills with my sons. It's a beautiful country. It's got a great future, but I don't want to come back here as a soldier again."