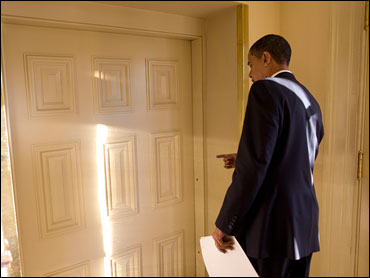 We know a lot more about Barack Obama than we did on Election Day. He wastes little time making big decisions. He was serious about surrounding himself with seasoned people, even if they are outsized personalities likely to jostle one another and unlikely to salute on command. He intends to move quickly to put his personal stamp on government and national life.

Yet much about how the 44th president will govern remains a mystery - perhaps even to Obama himself.

The stirring rhetoric witnessed on the campaign trail and in Tuesday's inaugural address is laced with spacious language - flexible enough to support conflicting conclusions about what he really believes.

Only decisions, not words, can clarify what Obama stands for. Those are coming soon enough.

Until then, here are the questions still left hanging as the Obama administration begins:

DOES HE REALLY THINK AFGHANISTAN IS WINNABLE?

The new president has strongly signaled that he thinks the answer is yes. But neither his rhetoric nor his policy proposals so far have fully reckoned with the implications.

If he intends to win in Afghanistan, he is not going to be a Peacemaker President. To the contrary, he is committing himself to being just as much of a War President as George W. Bush, certainly for the first term and very possibly for a potential second.

Most military experts think a decisive win in Afghanistan - as opposed to a muddle-through strategy leading to a gradual withdrawal - will involve a major surge in troops and a willingness to tolerate high costs and high casualties.

In any event, the country and its unruly neighbor, Pakistan, will quite likely dominate Obama's attention much more than Iraq.

Obama advisers say one of the biggest surprises of recent secret briefings on trouble spots around the globe was how unstable, exposed and dangerous Pakistan is. A nuclear neighbor that harbors terrorists injects all the more danger and uncertainty to the war on the other side of its border.

If that's true, Obama may in the end find muddle-through more attractive than victory.

But when does the short-run become the long-run?

Obama has said long-term, trillion-dollar deficits are "unsustainable." His inaugural address warned about the need to cut programs that don't work and make "hard choices."

Does he really mean it? If so, the second half of Obama's first term likely will be marked by austerity just as much as the first half is going to be marked by massive spending in the name of economic stimulus.

Embracing balanced budgets would also mean embracing steep cuts in weapons systems and entitlement programs, as well as curbing his ambitions for new initiatives in health care and energy. Tax hikes would also be part of the remedy.

With unpleasant medicine like this, Obama may instead find common cause with Democratic liberals and with Dick Cheney, who, according to former Treasury Secretary Paul O'Neill, once dismissed GOP deficit hawks by saying that Ronald Reagan proved that deficits don't matter.

HOW FAST IS TOO FAST IN IRAQ?

The president says he still wants U.S. troops out of Iraq in 16 months. Tellingly, he always adds caveats that conditions and advice from commanders will dictate the pace. Defense Secretary Gates recently made this clear: "He also said he wanted to have a responsible drawdown. And he also said he was prepared to listen to his commanders. So, I think that that's exactly the position the president-elect should be in."

What if conditions change for the worse? Violence is way down and many of the most troubled areas are showing signs of stability. But this remains an extremely volatile region that could erupt in new bloodshed. Will Obama still cling to a speedy pull-out if it means the country could implode?

Obama met with his military commanders on Wednesday. But it's anyone's guess whose advice he'll be listening to most closely, and which members of his heavyweight foreign policy team - within which there are significant disagreements over the Iraq war - will really have his ear.

WHAT'S IN THE FILES?

Any time someone criticized their policies on use of force, covert surveillance, or detention or interrogation of terrorism suspects, Bush and Cheney had an answer that was impossible for any outside critic to fully contend with: You don't know what we know.

What they said they knew was top-secret intelligence showing how many people with murderous designs on the United States are roaming the planet, how imminent the threats are, or how effective controversial anti-terrorist programs had been in averting another attack. Since no one else could see the files, no one else could be on equal footing in deciding whether the administration was right or wrong.

Since Tuesday, Obama has all the same files, and all the same access to the nation's top secrets, that Bush and Cheney ever did.

How will Obama react when he gets a constant morning diet of dire warnings? The president seems intent on shutting down the prison camp at Guantanamo Bay and ending torture - and has surrounded himself with critics of both who are unlikely to tolerate backsliding. But it is not unfathomable that Obama has a "Few Good Men" moment and has to tell liberals and civil libertarians they can't handle the truth - and that drastic steps sometimes need to be taken to avert disastrous consequences. What's more, it is hardly a given that any president-no matter his philosophy - would wish to give up the expanded executive power that Bush claimed in the name of national security.

Obama, for the entire campaign, said all the right things when it comes to keeping peace with Big Labor. He praised the power and fairness of unions. He expressed skepticism about free trade agreements like NAFTA. Most of all, he proudly sponsored legislation to make it much easier for workers to unionize.

Lately, he sounds like a man rethinking his enthusiasm.

In a recent interview with the Washington Post, he suggested he would not aggressively push for legislation to free workers to easily unionize (the bill is known as the Employee Free Choice Act. "If we are losing half a million jobs a month, then there are no jobs to unionize." Even Nancy Pelosi seems inclined to cut him some slack for a while on this one - but at some point the pressure will intensify and we will learn if this is truly a pro-union White House.

CAN U.S. POWER SAVE DARFUR?

Darfur will be the first test case - but almost certainly not the last one - in which we will learn just how strongly Obama believes his stated view that the United States should act aggressively when it can use its military power to stop genocide or other humanitarian catastrophes.

There is powerful momentum inside the Democratic Party to come the aid of the suffering people of Darfur. Among the biggest advocates are two of Obama's top advisers: Biden and U.N Ambassador-designate Susan Rice.

But with the military stretched thin, and with many others in his administration more skeptical about the use of force on problems that don't directly threaten national security, nothing is likely to happen unless Obama puts his own influence and repuation strongly behind an intervention.

During the campaign, he signaled a willingness to intervene, but also cautioned: "There's a lot of cruelty around the world. We're not going to be able to be everywhere all the time."

HOW MUCH DOES HE HAVE TO PLACATE THE LEFT?

In his inaugural speech, Obama spoke of tired ideologies and a time to think anew about policy and politics. That is easy to do if he simply means rejecting Bush's idea. But he has suggested this rethinking will hit the left, too - that's trickier.

Some times, Obama has been wiling to tick off the left. He picked Rick Warren, a Christian conservative, to deliver Tuesday's opening prayer and filled his cabinet and staff mainly with centrists. Other times, he seems to bend to liberal frustration.

Obama nixed John Brennan's appointment to be CIA director after anti-torture advocates expressed outrage over Brennan's involvement in Bush-era interrogations. Brennan's going to be working in the White House anyway, but not in any position that requires Senate confirmation. Obama also quickly moved to give a prime role to Episcopal Bishop Gene Robinson, an openly gay religious leader from New Hampshire, when liberals protested the choice of Warren to deliver the inaugural prayer.

Politically savvy liberal activists are an important reason Obama beat Hillary Rodham Clinton in the Democratic nominating contest, and a big reason he blew through all fund-raising records. It will be hard for Obama to govern without their enthusiasm, onthe other hand, it will be tough to reinvent politics if Obama is forced to routinely throw bouquets to the various factions of the Democratic Party.