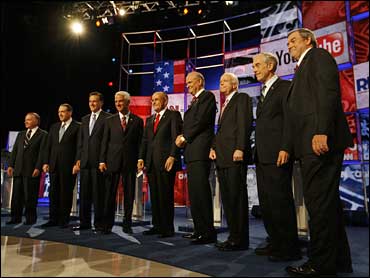 (AP)
The questions in last night's Republican presidential debate may have come from ordinary Americans but most of the answers the candidates gave were aimed directly at their primary opponents. In the most contentious GOP debate thus far, Mitt Romney squared off in direct and contentious exchanges with the two candidates challenging his front-runner status in the first two states of the primary season.

In the opening minutes, Romney and Rudy Giuliani sparred over illegal immigration, with the former New York City mayor defending his city's policies and refuting the characterization that he ran a sanctuary city. In turn, Giuliani accused Romney of having a weaker record on illegal immigration as governor of Massachusetts and several times referred to an incident where illegal immigrants were hired to work on Romney's property.

Romney appeared to get the upper hand in the exchange, challenging Giuliani on his charge and the sometimes vocal audience sounded a note of apparent disapproval at the mayor's line of attack. Tensions have risen between the two candidates over the past week, especially on crime, an issue that caused sparks between the two tonight as well. Romney has led most polls in New Hampshire in recent months but Giuliani has begun focusing on the state and sharpening his criticism of Romney.

At the same time, Romney has seen his lead in Iowa shrink as Mike Huckabee has begun to surge in recent weeks. The two also tangled early on, again on the subject of immigration. When Huckabee was asked about supporting measures to give scholarship opportunities to children of illegal immigrants as governor of Arkansas, Romney leapt. Saying Huckabee reminded him of liberals in Massachusetts, Romney asserted that he was supporting opportunities for illegal immigrants over others and said, "it's not your money."

But Huckabee, who has distinguished himself in the debates all year, turned in the strongest performance of the evening at a time when he's beginning to become a force in the race. Time and time again, Huckabee stood out, giving thoughtful and eloquent answers to questions about immigration, taxes, the death penalty and the bible, which for an ordained Baptist minister is a familiar subject. He also once again delivered the best punch lines. When asked what Jesus would do in regards to the death penalty, Huckabee said, "Jesus was too smart to ever run for public office." Romney was equally polished but seemed to have a checklist of key answers designed to hit key Republican constituencies.

Giuliani was uneven at times. His campaign spent the hours before the debate fielding questions about a report charging that as mayor, he had spent tens of thousands of dollars in security costs for personal reasons. Asked about that story by the debate's moderator, Giuliani said, "First of all it's not true. I had 24 hour security for the 8 years I was mayor. They followed me everyplace I went. It was because there were threats, threats I don't generally talk about. … They took care of me and they put in their records and they handled them the way they handled them. I had nothing to do with the way they handled their records. And they were handled, as far as I know, perfectly appropriately."

Fred Thompson tried to insert himself into the fight several times, taking on Romney on immigration and making a jab at Giuliani over his close past relationship with Bernard Kerik, who is now under federal indictment. Thompson was the one candidate on stage that dared to touch that third rail of American politics – Social Security – and seemed much more relaxed than he has in past debates.

But Thompson's campaign made a potentially harmful decision. In the spirit of the YouTube debate, each campaign was asked to submit a video of their own. Thompson's was the type you'd usually see run in the last days of a bitter race, not at a debate in front of a Republican audience. The ad featured past footage of Romney proclaiming himself to be pro-choice on abortion and Huckabee appearing to be asking for tax increases. When confronted about his choice of video, Thompson appeared to be taken aback; pointing out that is was simply using their words and saying, "I just wanted to give my buddies a little extra air time."

John McCain received hearty applause for his insistence that the U.S. is winning the war in Iraq. He made a point of directly confronting Ron Paul, the only anti-war GOP candidate, more than once, with good results. In one tense exchange, McCain strongly opposed the practice of waterboarding as part of U.S. interrogation and pointedly wondered how Romney could ever support it. But for most of the debate, McCain seemed as much part of the background, overshadowed by Huckabee, Romney and Giuliani.

Paul, the libertarian-bent GOP candidate who has gained a loyal following, was once again the fly in the ointment, speaking out against the war and federal involvement on issues like abortion. Paul endorsed the idea that there is a movement by some to create what amounts to a North American union with Canada and Mexico and declared that "our national sovereignty is under threat." Most intriguingly, Paul would not rule out a question about whether he may run as an independent in the general election, saying only that he had no intention of doing so before declaring himself proud to be a part of the movement he's tapped into. If he were to run as an independent, that could harm the GOP's chances next November.

Generally it's not easy to declare true winners and losers in these debates, but there's no doubt that Huckabee made the most headway. As his campaign – smaller, lesser funded and out-organized – struggles to capitalize on the sudden surge he's seen in the polls, this nationally televised debate allowed him to reintroduce himself to GOP primary voters. And he did not disappoint.