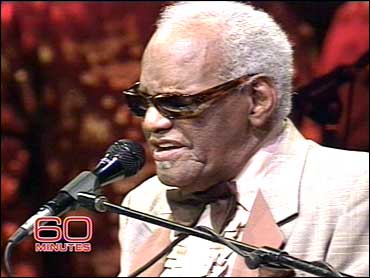 It's been six months since Ray Charles died at the age of 73, and he is back in the spotlight.

His most recent CD, released nearly two months after his death, has just been nominated for 10 Grammy Awards, including Album of the Year, and Record of the Year. And the movie about his life, "Ray," is being talked about as Oscar material.

In October, 60 Minutes put together a tribute to Charles, looking back at a story we did with him when he was in his prime. What we found was some revealing footage of how he lived his life without sight -- as well as some insight into his heroin addiction.

But first, with the help of Willie Nelson and Quincy Jones, Ed Bradley takes a look at the genius of Charles, and how he achieved a certain immortality with his versions of some classic American music.

"Music really and truly is my bloodstream, you know, my breathing, my respiratory system," said Charles. "And as long as the public is willing to listen to me, there ain't no retiring until the day when they put me away."

They've put Ray away now, but the public is still listening to his music. He's been back in the Top 10 for the first time in 40 years. His last CD, "Genius Loves Company," is the biggest-selling album of his long career. Released seven weeks after his death, it features duets with an eclectic group of old and new friends, artists who jumped at the chance to record with him, like B.B. King and Michael McDonald.

Country great Willie Nelson, a longtime friend, said those last sessions weren't easy. "It was just difficult, knowing that Ray was sick," said Nelson. "He wanted to do this last CD. I'm sure he knew it was the last one. That was very emotional."

Nelson said Charles'incomparable talent left its mark across American music, including country. He remembers when Charles' first country album hit the charts in 1962.

"He did more for country music than any other living human being, because when he did that album, already Ray Charles was, you know, a household word," said Nelson. "Here's Ray Charles doing country songs, introducing those songs to millions and millions of people who, otherwise, would have never had a chance to hear them."

How did Charles straddle so many styles, and do it so well?

"He just had a feel for all kinds of music, so his musical talents had no boundaries," said Nelson.

Legendary producer Quincy Jones, who's known and worked with Charles since they were teenagers, said Charles had that range when they first met in Seattle in 1947.

"Ray came to town, lit it up like a rocket," said Jones, who adds it was obvious, early on, that Charles was a special talent. "He had it. Whatever it is, Ray had it. And everybody knew it."

"Sinatra called him the only genius in the business," said Bradley.

"I would agree with that. Ray had a range, a 360 range that I don't think anybody ever had," said Jones.

Charles took that musical range on the road to every corner of the world for over 50 years, and he was always happiest when he was performing.

In 1986, 60 Minutes was privileged to follow him around and watch him make his music. Crews first caught up with him on the road at a Holiday Inn for a late night game of cards.

"The first hand you got blackjack? And I shuffled the cards," said Bradley. "How do I know you're not cheating me?"

"Well, how can I cheat you if you gave me the cards? I ain't touched the cards," said Charles. "The cards haven't even been nowhere near my hand."

"How do you know I'm not cheating you," asked Bradley.

"Well, let's put it this way. I figure at this stage of the game, if I got to worry about you, just like I tell my woman," said Charles. "I mean, at this point and time in my life, if I got to worry about what you doing when I'm away from home, then we ain't got a chance, do we? You know, because there ain't, that life ain't going to work like that. I'm gone too much."

When Charles went on the road, he decided no dogs, no canes. Instead, his personal assistant was never far away, steering his boss around, serving as a sort of combination seeing-eye person, chauffeur, right-hand man, or whatever Charles needed at the moment.

Does he remember when he could see?

Charles never knew exactly why he went blind, but he remembered starting to lose his sight at 5, a few months after his younger brother had drowned. Born in Georgia, he grew up dirt poor in Greenville, Fla. His mother sent him away to a public school for the blind at 7. At 17, with both parents now dead, he moved to Seattle, where he started his recording career.

When 60 Minutes visited Charles, he was living in a modest apartment in Beverly Hills, nothing fancy. Unselfconscious, he gave a rare glimpse of his daily routine, what it was like to be Ray Charles.

He told us he didn't need much to get along, just his independence. "My mom, she instilled in me to try to be as independent as possible, because her thing was, even people who love you, they won't always have time to deal with you when you may need a person to do something," said Charles. "So you better learn how to do as much for yourself as you can, and I have trained myself to do that."

Does he ever get angry because he's blind? "Why? About what? When you are blind, I think you probably only lose maybe 1/99th of what life is all about," said Charles. "I know it's very important to see my children, the beauty of the moon, OK, that's that one percent. But it doesn't stop my life."

"[He's] the most independent man I've ever seen in my life. The only time where he ever appeared to have any kind of handicap was when a beautiful woman was in the room," said Jones. "Then he started walking into walls and so forth. ...'Can I help you Mr. Charles?'Jones says the sympathetic women would say. ...He'd get real blind, you know, when the pretty girls were around."

Charles was married twice and had 12 children by seven different women. But another passion he had was heroin. Charles was addicted for 17 years, and he finally kicked the habit in 1965 after his third arrest.

He was frank with Bradley in never-before-seen footage about his drug use. "Some of the biggest records that I've ever had is during the time when I was using drugs," said Charles. "You see, but that ain't to say that it was the drugs that created the big records."

Did the drugs make him play better, or perform better? "I never did think that," he said. "I used them because I enjoy, I mean, I enjoyed what I was doing."

After he gave that up, he was rarely without the Ray Charles Cocktail – coffee, a little sugar, some gin. But Charles was always serious about the business of being Ray Charles. He was one of the first artists to own his own master recordings.

"You've made a more than comfortable living, but have you made the kind of money that the really big white artists make?" asked Bradley.

"No, obviously I haven't. And won't. But so what? I can't eat but one meal a day. I can't make love but to one woman at a time, do you understand," said Charles. "I mean, so when you get right down to it, man, you can have 15 islands or whatever, or 13 cars or 10 airplanes. But what does it all mean, you know? I am, as you so beautifully put it, comfortable. I like that."

How does Nelson explain Charles' longevity? "He touched all of us. He sang to everybody," said Nelson. "He was the guy who felt it as much or more than anybody."

"He said, 'Every music has its own soul. Be true to the soul of the music,'" said Jones. "And those are words that have stuck with me for the rest of my life."

That thought lives on in Charles' unique rendition of "America." As usual, he put his own stamp on it, always beginning with the third verse. It has become the definitive version of the song, an American anthem -- a classic, just as the man who sang it.