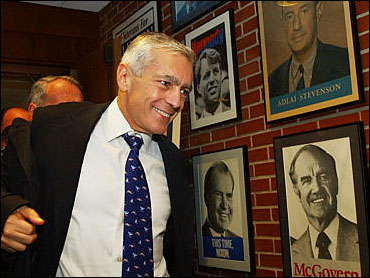 
According to retired Gen. Wesley Clark, when a jet takes off from an aircraft carrier, it "sags" towards the ocean as the pilot hits the afterburner. It's a normal occurrence for fighter pilots who must harness the short burst of energy to successfully clear the deck. And it's exactly how Clark sees his own campaign.

"We sagged, we didn't hit the waves, and now we're flying back up out of that," Clark told C-SPAN Wednesday when he was asked whether early glitches have slowed his campaign's momentum.

Those in the know would argue that Clark doesn't draw the same crowds as say, Howard Dean, who can attract thousands eager to hear the energized doctor. At Wednesday's event at a Rochester, N.H., preschool, just a dozen people turned up for a "Conversation with Clark." The word "intimate" wasn't on the sign taped to the front door asking parents to come hear the candidate, but he probably won a few votes by talking to the group of women for about 45 minutes.

Based on Clark's scheduled venues, his supporters would argue that it's quality, not quantity that matters. After a Tuesday night event at the Alpine Club in Manchester, N.H., the town's former mayor, Sylvio Dupuis, pulled Clark aside. "If you just keep coming out like this, meeting with small groups, these people are going to vote for you," Dupuis told Clark. "You're going to do all right."

Clark might have taken Dupuis' advice when he asked the crowd at a rally the next day in Portland, Maine, for their help in spreading the word on his campaign. "I need your commitment. I need your friends, your family, your colleagues, your business acquaintances. I need 'em next door in New Hampshire," said Clark.

As he enters his tenth week on the trail, Clark and his campaign have become more adept at generating the all-important buzz. The candidate has met privately with Hollywood heavyweights like Madonna and Jennifer Lopez, and celebrities like actor Ed Norton and REM singer Michael Stipe attended a recent Manhattan fundraiser.

While the "Material Girl" hasn't officially endorsed Clark, she's met with him twice, giving him the unofficial "OK" to mention her name at events. When asked how he would generate excitement during the primary campaign season, Clark responded, "I'm going to do everything I can to make it as exciting, interesting and fun as possible. I was even talking with Madonna - Madonna - yesterday."

Next week, Clark will unveil his "Turnaround Plan for America," in which he will set specific goals on five domestic issues he says will be fulfilled by the end of a Clark administration's first term. How can the campaign make serious issues like the economy, health care and the environment fun and exciting? Putting the general in an RV with "Clark '04" emblazoned not-so-subtly on the side for three days and calling it a "tour" is a good start.

Of course, it isn't all fun and games for the campaign or for the voters. To qualify his Madonna reference on Tuesday, Clark went on to say, "But seriously, we have to recognize as Americans first how important this election is. This election is about the future of America in a way that no other election has been."

Even if Clark may not lead a pep rally very well, most voters still say it's substance that matters. After Wednesday night's question and answer forum at Exeter Academy in New Hampshire, audience member and undecided voter Ann Kaiser compared Clark to the other candidates she's seen.

"Dean and Edwards have a lot more energy, it appears, than Clark or Gephardt do," Kaiser said. "But, you know, a high energy person doesn't necessarily appeal to everybody," and Clark, she added, is "certainly very intelligent and can think on his feet."