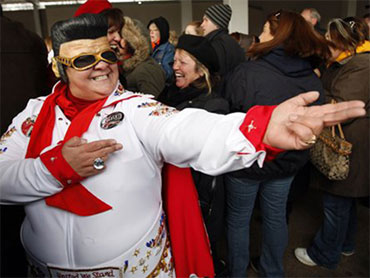 Unemployment and outsourcing are big issues in Campaign 2004, but Democrats hoping to make political hay out of them might want to be a bit more original than Democrats of yesteryear.

They've traditionally been fond of pointing to the Republican Party as the party of Herbert Hoover, on whose watch the nation sunk into the Great Depression of the 1930s.

Hoover has in fact been mentioned repeatedly by the John Kerry campaign as the last president until George W. Bush to oversee a loss of jobs. But a national poll finds that most people don't connect the Hoover name with the presidency, the Depression (whose camps of suddenly homeless individuals were known as "Hoovervilles") or the 1929 stock market crash.

Just 43 percent of the 634 adults questioned by the University of Pennsylvania's National Annenberg Election Survey correctly identified Herbert Hoover. Twelve percent thought he was the director of the FBI, a post held for 48 years by J. Edgar Hoover. Four percent linked the name to the Hoover Dam, the Nevada-Arizona structure honoring the former president. Three percent thought Hoover had something to do with the vacuum cleaner invented in 1907 (by Ohio janitor James Spangler, whose cousin William H. Hoover became president of his company).

Fifty-four percent of survey participants age 65 and older knew Hoover in a political context, compared to 38 percent of those 18 to 29.

The nation's touch of amnesia when it comes to history cuts both ways - politically, that is.

Some Republicans hoping to put a dent in Kerry's war hero image found it hard to contain their glee earlier this year at the discovery of an old photo appearing to show Kerry and Jane Fonda in the same crowd, back in the 1970s when her anti-war activities and visit to North Vietnam earned her the despised nickname "Hanoi Jane."

But some of those GOP smiles may have faded, because just as in the case of Herbert Hoover, a lot of folks weren't around in those days, and some who were simply don't remember it all that well.

Pollsters discovered that only one out of five people connected Fonda - a two-time Oscar winner who continues to be politically active, although less controversially in recent years - with opposition to the Vietnam War.

Only 20 percent of those surveyed knew Fonda as a Vietnam War protester. Twice that many identified Fonda as an actress, 9 percent tied her to exercise videos, and 2 percent linked her name to either her father, the late Oscar-winning actor Henry Fonda, or to her ex-husband, maverick media mogul Ted Turner. Another 11 percent gave a variety of answers while 17 percent had no answer at all.

Those 65 and older were far more likely than younger people to remember Fonda and the headlines she used to make. In the older group, 50 percent thought of Fonda in terms of her activism against the war in Vietnam. Only 5 percent of younger people viewed her in that light.

The survey, which was conducted March 1-15, has a margin of sampling error of plus or minus 4 percentage points.