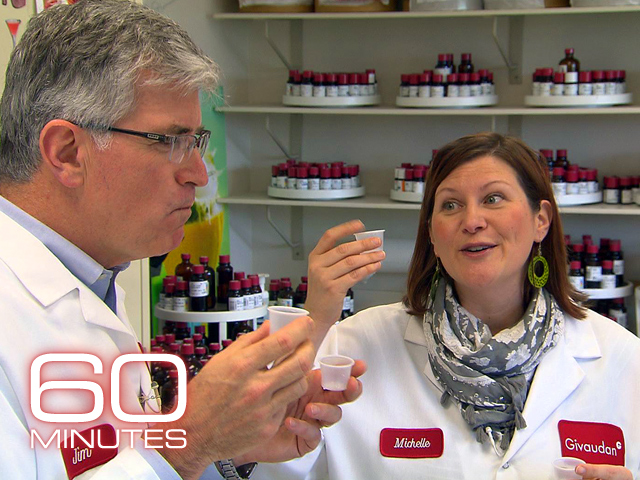 When you chug a sports drink or chew a stick of gum, you probably don't think of science. But there is a precise science - and a delicate art - behind what you're tasting. Morley Safer reports on the multibillion dollar flavor industry, whose scientists create natural and artificial flavorings that make your mouth water and keep you coming back for more.

The following is a script of "The Flavorists" which aired on Nov. 27, 2011. Morley Safer is correspondent, Ruth Streeter, producer.

As the Thanksgiving weekend comes to a close, you may feel as overstuffed as that turkey you ate. And if you're overweight - and the chances are, you are, it's probably because you eat too much, too much of the wrong stuff. Most of the wrong stuff we eat comes in a bottle, a can, or a box - food that's been processed - much of that food has been flavored.

The flavoring industry is the enabler of the food processing business - which depends on it to create a craving for everything from soda pop to chicken soup. It is Willy Wonka and his chocolate factory as a multibillion dollar industry; an industry cloaked in secrecy. But recently Givaudan, the largest flavoring company in the world, allowed us in to see them work their magic.

[Jim Hassel: So definitely an aroma, the mandarin, dancy tangerine. Real mild though. Not in your face.]

These are "super sniffers," "super tasters"...

...on the prowl. The special forces - first responders to the call for the next best taste.

They are braving the wilds of a citrus grove in Riverside, California, where Jim Hassel - whose nose and palette are legendary - leads a Givaudan team on a taste safari. Big game hunters in search of the next great taste in soft drinks. Their inspiration? The greatest flavorist of them all: Mother Nature.

Morley Safer: Like an artist going to Rome or something?

Safer: But the ultimate purpose is to sell more soft drinks or whatever?

Hassel: That's what we're in the business of, selling flavors.

Our perception of taste is largely located in the nose, but described in the language of music.

Dawn Streich: Do you get like a tropical note? A little bit of papaya? Potentially?

They are plotting how to move the flavors they find in this grove to your supermarket shelf and then on to your stomach.

When they find something they like, they extract its flavor molecules from the fruit on the tree. Then back in the lab, they mimic Mother Nature's molecules with chemicals.

Safer: Essentially what you do is, you take whatever this smells like--

Safer: And then I suppose you could-- if you chose to, you could, quote unquote, "improve on it."

The Holy Grail - a flavor so good you can't resist it.

Dawn Streich: In our fruit flavors we're talking about, we want a burst in the beginning. And maybe a finish that doesn't linger too much so that you want more of it.

Hassel: And you don't want a long linger, because you're not going to eat more of it if it lingers.

Safer: And then have more. But that suggests something else?

Safer: Which is called addiction?

Safer: You're tryin' to create an addictive taste?

Streich: Or something that they want to go back for again and again.

Food companies know that flavor is what makes repeat customers. So they commission Givaudan to create what they hope will be a mouthwatering taste.

Givaudan may be the biggest multinational you've never heard of. The Swiss company employs almost 9,000 people in 45 countries, providing tastiness to just about every cuisine imaginable.

Safer: There's a lot of secrecy involved in your profession, correct?

Hassel: Our intellectual properties are our formulas. So without that, we have nothing. So there's a lot of secrecy. You really don't want anyone to know.

Hagen: I create thousands of flavors. So I need somewhere to put them. And I have a lot of flavors in here.

Safer: What are these?

Hagen: Here are some oranges and tangerines.

Hagen: Raspberry's one of my favorite. I can't even fit all my raspberries on here.

Safer: How different can raspberries be?

And the flavor ingredients might not have ever met a raspberry.

All flavors are combinations of chemicals - artificial flavors are largely manmade. Natural flavors come from nature, but not necessarily from what the label implies.

For example, strawberry and vanilla flavor can come from the gland in a beaver's backside.

Hagen: So what we do is just manipulate them and create with them to give the impression of the papaya, or the strawberry.

Hagen is an illusionist, she has even created a flavor that mimics the taste and smell of an old oak tree.

Hagen: To give whiskey a little bit more depth sometimes, a young whiskey.

Safer: Oh, to give the taste of the barrel it was supposed to have been aged in.

Hagen: Yeah, yeah, in a younger whiskey. Yeah, you can add some cask notes, some oak notes.

Hassel and Hagen let us in on the alchemy of inventing a new flavor - this one inspired by a Hong Kong cumquat that the team found not in Hong Kong, but back in Riverside. It's a process using hundreds of different notes until they've created a symphony of taste.

Hagen: I mean with a name like Hong Kong cumquat you need to really have something going on, I think.

Hassel: I'm curious that--to--to see the carrot on top of the cumquat.

Hassel: You get the citrus but yet the carrot pokin' it's head out.

Hassel: But not overpowering

Hagen: That's really exciting. This is a homerun.

There's no shortage of metaphors in the flavoring business. Givaudan goes to the ends of the earth scouting for new flavors.

In Hong Kong, Givaudan convened their annual conclave of top chefs from restaurants around the world to demonstrate their latest creations. The goal: to turn those creations into new commercial flavors. The chefs mixed, chopped, mashed, steamed, sauteed and smoked for a week to create irresistible, cutting edge cuisine. Hong Kong chef Alvin Leung didn't disappoint.

Alvin Leung: It makes you want to eat this again, and again, again, okay? It's like sex, okay? You know, you want to do it over and over again until you get a headache.

The Givaudan team didn't just taste the food, they sniffed, photographed, analyzed and debated it. Then they applied them to beef and noodles and voila: a frozen dinner.

Matthew Walter: This is our translation into a frozen ready-meal that you can buy in the supermarket to really deliver a different eating experience.

Givaudan chef Stefan Strehler demonstrated how convincing these translations can be compared to the real thing.

Safer: It sure is. The-- it absolutely matches it.

Safer: This is crusty, fatty chicken.

Stefan Strehler: We just take a little skin here and then you smell like that now, you get much more of those fatty, crusty notes. And when you smell that flavor...

Safer: Now-- what is this? Is this actually chicken?

Stefan Strehler: It can be, yes. A lot of what you have in front of you is the chicken that has been translated into a flavor.

Translated on a grand scale, in the Givaudan plant in Kentucky.

Worker: This is a chicken flavor as a liquid in the tanks.

Safer: Chicken in the hose?

Worker: Chicken in the hose. We'll stretch this hose out and we'll actually load the liquid into these individual trays. It gets vacuum dried in the oven and it comes out in a dried cake form. We'll grind that into a fine powder.

Chicken, just like grandma used to make. It's used in soups, stews, sausage, noodle and rice dishes... chicken by the ton, chicken for every taste, our old friend crusty fatty... chicken for vegetarians... yes, chickens without chicken.

Ground zero for the food and flavor industry is the supermarket. Givaudan won't reveal which brands contain their flavors, but in this aisle, almost every product on the shelves has been enhanced artificially or with so-called natural flavors.

And not only that, virtually everything edible in a package, in a jar, or in a can is intensified with either fat, sugar or salt... or, all three of those little devils.

Dr. David Kessler: We're eating fat on fat on sugar on fat with flavor. And much of what we're eating with these flavors, you have to ask yourself, 'is it really food?'

Dr. David Kessler is the former head of the FDA. He is Dr. No. He's bent on getting America to kick its bad habits.

Kessler: We're living in a food carnival. These flavors are so stimulating, they hijack our brain.

Kessler believes flavorists are accomplices - the hired guns of the food industry.

Safer: But what-- what's wrong with that? Don't we want the richness of good taste?

Kessler: Of course. Food has to be pleasurable. It has to be desirable. But look around, Morley. Look around this country and what do you see? Ask the rest of the world how they view Americans and they will say, 'We don't want to look like them.'

Safer: Are you saying that the food industry and the flavoring industry together, are trying to make, and succeeding in making us, addicted?

Bob Pelligrino: There's no question we're trying to create an irresistibility and a memorability. I think, though, that there's then a leap to get to that leads to over consumption

Safer: Your critics say that you provide the means to seduce people into eating too much salt, too much fat, too much sugar and are responsible, partly, for the obesity in this country.

Pellegrino: Our business is to make taste experiences pleasurable ones. So, I don't think that the flavors create an overeating problem. I think that's a different issue.

Safer: But is it a different issue? Because surely what your clients want-- the food industry wants, is to provide the kind of flavor, that will make people want more.

Pellegrino: I don't think it's creating a desire for moreness (sic), as well as it's a desire for memorability so that people will repeat the purchases of the product and enjoy them.

But given the obesity epidemic, the food industry is beginning to respond to pressure for "lessness," if there is such a word, of fat, salt and sugar. And that's opening up a whole new business opportunity and another challenge for these alchemists of flavor.

Hassel: Everyone, everyone, everyone is working on health and wellness. How can you get a consumable, acceptable product that's better for you? And the challenge now is, how do you make 'em taste good?

Hassel: So, when you lower the salt, what can we put in that will make it taste like it did without salt? When you lower sugar, how can you make it taste sweeter without adding calories? So it's a whole new world, that didn't even exist ten years ago. But the consumers are interesting. As much as they want to be healthy, right, if it's not as sweet then I don't want it.

Safer: People are still going for the tried and true, heavy on sugar, heavy on salt, heavy on fat?

Hassel: Yeah, so I guess the real question is-- obesity going down? And I guess the answer would be no.