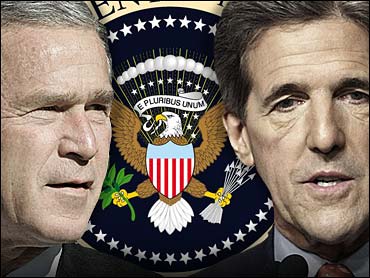 
From Albuquerque to Youngstown, President Bush and Sen. John Kerry have begun the final sprint for the presidency. Only about a fifth of U.S. states will see a member of either presidential ticket in the last days of Election 2004, but among the 11 remaining swing states, the candidates will be visiting three a day.

Though the candidates' stump speeches are routine, their tone is urgent. Like the campaign rallies, advertising means little at this point. With eight days left, the key factors are voter turnout and the events of the day – especially the news from Iraq.

"People have seen so much advertising that they just turn if off by now, and at this stage, the real news matters... particularly because this is such an extraordinary period in the world," said Marshall Wittman, a senior fellow at the centrist Democratic Leadership Council.

"If you turn on the nightly news and the first story is chaos, that favors Kerry, clearly," said Wittman, a registered independent and former senior aide to Republican Sen. John McCain.

With news events beyond the campaigns' control, the parties are focusing on their ground game in key states. Democrats appear to hold the registration advantage, but Republicans may be better organized at the local level.

"Moving folks to the polls on both sides is the important dynamic in the last week," Wittman said. "What we don't know is the 527 [partisan political groups] factor and whether that will match the Republican mobilization effort."

The star surrogates are already out. California's celebrity governor, Republican Arnold Schwarzenegger, will be in the crucial battleground of Ohio this week – no Republican has ever won the presidency without the Buckeye State.

Fresh off heart surgery, former President Bill Clinton was in Pennsylvania with Kerry on Monday to help galvanize the Democratic base. Shortly after, Mr. Clinton flew to Miami for a second rally.

Democrats are depending on a strong turnout in both Philadelphia and Miami to win Pennsylvania and Florida. Reflecting how pivotal Florida is to the Democrats, the party's 2000 nominee, Al Gore, was there this past weekend.

Nationwide, both parties are gearing up for fights at the polls. Generally, Republicans say they are intent on verifying that those who cast ballots are properly registered. Democrats are intent on defending the rights of their voters.

A look at the Monday schedules of both candidates illustrates just how manic the race has become in these final days.

President Bush attended a morning rally in Greeley, Colo., flew to Iowa for events in Council Bluffs and Davenport, and finishes the day in LaCrosse, Wisc. He will also appear on Fox News' "Hannity & Colmes" on Monday night.

Kerry started Monday in New Hampshire, attended a massive rally with Mr. Clinton in Philadelphia, then flew to Detroit. He finishes the day with a late-night event in Green Bay, Wis.

While both candidates are attempting to rally their bases, their end-game strategies differ somewhat: Republicans are trying to intimidate Democrats, while Democrats are trying to compensate for their candidate's perceived weaknesses.

"Karl Rove [Bush senior strategist] will be engaged in psychological warfare. He will try to suggest through surrogates that Bush is gaining momentum and gaining a significant lead," Wittman said. "Rove tried this by going to California in 2000 but it was undercut by the D.U.I. charge [against George W. Bush]. The reason for doing that is to demoralize the opponent and build momentum on their side. That's the clear Rovian strategy."

As an example of that, Vice President Dick Cheney today began predicting the outcome of the neck-and-neck race will go generously in Mr. Bush's favor. Speaking on NBC's "Today" show, Cheney said the final result will be "52-47 Bush." Neither Bush, Kerry or Democratic vice presidential nominee John Edwards have made similar predictions.

As for the Democrats, Wittman says they "will try to inoculate the candidate on the weaknesses. That explains the hunting shot last week with the geese and Kerry going to a church Sunday and giving a values speech. Then Kerry will use the Rovian strategy and go after Bush's national security credentials."

Illustrating Wittman's point, Democrats went on the offensive within hours of a New York Times report that 380 tons of "powerful conventional explosives" had disappeared from a former Iraqi military installation.

"The Bush administration must answer for what may be the most grave and catastrophic mistake in a tragic series of blunders in Iraq," Kerry campaign senior adviser Joe Lockhart said in an e-mail to reporters. "How did they fail to secure nearly 380 tons of known, deadly explosives despite clear warnings from the International Atomic Energy Agency to do so?"

Of those eleven states, Mr. Bush won five in 2000 and then-Democratic candidate Al Gore won six. Polls show the Big Three – Florida, Pennsylvania and Ohio – could go either way this year. Michigan leans to Kerry and is a must-win for Democrats.

The Small Three – Wisconsin, Minnesota and Iowa – were all won by Gore in 2000. But Republicans have made strong inroads. Iowa leans slightly to Mr. Bush while Wisconsin and Minnesota are split evenly.

A victory for Mr. Bush in those three states could only be offset by Kerry wins in Colorado, New Hampshire, New Mexico and Nevada. A Kerry victory in Nevada or Colorado is unlikely. Gore won New Mexico by the narrowest of margins (366 votes) in 2000; the state could go for either ticket this year.

With the focus on grassroots organization to seize every electoral vote, the Republican Party has the cash advantage. For every dollar Democrats have to spend, Republicans have two.

Meanwhile, the Bush-Cheney campaign had more than $22 million on hand and the Kerry-Edwards campaign had about $24.5 million.

Advertising spending at the close of the first week of October indicates the Kerry-Edwards camp is targeting Florida more than Bush-Cheney, while Bush-Cheney is targeting Ohio and Wisconsin to a larger degree, according to Nielsen Monitor-Plus and the University of Wisconsin Advertising Project.

The three other top markets for Republicans are Grand Rapids, Mich.; Reno, Nevada; and Albuquerque, New Mexico. But illustrating how badly Bush-Cheney wants to win traditionally Democratic Wisconsin, both Madison and Green Bay are among the top ten media markets targeted by the GOP in total expenditures.

Conversely, the Kerry-Edwards campaign is targeting markets predominantly made up of independent voters, like the central Florida corridor from Tampa to Orlando, and Davenport, Iowa.

Major cities in swing states – Albuquerque, N.M.; Denver, Colo.; and Columbus, Ohio – are also being targeted by Kerry-Edwards in an attempt to shave Republicans' advantage in the suburbs.

Ultimately though, the outcome of Election Day depends on a "narrow group of the electorate" in these 11 crucial states, said Wittman. And to Wittman, don't watch rallies in Albuquerque or Youngstown, look to the war in Iraq.

"It's not as if the terrorists are rooting for one side or the other, it's just what the situation is on the ground," he said. "The primary question on voters' minds is, 'Do I fire the commander in chief during a time of war?' That's why their assessment at a time of war may ultimately determine how the election turns out."