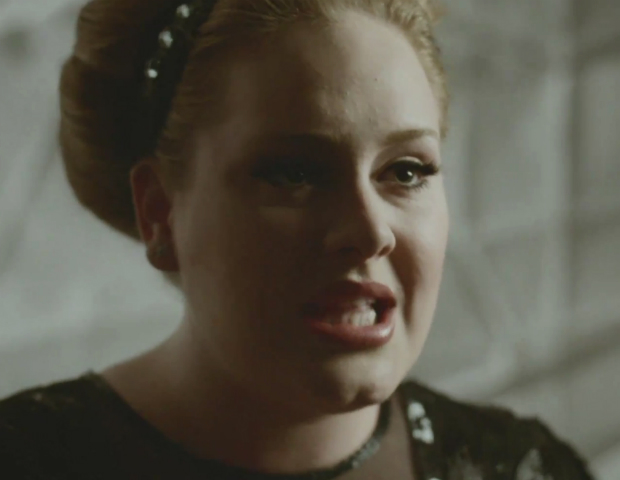 (CBS) - It's Thursday again, so without further ado, lets get this week's Feedback.

I'm going start off this week honoring the incredible run at #1 for the song of the year so far, Adele's "Rolling in the Deep." Other-worldly popular, her song was dethroned from its stranglehold on the #1 spot this week by Pitbull's "Tonight" featuring Ne-Yo and Nayer. And while we all struggle to understand how this pop artist from the UK can belt out such a wholesome and soulful sound, we must take notice of the beautiful simplicity behind both the video and the song's message.

Her entire album "21" reflects upon experiences from her life, namely her love life and past relationships, and her emotion definitely shows when she sings. But unlike the more somber and downtrodden "Someone Like You"  she displays incredible optimism and hope for moving on in this track.

Hats off Adele, for your incredible success, "Rolling in the Deep" is one of my favorite songs for the year and its video also captures a favorite spot as well.

Next up is a video of a YouTube trend that is really gaining popularity - a one-man edited-a cappella performance. Using only his mouth and body to make the sounds required, Alaa Wardi covers the Arabic song "Fi Hagat" by Nancy Ajram. Wardi's performance is heavily layered, accounting for every sound in the original and its elaborate editing creates an incredibly fluid yet complex video. Wardi's video and previous videos are likely the first example of this edited-a capella trend occurring for a song sung entirely in Arabic.

Staying with the cover theme, master violinist DSharp strings up Katy Perry's "Last Friday Night (T.G.I.F.)" How do you know D# is the real deal before he plays? Look at his violin. That fact, in and of itself should be enough to seal the deal, no one else can pull off a violin in those colors. He is an incredibly talented violinist and just tears apart K. Perry's hit.

Next is the video for the David Guetta hit "Where Them Girls At" featuring Flo Rida and Nicki Minaj. If you have followed my posts on NotSomeKid  at all, you know my obsession with Nicki's game. Her ability to change gears mid flow, rapping as her "egos" Nicki, Roman, and Onika, makes her sound remarkably unique, and frankly her ability put together killer verses on every feature is remarkable. This video also offers a bit more than your typical hot girl covered Guetta and Flo Rida videos, with dance infecting bubbles invading the city (lol).

New Coldplay. Their videos have always been a lot of fun and they especially like to mess around with the constraints of time, shooting just about the entirety of this video in stop motion. The song highlights the power that their old records contain to create the extraordinary, while this video follows the same mold breathing life into the dead and decaying shell of a city they are wandering through. I don't really want to know how much paint they used to create this video, but the ability of all of the colors to brighten up the mundane activities of everyday life sure does work.

To take a line out of Drake's book: last name "Ever," first name "Greatest." That is exactly what Eminem is. In my opinion the hands down best in the game, ever. His new video for "Space Bound" shot earlier this year off of last year's album "Recovery" is not without controversy though, in typical Eminem style. The song and video explore the Detroit MC fantasizing about murdering his girlfriend and committing suicide after finding out that she had been cheating on him. In part of the video two Eminem's appear on screen likely different versions of his subconscious.

Very similar to the "Love the Way You Lie" video, this time with deadly consequence, his video is being targeted by anti-violence groups for its excessive use of these evil themes. However you view the video's content, it is a jarring video, offering us another look into his troubled life. After watching the video a few times, its real accomplishment is leaving its interpretation entirely open. Was the entire ordeal imagined by Em, or was the distrustful version of himself the only one left after this unfaithful girlfriend killed the hopeless romantic inside of him? It's up to you to decide.

Oh yeah, I forgot to mention, the now seemingly ever present Sasha Grey co-stars in the video alongside Em.