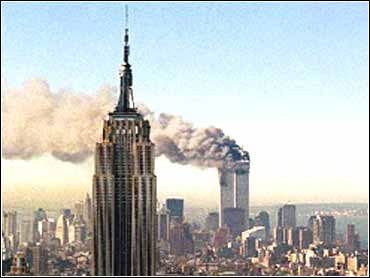 Here is a list of the 19 men the FBI says were the hijackers in the Sept. 11 terror attacks, along with information that has since been reported about each of the names on the list.

Investigators are reportedly checking the possibility that some of the individuals named on this list might be still alive, with a now dead hijacker having used their names.

Anyone with information about any of the 19 men on this list is asked to immediately contact an FBI field office or call the toll free hotline at 1-866-483-5137.

There is a report that authorities have a surveillance videotape which shows Al-Midhar meeting in Malaysia with one of the suspects in the October 2000 bombing of the USS Cole. He is a possible Saudi national.

Al-Midhar lived in San Diego last year, may have lived in New York, and at some point moved east, joining Gold's Gym in Greenbelt, Md., just weeks before the attack.

Al-Midhar had a B-1 visa - covering business travel and good for up to a year - and an expired B-2 visa, a travel visa which was good for one year.

He is a known associate of Nawaq Alhamzi, with whom he bought a car in 1998, a Toyota Corolla with California license plates. Both men took flying lessons at Sorbi's Flying Club in San Diego, asking to learn how to pilot Boeings, but were told they'd have to first master flying Cessnas and Pipers. A flying instructor says Al-Midhar had difficulty learning flying basics and at times would become afraid and start praying to Allah.

In Sept. 2000, Almihdhar and Nawaq Alhamzi rented a room for a few weeks from Abdussattar Shaikh, a retired English professor at San Diego State University and co-founder of San Diego's Islamic Center. Shaikh, who authorities say is not a suspect, called the FBI after the terror attacks. Agents confiscated his computer, which they believe was used by Nawaq Alhamzi to communicate in Arabic in various chat rooms.

It has been reported that he worked out at Gold's Gym in Greenbelt, Md., between Sept. 2 and Sept. 6, as did Khalid Al-Midhar, Nawaq Alhamzi, Salem Alhamzi, and Hani Hanjour.

A gym employee says despite his sales pitch for the men to join, two paid by the day, to work out with weights and machines, and three bought weeklong memberships, paying with "a wad of cash."

Moqued, along with Hani Hanjour, is seen in a photo from a video surveillance camera, using an ATM machine on Sept. 5 in Laurel, Maryland.

He is a possible Sudi national.

An associate of Khalid Al-Midhar, with whom he bought a car - a Toyota Corolla, took flying lessons in San Diego, and shared a room, also in San Diego, from which authorities have seized a computer they believe he used for chat rooms on the web.

Alhamzi got his San Diego landlord, who is not a suspect, to help him open an account at the Bank of America and also show him how to post a personal ad on the Internet, in English, seeking a Mexican wife. The ad got no responses.

The instructor at the San Diego flight school says Alhamzi and Al-Midhar were with two other men with first names that sounded like "Hani."

While in San Diego, he is believed to have lived in Parkwood, an apartment complex in Clairemont, where the manager says he was a model tenant, prompt with the rent, who often stopped by for coffee and cookies.

The FBI believes he may also have lived in Fort Lee, N.J., and Wayne, N.J. He was in the group that worked out at Gold's Gym in Greenbelt, Md., the week before the attacks and on Sept. 1, stayed at the Pin Del motel in Laurel, Md., signing the register with a New York address and driver's license.

Salem Alhamzi is believed to have lived in Fort Lee, N.J., and Wayne, N.J., and was one of the group that worked out at the gym in Maryland the week before the attacks.

Hanjour, who may have used several spellings of his name, is believed to have been the pilot who slammed the plane into the Pentagon. He is believed to have lived in Phoenix and San Diego, took English lessons in 1991 at the University of Arizona, and in 1996 might have lived in Oakland, Ca., and spent at least one month in Miramar, Fla., staying with a family who saw him as a "kind and gentle man" who liked children.

A report says that a Hani Saleh Hanjoor was listed as living at the Valle Cita Garden Apartments in north Phoenix; the apartment complex manager says there's no record of any tenant by that name.

FAA records show that a Hani Hanjoor received a commercial pilot's license in 1999, listing a post office box in Taife, Saudi Arabia, as his address.

That Hanjoor took flight lessons at CRM Airline Training in Scottsdale, Az., in 1996 and 1997, leaving without taking all of the classes for which he had paid.

Hanjoor might have been one of the two men seen by the San Diego flight instructor who taught Khalid Al-Midhar and Nawaq Alhamzi.

Hani Hanjour was a member of the Sawyer School of Aviation's flight simulator club in Phoenix, which gives members unlimited use of a flight simulator, for $200 a month.

The FAA Airmen Directory lists a Jani Saleh Hanjoor as having had a student pilot license, with an address corresponding to the CRM flight school.

In te six weeks before the attack, Hani Hanjour took flying lessons at Freeway Airport in Bowie, Md., where instructors thought his skills were so poor they refused to rent him a plane.

He was part of the group that worked out at the gym in Greenbelt, Md.

Al Suqami said his date of birth was June 28, 1976, and that he was from the United Arab Emirates. He had a Florida driver's license with a Boynton Beach address and said that his previous license was from Saudi Arabia.

Alshehri is said to have given seven different dates of birth for himself on various documents, ranging from 1974 to 1979. He's believed to have been in the U.S. since at least 1994, when he got a Social Security card and a Florida driver's license.

Besides Daytona Beach, he is believed to have lived in Hollywood, Fla.; Boynton Beach, Fla., where a neighbor describes him as a nice guy who was a fan of the Florida Marlins; and Vienna, Va., at a boarding house three blocks away from the headquarters of the Central Intelligence Agency.

Alshehri is said to have moved out of the boarding house 14 months ago, telling the landlord he was returning to Saudi Arabia, his homeland.

The week after the hijackings, the FBI raided a hotel in Newton, Ma., a Boston suburb, on suspicion that both Waleed Alshehri and Wail Alshehri stayed there on Sept. 10.

Alshehri, who is believed to have been a pilot, gave his date of birth as July 31, 1973, and may have lived in Hollywood, Fla., and Newton, Mass.

He is a possible Egyptian national.

Identified by the FBI as the man who piloted the first plane to crash into the World Trade Center, Atta is said to have met early this year with the head of the Iraqi intelligence service, a report Iraq denies.

Atta, who had an Egyptian driver's license, is also reported to have met with several Islamic extremists at a hotel at the Spanish beach resort Salou.

At times he used the name Mohamed El-Amir, as he did for eight years while an electrical engineering student at the Technical University in Hamburg, Germany, where he had ties to an Islamic group that planned attacks on Amrican targets, and lived with Marwan Al-Shehhi, a cousin who also appears on the FBI's hijacker list.

The two men are believed to have arrived in the U.S. in May. Atta lived in Venice, Coral Springs, and Hollywood, Fla., where he may have used public computers at two libraries, and where he and Al-Shehhi were spotted partying the Friday before Sept. 11, playing video games and drinking.

Both men trained as pilots at Huffman Aviation in Venice, where they lived together, and practiced on Boeing 727 flight simulators at SimCenter in Opalacka, Fla.

Based on an eyewitness identification, investigators believe Atta was one of a group of five men holed up in the Valencia Hotel in Laurel, Md., in August and September, driving an older model Toyota Corolla with California license plates.

Video surveillance photos of the airport in Portland, Me., show Atta and Abdulaziz Alomari rushing to make a flight from Maine to Boston early on the morning of the hijackings.

Seen with Mohammed Atta on airport surveillance video, Alomari is said to have used both Dec. 24, 1972 and May 28, 1979 as his date of birth. He is believed to have been a pilot and a flight engineer who listed an address in Jeddah, Saudi Arabia and said he at one time worked for the aircraft maintenance company Saudi Flight Ops, at JFK Airport.

Alomari may have lived in Hollywood, Fla. and is reported to have lived with his wife and four school-age children in a rented house in Vero Beach, Fla., moving out on Sept. 3, telling his landlord he was returning home.

Al-Shehhi, 23, was a cousin of Mohammed Atta, lived with him in Germany and Venice, Fla., the two men taking flight training at the same schools in Venice and Opalacka, Fla. He used May 9, 1978 as his birthdate.

In Hamburg, he had ties to an Islamic group which planned attacks on American targets and a senior official in the United Arab Emirates says authorities are checking the possibility that he might have been a member of Osama bin Laden's Al Qaeda terrorist group.

Born in the United Arab Emirates, the son of a Muslim cleric who died two years ago, Al-Shehhi was described as extremely religious and withdrawn.

While in Germany, he told his mother he would not return to the Emirates. She has said she thought someone was listening to their calls and threatening him to keep him from coming home.

Boeing 757 manuals and East Coast flight maps were found in a Deerfield Beach, Florida, motel where Al-Shehhi is believed to have stayed. Separately, it is reportd that Al-Shehhi and Atta were spotted in Switzerland last summer, buying pocket knives and box cutters, the weapon of choice in the Sept. 11 hijackings.

May have lived in Delray Beach, Fla. The Spartan School of Aeronautics in Tulsa, Okla., is listed as the address on his pilot's license but the school says there is no record that he ever took a class there. Mohammed Atta and Marwan Al-Shehhi are reported to have visited that same flight school, considering it for training, which they then pursued elsewhere.

Is believed to have been a pilot.

According to motel records, a man by that name used a credit card to pay for a late August stay at the Pin Del motel in Laurel, Md., where Nawaq Alhamzi stayed in September. Jarrah gave a Florida address and driver's license number when he registered at the motel.