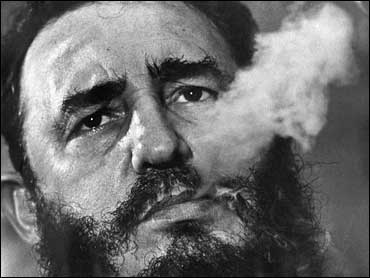 Fidel Castro has been one of the cruelest dictators in living memory. He has also been the longest-"serving." What has Castro served? Repression, torture, and murder. He seized power in January 1959. He is now "retiring," just short of his 50th year in power. His golden jubilee will surely be marked, regardless; seldom have 50 years been less golden or more awful.

Castro and his fellow revolutionaries overthrew a bad regime, that of the dictator Fulgencio Batista. Castro installed a much worse regime, with himself at its head. Before taking over, Castro promised an open and democratic society with respect for all people. He immediately betrayed that promise - and imprisoned many of his comrades who clung to the democratic dream. Others managed to flee to the United States.

Castro has always ruled under the label of Communist, and he has indeed run a Communist regime. But some of those who know him well say he was never a Communist - always a fascist, right from the beginning: a psychopathic fascist. By the time he came to power, fascism was discredited, so Castro rode the Communist wave. What he has been is a thug and a dictator, demanding absolute power.

Senator Fulbright said famously that Castro "is a thorn in the flesh," but not "a dagger in the heart." That may be true as far as the United States is concerned, although Castro allowed his territory to serve as a base for Soviet missiles, nuclear dagger pointed at the heart of America. He also supported Communist insurgencies around the world. He has unquestionably been a dagger in the heart of the Cuban people. His economic policies have immiserated them. And when his subjects have dared to dissent, he has dealt with them ruthlessly: His prisons are full.

Almost every day, Cubans risk their lives, climbing into makeshift boats, braving shark-infested waters. They might die at sea; and if they are recaptured by Cuban authorities, they may wish they were dead. Why do people take such chances? That should tell us something about life on Castro's island.

In 1984, Armando Valladares published his book Against All Hope - a prison memoir that reminded many of Solzhenitsyn's work. After Solzhenitsyn - after The Gulag Archipelago - it was impossible make a moral argument for the Soviet Union. Valladares should have finished off Castro and Castroism. But the old beast has always had his legions of Free World admirers.

The late Jeane Kirkpatrick found Castro's popularity among the free world's elites "both a puzzling and a profoundly painful phenomenon of our times." And this has been most painful for Cuban exiles in the United States.

They point to a couple of things that others might consider small (and that are, indeed, small, relatively speaking): People call Castro "Fidel," giving him a kind of cachet. ("Fidel!" "Che!") They never call Pinochet "Augusto" ("Gus!"). We have also called Cuba's dictator "President Castro," giving him a democratic title that serves his own needs, but not those of truth.

People like to say that Castro "outlasted ten presidents." But Castro, unlike those men, never faced an electorate - nor did he govern with a real constitution. Apologists have always claimed that he is popular among Cubans. Oh? Then why not demonstrate that with free elections?

Castro has long had his champions - apologists - in the media, beginning with Herbert S. Matthews of the New York Times. He did much to give Castro his world reputation and elevate him to power. Indeed, two years ago a book about him was published called The Man Who Invented Fidel. Others who championed Castro include Ted Turner of CNN. Cubans and Cuban Americans have always pointed to CNN with special sorrow. Also to the Associated Press.

And liberals, especially from Hollywood, have always paraded down to Havana, to toast and coo at the dictator. Carole King sang "You've Got a Friend" to him - and he has a great many. Robert Redford, Jack Nicholson, Leonardo DiCaprio, Danny Glover, Woody Harrelson, Kate Moss, Naomi Campbell: All have been there. Campbell hailed Castro as "a source of inspiration to the world." She and other celebrities are now devotees of Venezuela's Hugo Chávez, who campaigns to be Castro's replacement on the world scene.

And Castro has his friends and champions in American politics - particularly Reps. Charles Rangel and Jose Serrano, both of New York. Rangel, a press pet, would literally embrace Castro when the dictator came to New York to perform at the U.N.

Some years ago, Rep. Lincoln Diaz-Balart, a Cuban American, was moved to say, "For the life of me, I just don't know how Castro can seem cute after forty years of torturing people." Castro has extended that by almost a decade.

Castro may now have bowed out, but his dictatorship, and Cuban Communism, are firmly in place. People ask: To whom will the island "transition"? Castro's brother, Raúl? Ideally, the island would transition to democracy: to the Cuban people themselves. But a say in their own destiny does not seem in the offing anytime soon for the Cuban people.

Fidel Castro, who has sent so many others to premature graves, will die in bed. He will also die in power, in the hands of his men. And his name is one of the most famous in the world. The names of his political prisoners are virtually unknown - although President Bush did his best last year when he gave one such prisoner, Dr. Oscar Elías Biscet, the Presidential Medal of Freedom. May names such as Biscet's shine in the future, and may Castro's molder in the dust.
By the editors of National Review Online
Reprinted with permission from National Review Online