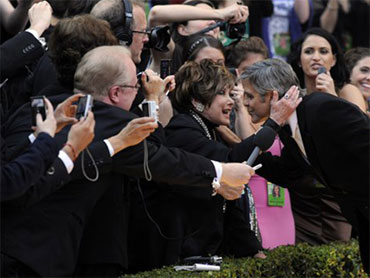 Sandra Bullock moved serenely down the red carpet at Sunday's Oscars, smiling and joking with media jammed in behind a hedge.

"It's been a crazy two months and I think we're all just happy to be here. I've been with these people, I feel like, more than I have with my husband," she said, looking over her shoulder at hubby Jesse James, whose black motorcycle boots coordinated with his black tux and tie.

The best-actress nominee for "The Blind Side" won a Razzie on Saturday for worst actress in the romantic comedy flop "All About Steve." Bullock was the rare A-list star who attended the awards that spoof the Oscars.

"I got no sleep and that's why I'm tired today, but it's making me relaxed," she said.

George Clooney knows the kind of career boost that winning an Oscar can bring. It happened to him in 2005, as the supporting actor winner for "Syriana."

He went into Sunday's Academy Awards with a good idea of what wasn't going to happen for him and his nominated "Up in the Air" co-stars Vera Farmiga and Anna Kendrick.

"It's probably not going to be Vera or Anna, and it's certainly not going to be me," he said on the red carpet before going into the Kodak Theatre. "But what you do know is that a nomination for Vera and Anna changes their career. They will suddenly be first on the list to get jobs and that is a tremendous jump in their careers."

Clooney was accompanied by his girlfriend, Italian actress Elisabetta Canalis. Tucked inside his tuxedo was a little treat to get through the long ceremony - a sterling flask with his monogram, GTC.

There are many reasons why George Clooney is one of the most popular stars in Hollywood: the crinkles around his eyes when he smiles, his soothing voice and his deep brown eyes.

But he's also one of the most generous celebrities on the Oscars red carpet. He bounded across the red ropes Sunday to the bleachers with a pen in hand, ready to shake hands and sign autographs. The fans leaped out of their seats to get a glimpse of him, pressing toward the carpet that ran into the Kodak Theatre.

After he signed a woman's security badge, she held it up in the air triumphantly and fans cheered for her.

"That was super-duper nice. That's what they all should do," said Pauline An, a stay-at-home mom from Golden, Colo. "I talked to Mary Hart, shook George Clooney's hand and Jason Bateman waved to me. It's a good night."

"I was watching you earlier," Streep said with mock gravity on her way into the ceremony at the Kodak Theatre.

The actress, who is nominated also for best actress for her performance in "Julia & Julie," chastised Seacrest for "cheerleading a little," but added: "That's all right."

Then Streep, referring to Bullock, gave in: "I'm in love with her, as is everyone in America. I kind of have been pulling for all the young gals."

The Oscars were a little bit country this year.

"Crazy Heart," which stars Jeff Bridges as an aging country music star, was the most obvious presence on the red carpet at Sunday's ceremony. Bridges was nominated for best actor, Maggie Gyllenhaal was nominated for best-supporting actress and the song "The Weary Kind" by Ryan Bingham and T-Bone Burnett was up for best song.

But Tim McGraw, co-star of the best-picture nominee "The Blind Side" was also in attendance with his wife, Faith Hill. McGraw plays the husband of Sandra Bullock's character in the film.

Miley Cyrus was also at the Kodak Theatre to present an award. She came with her mother, Leticia Cyrus, but not her father, Billy Ray Cyrus.

"Last time I was here, I was with my dad," the young pop star told E!'s Ryan Seacrest. "He kept stepping on my dress, so I'm hoping that doesn't happen again."

In a throwback to more competitive days, Academy Award presenters rehearsed the line "and the winner is ..." instead of the blander "and the Oscar goes to ..." for Sunday's show.

The last time the language was used officially was for the 60th Academy Awards in 1988, when "The Last Emperor" won for best picture. The following year, show producer Allan Carr changed the wording, although some presenters ignored the new guidelines.

"His goal was to make it not seem as competitive," said Lucia Schultz, the motion picture academy's librarian. Other awards shows also followed suit.

Although academy staff would not confirm the change before Sunday's telecast, presenters have been using the phrasing all week.

At rehearsals on Saturday, Tom Hanks noticed the change and said, "You're breaking the mold here guys."

During his rehearsal, he joked around saying, "The Saturday Oscar goes to ...," and "the winner of the fake Oscar is. ..."