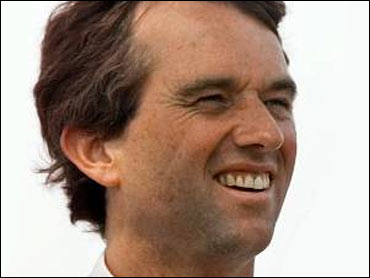 In 1991, 16 years after Martha's murder, the case was revived when a new investigator started taking another look at the Skakels.

With the focus back on his family, Rushton Skakel did something extraordinary: He tried to clear the family name.

He hired his own team of investigators to look into Martha's death, and their results became known as the Sutton Report. The key findings focused on Littleton as well as Tommy and Michael Skakel. But the effort backfired after the report, for the first time ever, pointed a finger at Michael.

"Michael lied to the police," says Levitt. "Michael's story was he's gone to the Terrians, he comes home at 11.30 p.m. and then he goes right to bed."

But,he told Sutton investigators that it was not all he did that night. Around midnight, Michael said he was drunk and wanted to see Martha. He went out, climbed a tree outside Martha's window, threw stones at the window and then masturbated in a tree. While climbing down, he said he heard voices right around where the crime scene took place, and ran home.

Michael even made a tape recording of that story in a 1997 book proposal for a tell-all biography: "I remember thinking, 'Oh, my God! If I tell anyone I was out that night, they're going to think I did it.'"

When former L.A. detective Mark Fuhrman was leaked a copy of the Sutton report, he wrote the best seller, "Murder in Greenwich," naming Michael as Martha's killer.

"Michael Skakel puts himself at the crime scene, and Michael Skakel makes admissions that only a murderer would make," says Fuhrman.

Just one month later, in June 1998, prosecutor Jonathon Benedict called for a special grand jury to hear evidence about the case. The grand jury heard some explosive testimony, much of it from Michael's former classmates at the Elan Reform School. Several of them also dropped a bombshell -- that Michael had confessed to killing Martha.

"The first words he ever said to me was, 'I'm going to get away with murder. I'm a Kennedy,'" says former Elan student Greg Coleman. "He made advances to her, and she rejected his advance. He drove her skull in with a golf club."

In January 2000, after hearing testimony from several Elan students and others, the grand jury indicted Michael for the murder of Martha Moxley.

When Michael finally went to trial, the rest of his family was convinced he would be found not guilty. After all, Michael had an airtight alibi, and there wasn't a single shred of physical or forensic evidence that linked him to the crime. His brother, David, thought that finally the family name would be cleared once and for all.

"We were worried that without a trial we could never fully get closure in clearing his reputation," says David. But when the jury returned their guilty verdict, the Skakel family was left shocked and devastated.

"It's a feeling of disbelief," says Stephen. "I love my brother and I believe in my brother 100 percent."

"For me, to come out publicly to defend somebody that basically everybody in the country feels is guilty of murder is, from a personal strategy, not probably a good choice for me. But I know he's innocent."

Since last June, Stephen Skakel spends every Saturday morning driving 60 miles from his home to Cheshire, Conn., to visit his older brother Michael in prison.

"Being able to see him face-to-face makes all the difference," he says. "To let him know we're still here and still fighting for him."

At 36, Stephen is the youngest of the Skakel children. He was just 9 years old when Martha Moxley was murdered. Since the conviction, he has taken the lead in the fight to clear Michael and the Skakel family name: "There's only so much people can take, and we've taken it for 30 years."

Even more outspoken, however, is Skakel's cousin, Bobby Kennedy.

"He doesn't deserve to be spending 20 years of his life in jail for a crime he didn't commit," says Kennedy.

Although they were not close as kids, as adults, Bobby Kennedy and Michael Skakel shared a similar history – problems with addiction. Kennedy says he became close to Michael in 1983, when he first got sober. By then, Michael had already been sober for a year or two.

"I spent a lot of time with him, and we had a very, very strong relationship," remembers Kennedy.

Kennedy spent six months investigating the case for an article he wrote for The Atlantic Monthly. He says he wrote the article for Michael's son, Georgie: "He's going to grow up with most people in this country thinking that his father murdered a girl, and he didn't do it."

To Kennedy and the Skakels, the case against Michael was thin from the beginning. To them, the strongest piece of evidence was that Michael had an alibi – that he was across town watching "Monty Python" when the murder occurred. This alibi always has been supported by several relatives.

"I took a lie detector test in which I was asked who was in the car that went to my cousins, the Terrians, who live about eight miles away," remembers brother John, who says he convincingly passed the test. "And Michael was, in fact, in the car. That was my response."

John's 1975 polygraph results, however, were inadmissible in court. What was allowed into the trial, though, was the damaging testimony of two former Elan students: Greg Coleman and John Higgins.

The prosecution contended that 17-year-old Michael openly talked about the murder while attending the Elan school, where he was sent to because of a 1978 drunk driving incident.

When Michael's defense attorney asked Coleman why he had changed his story, Coleman admitted that prior to facing the grand jury, he had taken 25 bags of heroin. Coleman died of a drug overdose just before the trial. But a tape of his previous testimony was played for the jury.

Higgins, who Kennedy said was an Elan bully who tortured Michael at school, testified at the trial. Higgins, who refused our request for an interview, said Michael had also confessed to him.

Kennedy and the Skakels believe that Michael could have gotten better representation, and that his attorney was distracted by the media and failed to present key points in his defense

"This was such an easy case and it was such an obvious case," says Kennedy. "There's clearly reasonable doubt."

The Skakels also say the jury only saw pictures of Michael when he was 18 years old, a much bigger and stronger person than he was at the time of the murder.

"Nobody ever strongly suspected Michael of committing this crime because he was a tiny waif of a kid back then," says Kennedy. "He was the smallest person in his class. He was either smaller than Martha Moxley or exactly her size."

Stephen agrees, saying that Michael, who was 15 when the murder took place, lacked the strength to bludgeon Martha to death and then drag her body 70 feet to where she was later discovered.

However, the worst day of all for the Skakel family and Michael's defense attorney, was the day of closing arguments.

Prosecutor Jonathan Benedict transcribed and played Michael's own words from his book proposal over gory photographs from the crime scene. "We needed to connect the dots and that's what I did," says Benedict.

"The prosecutors in the case used a very, very sophisticated multimedia technique at the end of the trial," says Kennedy.

John Skakel, who was in the courtroom, says Benedict's closing argument distorted Michael's own words into a confession: "We all felt sick."

So, if the family is so convinced of Michael's innocence, who do they believe committed the crime?

"I don't think anybody knows except for the killer, but I can make a strong case against Ken Littleton," says Kennedy.

"He was rather an aloof individual," remembers Stephen. "The first thing that stood out for me was his size. The guy was in good shape."

At the time of the murder, both Littleton and Tommy Skakel said they were watching a movie together. But Kennedy says there were some inconsistencies in Littleton's story.

"The accounts by various people of when certain things happened give enough leeway that Kenny Littleton could have been outside of the house at 10 o'clock," says Kennedy.

In fact, a security guard in the neighborhood helped police put a composite together of a man seen wandering around at the time of the murder.

"There's the sketch we believe has a strong resemblance to Ken Littleton," says Stephen. "They're both wearing glasses. No one in our family at that time wore glasses."

The sketch, however, was never introduced into evidence – and came to the Skakels' attention after the trial.

What the Skakels did have (but was inadmissible in court) were the results of Ken Littleton's lie detector tests -- tests Kennedy says Littleton failed.

"The relevant questions are 'Did you cause those injuries to Martha Moxley?' and 'Did you have a golf club in your possession on 30 October 1975,'" remembers polygraph examiner Robert Brisentine, who administered one of the tests. "He answered 'no' to each of those. The charts revealed that he was practicing deception."

After nearly 50 years on the job, Brisentine felt Littleton was hiding something: "I could definitely say that he was involved and that it appears that he wielded the weapon or golf club that killed her. But if he didn't, he was standing right next to the person who did."

Under suspicion, Littleton left the Skakels' employment eight months after the murder. And his life basically unraveled from there.

"His behavior changed radically after the crime was committed," remembers Kennedy. Littleton was arrested over the years for a variety of offenses including burglary, DWI and shoplifting.

Kennedy: "He's been in jail and mental institutions almost continuously since."

Littleton eventually married and had two children, but he remained a suspect in the Moxley murder case for 23 years.

A Family's Defense
The Prosecution's Case