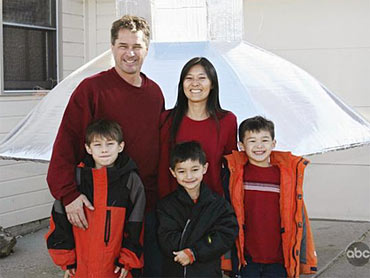 The family of a 6-year-old boy who set off a nationally televised scramble when he was thought to be in a balloon over Colorado has been featured twice in the ABC show "Wife Swap."

Falcon, the son of Richard and Mayumi Heene of Fort Collins, Colo., after authorities spent Friday afternoon looking for the boy. Falcon's family was last on "Wife Swap" in March, favorites of the audience who had voted to have them featured again on the show's 100th episode.

When they first appeared last fall, the Heenes were described as storm chasers who lived on the edge and were matched with a Connecticut family who considered safety to be paramount.

Viewers later voted for two families who had previously appeared on the show - including the Heenes - to be featured in a special 100th episode swap in March. ABC called the family "science-obsessed."

"When the Heene family aren't chasing storms, they devote their time to scientific experiments that include looking for extraterrestrials and building a research-gathering flying saucer to send into the eye of the storm. In this ultimate swap, the Heenes swap lives with a psychic mom who speaks to the dead and can control the weather, her husband and her children -- who believe they are destined to be star," the promotional copy read.

Father Richard Heene is an amateur scientist and storm chaser, according to a 2007 Denver Post profile. He is a co-author of the Web site The Science Detective.

The balloon saga captivated people around the country as they stopped to watch the jaw-dropping sight on television of the aircraft gliding through the air. Some wondered if the whole episode was a hoax.