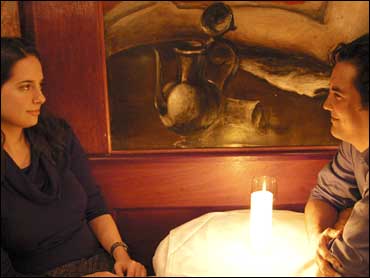 CBSNews.com's Gina Pace reports on a new singles dating idea in New York City. As she reports, it's all in the eyes.


There are hundreds of bars packed with singles trying to chat up potential mates in New York City. Recently, in a East Village bar, 32 strangers stared silently into each others eyes.

They were trying to prove grandma's old adage: when you lock eyes, you'll know.

I, however, found it disconcerting. I had never looked at this man before in my life. As I sat gazing into his eyes, I could only rely on the slightest facial expression or shift in body language to gauge what he was thinking. Did that slight smile that flashed across his face mean he is interested? He's fidgeting – does that mean he's nervous? Could he tell I had a boyfriend?

Looking across the candlelit table in the warm, red room with a painting of nudes drinking wine behind us, I wondered why he came here tonight. What was he looking for?

I won't ever know, because I never said a word to him. I saw him at an "Eye Gazing Party," the newest option for New Yorkers hoping to find that elusive spark without the painful chitchat of numerous bad dates.

It's a lot like speed dating with one catch – no talking is allowed. People split into pairs and look into each others eyes for three minutes; then switch partners and stare again until everyone has gazed into the eyes of about 10 people. Afterwards, there's a party where you can talk to the person who caught your eye.

Eye gazing is the brainchild of Michael Ellsberg, who edits book manuscripts and lives in New York. As a single guy, Ellsberg was sick of going out to bars and hearing permutations of the same conversations: Where are you from? What do you do? Do you like New York?

"I thought there has to be a better way to connect with people," Ellsberg said.

Having studied salsa, Ellsberg knew the power of eye contact to connect with people on the dance floor; he thought it could apply to dating. Eye gazing was born.

Interested in his idea, I recently attended his inaugural eye gazing party. He had invited seven people and asked them to bring friends, bringing the group to about 30 singles in their 20s and 30s. Well-dressed young professionals, many who worked in finance, trickled in to a bar on the Lower East Side about an hour before the gazing was to start. Ellsberg wanted people to drink to lower their inhibitions and make staring at each other seem less, well, weird.

For me, mingling at a cocktail party is an uncomfortable experience. So the idea of staring at strangers for 30 minutes terrified me. Ellsberg convinced me that I should give it a shot — nothing could be that bad for a half hour.

Albert Pope, who works for an investment bank in Stamford, Conn., had a much better attitude.

"It's stretching a little bit socially, but you might meet interesting people," he said before the gazing started. "It attracts people confident enough to be looked at and look at someone."

Linda Minami, an administrative partner in a finance firm, was a little nervous; but she said checking out the crowd beforehand helped.

"I was expecting enormous pools of eyes and to get caught in some Svengali stare," she said. "But it'll be completely safe. You've got your clothes on and you're vertical."

As I sat down to hear Ellsberg explain the rules, I got even more nervous. I have a live-in boyfriend, and was about to participate in what he has been calling "Flirt Fest 2005." Surely, the windows to my soul would be veiled in deception.

"The first 20 to 30 seconds you do this are going to be really weird," Ellsberg said to the gazers. "It's going to be one of the weirdest things you have ever done."

He said most people get uncomfortable when they think of staring because it's usually accompanied by an aggressive facial expression: someone staring on the subway, or a lusty leer at a bar. He suggested a neutral facial expression; don't make extra efforts at smiling; focus on one eye at a time to avoid going cross-eyed.

Ellsberg had us ease in at 10-second intervals. He was right – it was weird. First off, I was stone-cold sober, with inhibitions running on high. The room seemed to get about 20 degrees warmer and I became convinced that I had something hanging from my nose. I realized I wasn't alone when one woman burst out into laughter.

Women sat on one side of the tables, and the men moved from table to table as each song played, usually salsa or samba.

It got easier after the first few minutes, and with each new gazer. I could begin to focus on each person I was looking at. There are definitely good and bad gazers. Some were very relaxed and just looked in a calm, non-threatening way. Others fidgeted, or put their chin on their fist in a glamour shot pose. The worst was when someone leaned really far over the table — I'd invariably lean as far back in my chair as I could.

One of my partners, Ryan Parks, told me after that I was not very good at gazing.

"You were hard," he said. "I was asking but not getting any answers. Why are you so sad? I'm thinking maybe you're not now — because you're smiling, but I thought I saw a little bit of sadness."

Parks thought he was going to hate eye gazing, but was pleasantly surprised.

"When people ask us why we like someone we date we say, 'Oh, they have a cool job or they like to travel.' But you know what? The people we hate do that stuff too," he said. "There's some intangible quality, and maybe this is getting us closer to that, or closer to it sooner."

Pope thought eye gazing was a "building experience." After looking at a woman, he thought he saw a cross out of the corner of his eye. Assuming she was a devout Catholic, he thought he'd never be compatible with her.

"It turns out she was a Middle Eastern Jew," Pope said. "I realized how prejudiced I was. I thought, 'What am I doing here? All these things I think I want, I don't even know.'"

Ellsberg was pleased with the first party. And he was right — it did seem to break the ice. Afterwards, people were standing talking, some pairs sitting at tables deeply immersed in conversation.

"It was so satisfying to me," said Ellsberg, who once planned to turn Eye Gazing Parties into a business. "In some ways, it was so special that I didn't want to introduce a profit motive towards it because then people come with a different attitude — all the sudden it becomes a business transaction."

He wants to throw different types of eye gazing parties for older singles, gay and lesbian singles and Jewish singles.

After the gazing, Minami said she could learn a lot about someone just by the way they presented themselves — that she could study character just through the face and body. She didn't find anyone that she immediately wanted to date — but some people with possible potential.

While Minami thought it was an interesting night and definitely a conversation starter, she's not sure she'd do it again.

"Well, I guess it's better than staying home at night," she said.

As for me? If I didn't have someone waiting for me to get back from "Flirt Fest 2005," I would have stuck around longer. The people at the party were adventurous enough to try staring at complete strangers and open enough to try to find in a gaze a flicker of romance. Try finding that at the hundreds of other bars in this city.