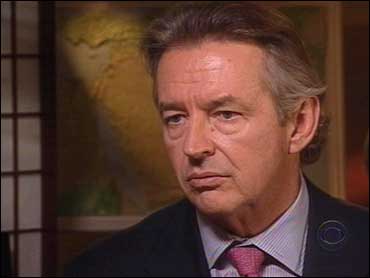 For 18 years as an undercover agent for the CIA, Valerie Plame Wilson kept her occupation and her identity a secret, even to her own friends and family, to avoid compromising her work as a spy.

When she was exposed two years ago, it led to a federal investigation and raised questions about what would motivate such a betrayal. Would someone in the government go that far, leak her name to the press, in retaliation for her husband's public criticism of the war in Iraq?

The special prosecutor in the case, Patrick Fitzgerald, did not answer that question on Friday when he charged the vice president's Chief of Staff Lewis Libby with lying to the investigators who were trying to find out how it could have happened.

But 60 Minutes wanted to know how serious was the damage done by the leak.

The woman at the center isn't talking. But 60 Minutes Correspondent Ed Bradley did hear from her husband, her friends and fellow agents who knew her work, and helped us understand what happens when an agent for the CIA is exposed.

That's where he first met a 22-year-old graduate of Penn State University named Valerie. Marcinkowski says he knew her simply as Val P., since recruits went by the initial of their last name. And he says she was a natural.

"Did all of you have firearms training?" Bradley asked. "Yes," he replied.

Marcinkowski says she was good. "Some people had never fired weapons before, and some of us had. And it's always interesting when someone that has never fired a weapon kind of beats everybody else that did."

He says the three dozen members of his CIA class were a close-knit group that continued to see each other at class reunions.

Two years ago, when columnist Robert Novak put the name "Valerie Plame" into the public debate over the war in Iraq, Marcinkowski says it took him a few weeks to determine that it was "Val P." who had been compromised. "I found that particularly outrageous. It became very personal."

Marcinkowski was so angry, he went public, something former CIA agents rarely do, blaming the White House, even though nobody has been charged with the actual leak.

"We kept that trust in protecting her identity. So we held a particular trust for 18 years and never gave each other up. And when the White House did that, it was particularly outrageous, because if I have to keep those secrets, they should be held to that same kind of standard," he explains.

As the investigation into who leaked her name got underway in Washington, more details about Valerie Plame's life emerged. She spent her early years in the CIA in Europe, where she received advanced degrees from the London School of Economics and the College of Europe, in Bruges, Belgium.

In recent years, she told people she worked at an energy consulting firm called "Brewster-Jennings & Associates."

Robert Novak, the columnist who first printed her name, revealed that, too. "And she listed herself as an employee of Brewster-Jennings & Associates. There is no such firm, I'm convinced," Novak said on CNN.

He was right. Even though the business directory Dun & Bradstreet had a listing for the firm in a Boston office building, Brewster-Jennings & Associates was a CIA fiction, created to provide cover for agents like Valerie Plame.

Valerie Plame was also exposed as a "NOC," an agent working under non-official cover. That means she wasn't attached to a U.S. Embassy or any other government agency when she worked overseas, which would have provided her protection if she was caught spying. In other words, she had no diplomatic immunity.

Working overseas as an NOC, without official cover, was a dangerous assignment, says Marcinkowski. "With diplomatic immunity, the worst that can happen is you get kicked out of the country. You don't have that kind of a protection when you're a NOC. You're out there, what they would call naked."

"Out there" like Hugh Redmond, a NOC who was caught spying in Shanghai in 1951 and died after 19 years in a Chinese prison. To this day, the CIA denies he was an agent.

"We give our most sensitive cases to those officers serving under non-official cover," explains Melissa Mahle, who spent 14 years in the Middle East as a covert CIA operative maintaining a series of fictitious "legends," or cover stories, created by her superiors.

She left the agency three years ago, and recently struck up a friendship with a woman whose career ran parallel to her own: Valerie Plame Wilson.

"People have said, 'Oh, well, Valerie wasn't serving in a sensitive position. So it's not really that serious.' Well, I would say that's a very fallacious way of looking at this because a cover is for a clandestine officer can be different things at different times. We change cover. We modify cover based on how we need it," says Mahle. "If you start to unravel one part of that, you can unravel the whole thing."

Mahle says Valerie was working on important national security issues, like keeping tabs on nuclear material and the world's top nuclear scientists. "She is an expert on weapons of mass destruction. These are the kind of people that don't grow on trees."

What do agents in that division do? "They're trying to figure out, really, the hard questions of who has the capability obtaining and deploying a biological weapon. Or a chemical weapon. Who's doing it? What are those networks? What are the financial trails?" says Mahle.

The CIA has yet to conduct a formal damage assessment. The agency wanted to wait until the investigation by the special prosecutor was over.

But agency representatives have come to Capitol Hill to brief the intelligence committees about steps they've taken to "mitigate the effects of the leak."

"I think any time the identity of a covert agent is released, there is some damage. And it's serious," says Congressman Rush Holt, a Democrat from New Jersey and a member of the House Intelligence Committee.

Rep. Holt says some people Valerie Wilson came into contact with overseas, even those who didn't know she was a covert operative, could be in danger.

"Have you had assurances that the agency is handling the fallout from this leak?" Bradley asked.

"They have taken the usual procedures to protect the damage from spreading," Rep. Holt replied.

"Is it possible that someone overseas, someone is going to jail because of this?" Bradley asked Holt. "Sure, it's possible."

"Is it possible that somebody lost their life?" Bradley asked. "It's possible. I don't know," the congressman said.

Rep. Holt pointed out there has not yet been a formal assessment. "If there were, and I had been briefed on it, I couldn't talk about it."

"This was a crime against the national security of the country," says Joseph Wilson, Valerie Wilson's husband. He's a career diplomat who served in Iraq for the first President Bush, and on the National Security Council as an expert on Africa for President Clinton.

In February, 2002, he was sent by the CIA to investigate claims that Iraq was trying to buy uranium ore from Niger, a country in Africa where he had once been posted. When he returned, he told the agency such a sale was "highly unlikely."

But when the president said in his January 2003 State of the Union Address that Iraq was seeking uranium from Africa, Wilson accused the administration of lying to make a better case for war. And that, he says, is why people in the administration came after his wife.

Bradley sat down with Wilson when Special Prosecutor Patrick Fitzgerald announced the results of his two-year investigation, not charging the vice president's Chief of Staff Lewis Libby with leaking the name, but with lying and obstructing justice.

"Do you think that the prosecutor has gotten to or is getting to the bottom of it?" Bradley asked.

"I don't know. It's hard for me to say. This was done to silence others. This was a shot across the bow to others. The message was if you do to us what Wilson did to us, we'll do to you what we just did to Wilson's family," said Wilson.

And the damage to Valerie Plame Wilson was serious, as spelled out by the special prosecutor. "Valerie Wilson's friends, neighbors, college classmates had no idea she had another life," Fitzgerald said.

When they first met, Wilson says Plame told him she was a risk analyst for an international firm.

"But, once you were married, you had to join this cover. I mean, you couldn't tell your family, your friends," Bradley asked.

"So, no one said, 'I sort of suspected this all the time?'" Bradley asked.

Wilson says that did not surprise him at all. "As Valerie points out, most people are interested in talking about themselves and, therefore, it was very easy for a professional to shift the conversation away from her and onto other people."

When she saw Novak's column, he says, it came as a complete shock. Eighteen years of a meticulously-crafted cover, exposed in an instant.

"She felt like she had been hit in the stomach. It took her breath away. She recovered quickly because, of course, you don't do what she did for a living without understanding stress. And she became very matter of fact right afterwards. And started making lists of what she had to do to ensure that her assets, her projects, her programs and her operations were protected," Wilson said.

"Did she realize then that her career as an undercover agent for the CIA was over?" Bradley asked.

"Absolutely. Sure. There was no doubt about it in her mind. And she wondered for what," Wilson said.

"Novak also published the name of the front company that your wife used for cover, Brewster-Jennings & Associates. How would you characterize that disclosure?" Bradley asked.

"I think it was abominable. But when he published her name, it was very easy to unravel everything about her, her entire cover. You live your cover. And so you live Brewster-Jennings. So, she would have had business cards that said Brewster-Jennings on them. So, that was just insult to injury. And it was just Mr. Novak taking a second bite of the apple," says Wilson.

Wilson confirmed that as a CIA agent, his wife was working to uncover information about weapons of mass destruction. Since she is still an agency employee, Valerie Wilson has been silent. Despite the fact it has been two years since she was exposed, the CIA still won't comment on the record about the damage.

"Did your wife ask for protection from the agency?" Bradley asked.

"I don't go into security matters. But, you can be sure that we discussed security at great length with various agencies," Wilson said.

"I get the impression you get really angry about what happened," Bradley asked Melissa Mahle.

Valerie Wilson still reports to work every day at CIA headquarters in Langley, Va. Friends say her status as America's most famous spy makes it impossible for her to remain in the clandestine service of the CIA, a place where she's spent her entire working life.

"Have you been in contact with her recently?" Bradley asked Marcinkowski. "Yes," he replied.

"What has this done to her? How's she handling it?" Bradley asked.

"Well, first of all, CIA people don't like cameras. We don't like publicity. We operate in the background as much as possible. So she's in a very, very uncomfortable spot," Marcinkowski replied.

"So her career is then definitely been damaged by this?" Bradley asked.

"Her career has been ended," he said.