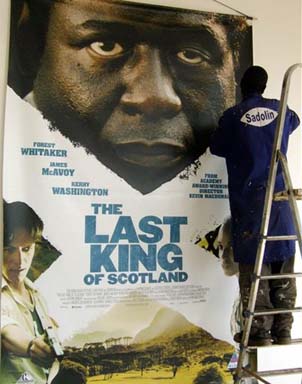 Since 1982, a record 233 executions have been carried out in the Texas death chamber. For many, that doesn't mean much because they view the death penalty from such a distance. Dan Rather gives a close-up report for 60 Minutes II on the state-sanctioned death of convicted killer Ricky McGinn.

Frances McGinn, a Pentecostal minister and a mother of nine, decides to be with her son Ricky McGinn on the day of his execution.

"I will be there with my son," she says. "I have said this,...'Ricky, I brought you into this world and I will be with you when you go out of this world.' Is it going to be easy?...No. It will be taking a part of my life when he takes his last breath. But I have to be there with him. I just have to be. He's my son. I love him."

Janet Roberts, mother of Stephanie Flanary, loves her child, too. McGinn was convicted of raping and killing 12-year-old Stephanie in 1993.

Roberts travels to Huntsville, Texas, to watch her daughter's killer die. "I'm not afraid but I'm not excited," Roberts says. "What that man did to my daughter, he deserves a lot worse than what he's getting. He lays down and goes to sleep."

"My daughter was hit in the back of the head three times with an axe until her eye was knocked out of the socket," she continues. "That's hurting. He's not going to hurt. He's going to lay down on a bed, they're going to put a needle in his arm and he's going to go to sleep.That's awful simple."

It is not simple for Roberts, though. The man arrested for raping and killing her daughter is also her husband and Stephanie's stepfather.

Rather talked to McGinn in an exclusive interview before his death. "I'm ready to die," McGinn says. "Death doesn't scare me."

McGinn has always denied the murder of his stepdaughter "I didn't rape and murder nobody, especially my own little 12-year-old girl," McGinn says.

The execution had been set for June 1 but with only minutes left to live, he won a rare delay so that DNA testing could take place. As it turned out, the lab results were as tough on McGinn as the jury was. The test supported the guilty verdict.

Several hours before her son's execution, Frances McGinn and her family arrive at Hospitality House, a Southern Baptist charity just a few blocks from the death chamber, to begin a difficult afternoon of praying and waiting.

Bob and Nelda Norris have run Hospitality House for 12 years. "In the execution itself, the one that suffers the most is the mother. And people never think about this fellow having a mother that raised him," Bob Norris says.

Posted on a bulletin board at the house are the faces of 140 inmates put to death in Huntsville, reminders of the families that came there or help on execution day. "We've sat in this living room and heard the bitter wail of a mother whose son has just been executed. And if you hear it, you'll never forget it," says Nelda Norris.

Janet Roberts and her daughter Denise also wait - for what they see as justice. "This whole seven years, four months and five days. We've waited and waited and waited. It's finally going come to an end," Denise says.

They file into a hotel conference room, where Dan Guerra, the director of State Victim Services, briefs them on the execution. "This hopefully is going to be a pretty routine type execution," Guerra says to the victim's family.

A few miles away at Hospitality House, chaplain Jim Brazzil has been assigned to attend to the family of the inmate. "In essence, on the day of the execution, they are at the same spot that the other family was on the day of the crime," he says.

Condemned inmates in Texas spend their last day with Brazzil at their side. Brazzil estimates that he has spent the final moments with more than 130 condemned inmates. Many of the inmates he ministers to are guilty he believes.

He admits, though, that sometimes he thinks the person only moments from death may be innocent, but by that time it's out of his hands. "I can't see what I could do about it," Brazzil says. "I mean, he's already dead at that point."

Brazzil talks the inmate's family through the likely turn of events of the execution: "A little bit after 6, Warden Willett will come back into the chamber where we are, and he'll say, 'Ricky, it's time.' They will open the cell door, and he will walk unchained, unshackled into the death chamber."

The victim's family experiences a similar breakdown of the events to come. "What could happen is he could die with his mouth and eyes open...because it actually shocks them," Guerra explains to Janet Roberts, her daughter and others. "They'll realize at the very end, that they're dying, and they have this wide expression so that's a possibility of what you might see."

In the room where the victim's family gathers, there is disappointment that McGinn won't suffer; at Hospitality House there is dread that he might.

The press gathers outside the prison as Ricky McGinn's final hour approaches. From his cell - a few feet from where he was to die - McGinn calls his mother one last time.

"And you be strong and remember what I told you. OK?" Frances McGinn tells her son. "When that needle goes in your arm, you just cry out to Jesus. You just say, 'Jesus, Jesus,' and when you wake up, he'll be right there with you."

The families are led into the prison to the death chamber as protestors - for and against - rail at each other outside the prison walls.

The victim's family stays inside to meet with counselors. The inmate's family is shown the execution - and shown the door.

Janet Roberts exits the execution blowing kisses and claiming victory. "I want to thank everybody for being here," Roberts says to the crowd of reporters and protestors outside. "I think I can go home and sleep really good tonight. There is actually some peace here. Thank you all," she says.

Brazzil has a different perspective: "When I walk out of the death chamber, I see that...both sides walk away still hurting. Nobody has won. Everybody has lost. Everybody is still a victim. And I look, and I realize that the significance of life and death is not weighed in the balances on that gurney in there, but in people's hearts."

The crowd outside the death chamber clears; at Hospitality House the owners start getting ready for next time.