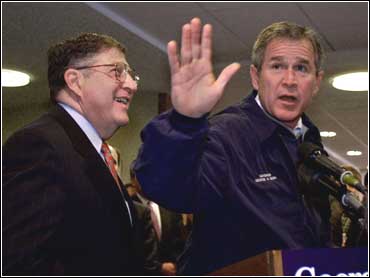 Time's running out in New Hampshire and the candidates are scrambling for any advantage they can muster. If their own luster isn't enough, they're happy to bask in someone else's.

Bill Bradley, struggling for a toehold, campaigned Friday with Lowell Weicker, the former U.S. senator and governor of Connecticut. In the last week, Bradley has brought senators Paul Wellstone and Bob Kerrey to events as well.

But are endorsements really useful? "They probably have a minor value," says CBS News Senior Political Editor Dotty Lynch. "It's a way to get a little flashiness in the news story. It's a little less dry than another tax speech." But it's doubtful, even in New Hampshire, that a nod from Sununu will sway many voters.

For Bush, who endorses him is less important than the endorsement itself. As Lynch notes, "he wants to send a message that the top Republicans in New Hampshire are coming together behind him." Republican leaders, moderate and conservative, have rallied behind Bush not necessarily because they love his policies, but because they believe he can win. They're willing to subsume their own agendas just to get the GOP back in the White House.

"It's important that the Republican Party have the best candidate running for president," Sununu intoned Friday morning. "If it (a Bush win) could happen in New Hampshire without my endorsement, maybe I would be quiet, but I hope to contribute to the momentum the governor now has." Notice the heartfelt enthusiasm behind that statement.

The same attitude lies behind Jack Kemp's endorsement of Bush. Kemp backed Steve Forbes in 1996, and supported Dan Quayle last year, before Quayle dropped out. Clearly he's not entranced with Bush, yet he's offering him his support.

Forbes, meanwhile, is smarting. He declared that Kemp "is part of the party establishment. So it is no surprise that they are rallying around their own. It shows that we are mounting a real challenge to them." But Forbes knows as well as the rest of us that losing a key endorsement "perpetuates that loser image," as Lynch put it.

Among the Democrats, there's a stampede towards Gore. He's got the blessing of much of the party leadership; so much so that he doesn't need to parade his endorsements at campaign events. There are occasional exceptions, as when he trotted about for a day with Senator Ted Kennedy, "Mr. Healthcare," in a bid to win the healthcare argument with Bradley.

It's Bradley who has to make the most of his endorsers, letting them take on the useful role of campaign surrogates. Until a few days ago, Bradley wouldn't criticize Gore; he lft that to Senator Kerrey. Bradley's on the offensive now, but it's still nice to have someone else say, as Lowell Weicker did Friday, that Gore was kowtowing to the religious right back in the 1980s when he voted against federal funding for abortion.

"This is a tremendous boost to the campaign," Bradley beamed after Weicker finished his attack on Gore. That's because Weicker's an independent, and seen as prime bait for New Hampshire's many independent voters. Senator John McCain is competing for those voters as well, but Bradley has never whispered a word against the Arizona Republican. That, too, was left to Weicker. "Do not confuse independence with the Republican party," he said. "That is not a quality inherent in this group." After you get past campaign finance reform, Weicker said, "the only independent thinker and actor here is Bill Bradley."

In the days to come, look for more endorsements, more faces and more handshakes. They may not turn the tide for a candidate, but they vindicate and gratify him, even if only for a moment.