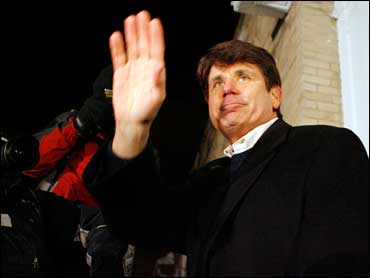 "The ordeal is over."

After weeks of shocking twists and turns, the conclusion of Blagojevich's tenure as Illinois governor offered little surprise.

Accused of trying to sell Barack Obama's vacant Senate seat, Blagojevich becomes the first U.S. governor in more than 20 years to be removed by impeachment.

Once the State House impeached him earlier this month for abuse of power, the Senate did what was expected and voted to throw Blagojevich out of office. And on an identical 59-0 roll call, it barred the two-term Democrat from ever again holding public office in the state.

"He failed the test of character. He is beneath the dignity of the state of Illinois. He is no longer worthy to be our governor," said Sen. Matt Murphy, a Republican from suburban Chicago.

The state's Democratic Lieutenant Governor (and one of Blagojevich's strongest critics), 60-year-old Quinn, was promptly sworn in as governor.

Blagojevich, 52, had boycotted the first three days of the impeachment trial, calling the proceedings a kangaroo court. But on Thursday, he went before the Senate to fight for his job, delivering a 47-minute plea that was, by turns, defiant, humble and sentimental.

He offered familiar lines: He was innocent. The trial rules were unfair. His goal always was to help people.

"You haven't proved a crime, and you can't because it didn't happen," Blagojevich told lawmakers. "How can you throw a governor out of office with insufficient and incomplete evidence?"

"I think what's been very disappointing and very frustrating to everyone involved in the process … is that the governor could have brought forward information and evidence and witnesses, and he refused at every turn to do so," Illinois State Attorney General Lisa Madigan said on CBS' The Early Show. "He didn't participate when the House was considering impeachment. He obviously refused to participate in the actual trial in front of the Senate.

"But he did come to make a closing statement where he wasn't under oath, and therefore said a whole series of things that ultimately were taken as incredible, as well as potentially going to be used against him in his ultimate criminal trial."

In a solemn scene, more than 30 lawmakers rose one by one on the Senate floor to accuse Blagojevich of abusing his office and embarrassing the state. They denounced him as a hypocrite, saying he cynically tried to enrich himself and then posed as the brave protector of the poor and "wrapped himself in the constitution."

(CBS)
"I think this is a new beginning for our state and one that is absolutely necessary in the aftermath of a very destructive tenure of the governor," Madigan (left) told Early Show anchor Maggie Rodriguez. "And so it is actually a good day. Certainly difficult times ahead and challenges, but we are going to move forward."

Blagojevich did not stick around to hear the vote. He took a state plane back to Chicago.

He did, however, use his last day in office to grant clemency to a prominent Chicago real estate developer and a former drug dealer, just hours before the vote to oust him.

However, his troubles are not over; Federal prosecutors are drawing up an indictment against him on corruption charges.

The new governor also canceled the former governor's security detail, which ended when Blagojevich arrived home from the state Capitol.

Outside his Chicago home Thursday night, Blagojevich vowed to "keep fighting to clear my name," and added: "Give me a chance to show you that I haven't let you down."

Madigan was asked by Rodriguez if Blagojevich's actions up to and after the trial were delusional or signs that he was in denial about what was happening to him.

"I think a lot of people have speculated," Madigan said. "Certainly you've heard what our mayor has had to say, that there's something the matter with the governor." [Chicago's Richard Daley had called Blagojevich "Coo-coo."] "You know, it's incomprehensible to me as a lawyer why you would conduct yourself in the manner that he has. If you were really serious about being innocent and if you believed that you can prove that you are not guilty, then use the forum that's presented to you - work within the law.

"Instead he chose to fly off to New York and be on every possible TV talk show that was available to him and really never directly answered the questions that were posed to him, even on those talk shows, but [which] obviously were being dealt with by our State Senate. So obviously it appears that there must be some sort of a problem.

"At a bare minimum, he seems quite comfortable in mispresenting the truth."

"Do you think this will end with the governor being convicted and going to jail?" Rodriguez asked.

"We Have This Thing Called Impeachment And It's Bleeping Golden"

The verdict brought to an end what one lawmaker branded "the freak show" in Illinois. Over the past few weeks, Blagojevich found himself isolated, with almost the entire political establishment lined up against him. The crisis paralyzed state government and made Blagojevich a punchline from coast to coast.

Many ordinary Illinoisans were glad to see him go.

"It's very embarrassing. I think it's a shame that with our city and Illinois, everybody thinks we're all corrupt," Gene Ciepierski, 54, said after watching the trial's conclusion on a TV at Chicago's Billy Goat Tavern. "To think he would do something like that, it hurts more than anything."

The verdict capped a head-spinning string of developments that began with the governor's arrest by the FBI on Dec. 9. Federal prosecutors had been investigating Blagojevich's administration for years, and some of his closest cronies already have been convicted.

The most spectacular allegation was that Blagojevich had been caught on wiretaps scheming to sell an appointment to Mr. Obama's Senate seat for campaign cash or a plum job for himself or his wife.

"I've got this thing and it's (expletive) golden, and I'm just not giving it up for (expletive) nothing. I'm not gonna do it," he was quoted as saying on a government wiretap.

Sen. James Meeks, a Chicago Democrat, mocked Blagojevich during debate: "We have this thing called impeachment and it's bleeping golden and we've used it the right way."

Prosecutors also said Blagojevich illegally pressured people to make campaign contributions and tried to get editorial writers fired from the Chicago Tribune for badmouthing him in print.

Mr. Obama himself, fresh from his historic election victory, was forced to look into the matter and issued a report concluding that no one in his inner circle had done anything wrong.

"Today ends a painful episode for Illinois," the president said in a Thursday night statement. "For months, the state had been crippled by a crisis of leadership. Now that cloud has lifted."

Even as lawmakers were deciding whether to launch an impeachment, Blagojevich defied the political establishment by appointing a former Illinois attorney general, Roland Burris, to the very Senate seat he had been accused of trying to sell. Top Democrats on Capitol Hill eventually backed down and seated Burris.

As his trial got under way, Blagojevich launched a national media blitz, rushing from one TV studio to another in New York to proclaim his innocence. He likened himself to the hero of a Frank Capra movie and to a cowboy in the hands of a Wild West lynch mob.

The impeachment case included not only the criminal charges against Blagojevich, but allegations he broke the law when it came to hiring state workers, expanded a health care program without legislative approval and spent $2.6 million on flu vaccine that went to waste. The 118-member House twice voted to impeach him, both times with only one "no" vote.

Seven other U.S. governors have been removed by impeachment, the most recent being Arizona's Evan Mecham in 1988. Illinois never before impeached a governor, despite its long and rich history of graft.

By Thursday night, Blagojevich's name and picture had disappeared from the state's official Web site. Instead, an unobtrusive "Pat Quinn, Governor" was in the upper right corner.

CBS Station WBBM also reports that signs on the Illinois Tollway system touting open-road tolling will be replaced. The signs, which prominently feature the name of Blagojevich (who had pushed for the open-road tolling system) were erected in 2004 at a cost of $480,000.

Blagojevich also won't be able to collect state unemployment benefits because he was fired for misconduct. Blagojevich will also lose his governor's pension if he's convicted in federal court.

In addition, Federal prosecutors could try to seize the multi-million dollar Blagojevich campaign fund. If they do, he won't be able to use those funds to pay for his legal defense.

Meeting these financial burdens will be difficult given Blagojevich's limited options. Cindy Canary of the Illinois Campaign for Political Reform told Parker, "He's tarnished goods. He is in a bad spot."