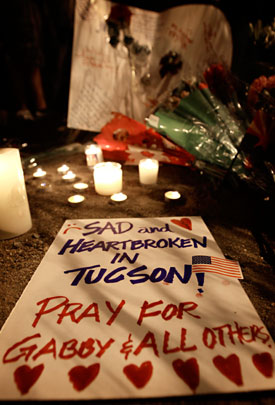 Savage America has reared its head again, with another shooting rampage, this time targeting a U.S. representative and leaving at least six individuals dead and a dozen wounded.

This attack on Rep. Gabrielle Giffords and 18 other human beings by a 22-year-old with a Glock 19 9mm semi-automatic pistol was called "a tragedy for Arizona and a tragedy for our entire country" by President Obama.

His sentiments were echoed across the political spectrum, making the terrible tragedy one of few things the two parties have easily agreed upon in recent memory.

Perhaps this incident will bring about some "soul searching," as Pima County Sheriff Clarence Dupnik suggested in his remarks before the press.

Sheriff Clarence Dupnik pointed to "vitriolic rhetoric that we see and what we see on TV and how our youngsters are being raised" contributing to a United States of America that is no longer "nice."

"That may be free speech but it's not without consequences," he said.

Giffords' fellow  Arizona Democrat, Rep. Raul Grijalva told MotherJones, "We're feeding anger, hatred, and division for quite a while. Maybe it is time for elected officials and leaders in this country that have been feeding that disease to realize that there are consequences to it."

During the midterm election campaign, Sarah Palin placed Giffords in the "crosshairs" of a "target list" of lawmakers she wanted to see beaten.

Giffords responded on MSNBC to Palin's "crosshairs" targeting, stating, "The way that she has it depicted has the crosshairs of a gun sight over our district, when people do that, they have got to realize there are consequences to that," she added.

At this point, we don't know much about the suspected shooter, Jared Loughner, or an alleged second suspect. It's unclear whether Loughner's act was influenced by a toxic overdose of vitriolic political discourse, or to what degree the verbal war of politics fed his apparent "anger" and "hatred" and placed Giffords in his crosshairs.

In a YouTube video, which features text listed as his "final thoughts," Loughner urges people to "read the United States of America's Constitution to apprehend all of the current treasonous laws."

"I can't trust the current government because of the ratifications: The government is implying mind control and brainwash on the people by controlling grammar," he wrote.

His alleged writings make him out to be a mentally disturbed outlier, not a rogue Tea Partier, who fired point-blank at the Arizona Democrat's head.

Perhaps this gross and mad act of violence, which took the life of a 9-year-old girl, a judge and others who had productive lives to lead, will shock politicians and partisan pundits into higher degree of civility, or at minimum tone down some of the divisive, corrosive rhetoric.

Presidential aspirant Sarah Palin, famous for her trademark, gun-blazing "Don't retreat, reload" phrase and crosshairs, will have to retool her rhetoric if she plans to switch from her Fox News political punditry perch to elective politics.