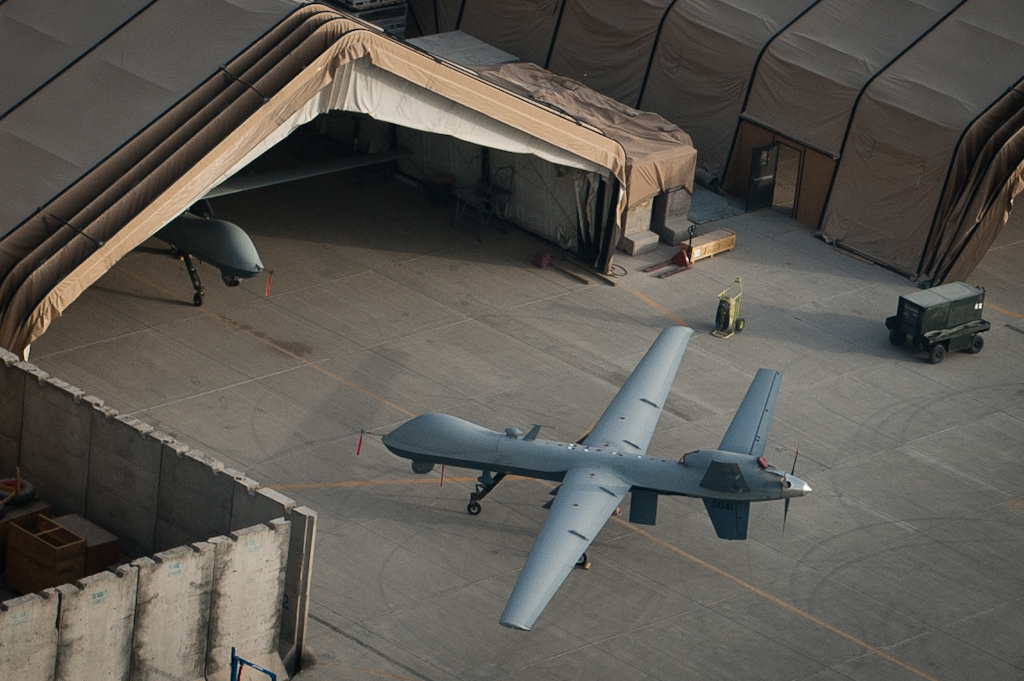 GlobalPost looks at the rise of the drones, which the U.S. has used increasingly over the last few years against terrorist targets. Remotely operated, armed drones have been responsible for the elimination of many of the most wanted terrorists in Afghanistan, Yemen and Pakistan. However, questions of legality, civilian deaths and the development of lethal drones in China and other countries is creating controversy around the "Drone War."  This article was written by Peter Gelling.

The Drone Wars are the new black.

The once covert, highly-secretive and little talked about strategy of using unmanned aerial vehicles to target suspected terrorists in Pakistan and elsewhere has gone mainstream. And now everyone is talking about it.

Even Leon Panetta, the former C.I.A. director, whose old agency doesn't officially admit that its drone program exists, is talking about it. Twice in a matter of hours last week he joked about the C.I.A.'s pension for deploying the ominously-named Predator drones.

"Obviously I have a hell of a lot more weapons available to me here than I had at the C.I.A.," he said, referring to his new post as secretary of defense. "Although the Predators aren't bad."

Later that same day, on the tarmac of a naval air base, he said, coyly, that the use of Predators are "something I was very familiar with in my old job." Soon after, a Predator armed with Hellfire missiles took flight from the runway, bound for Libya.

It might have been a joke, but he wasn't joking -- Panetta oversaw a dramatic increase in the use of drones during his tenure as C.I.A. director. And its a trend that has continued. Drones are now operated by the C.I.A. and the U.S. military in Afghanistan, Pakistan, Iraq, Yemen, Libya and Somalia.

The Predator and Reaper drones are armed with both missiles and high-powered cameras, allowing a "pilot," based tens of thousands of miles away, to analyze in detail his target, without ever having to go into battle himself.

They have become the favorite weapon of the administration of U.S. President Barack Obama. The U.S. government now operates two drone programs, to varying degrees of transparency, accountability and success. One is directed by the U.S. military, which is publicly acknowledged and operates in declared war zones, like Iraq, Afghanistan and Libya. The military also operates drones in undeclared war zones in Somalia and Yemen. The other is directed by the C.I.A. and is not publicly acknowledged, operating primarily in Pakistan, although it has recently stepped up operations in Yemen as well. It was a C.I.A.-operated drone that killed U.S.-born Yemeni cleric, and Al Qaeda promoter, Anwar al-Awlaki last month.

Although the first strike by an armed drone took place in Pakistan in 2004 under then-president George W. Bush, it's Obama who fully embraced the technology. Under Obama's watch, in fact, the number of drone strikes has increased exponentially.

The Drone Wars: Is it legal?

The U.S. government doesn't make public its own accounting of how many attacks have taken place, or how many people have been killed in those attacks. But in an analysis of press reports by GlobalPost, which is an estimate at best, there were more than 30 strikes on Pakistan during Obama's first year in office, up from a total of about 13 strikes in all the years between 2004 and 2007.

And the numbers continue to inflate from there. In 2009, there were about 54 attacks, all also in Pakistan. In 2010, the war expanded to include Yemen, and there were a total of 122 strikes. So far this year, there have been 81 strikes in Pakistan, Somalia and Yemen combined.

That doesn't include Afghanistan, Iraq or Libya, where the drones are being used in a declared conflict.

The rationale, U.S. officials say, is simple. The drones allow the United States to seek out its disparate enemies in parts of the world where its soldiers, and the soldiers of the host country, are unable or unwilling to reach. Pakistan's tribal areas, a haven for Al Qaeda and Taliban militants, are only nominally under the control of the Pakistani government and its own military is hardly able to operate there, let alone the U.S. military.

The same goes for parts of Yemen and Somalia.

The drones can also hit very specific targets, minimizing civilian casualties. A U.S. official familiar with the government's counter-terrorism operations said that compared to the way the United States and others waged war in World War II or Vietnam, the drones are a major improvement. The official noted that the technology allows the military, or the C.I.A., to examine a single house for days, to be sure of its target and to destroy the house without damaging anything around it.

Few would deny that targeted drones are preferable to carpet bombing, but their accuracy is reliant on accurate intelligence. And more than once the United States has gotten it wrong -- perhaps most tragically on Oct. 30, 2006, when an errant drone strike obliterated an Islamic boarding school in Chenagai, Pakistan, killing 82 people.

There was also the the killing in Yemen in 2010 of Jabr Al-Shabwani, a popular deputy governor, also by an errant drone strike.

Despite official claims that using real-time imaging allows operators of drones to know in detail both before and after an attack who, and how many, they have killed, the U.S. government has at times gotten it wrong.

The Drone Wars: The humans behind the technology

U.S. and Pakistani officials announced on June 3, for instance, that Ilyas Kashmiri, Al Qaeda's operational commander in Pakistan, had been killed in a drone strike. Six others were killed in the same attack. It was the second time Kashimri was reported to be killed. He was also pronounced dead in a similar attack in 2009. Mohammad Omar, the leader of the Taliban, was also twice reported killed in a drone strike. And the list goes on.

Such confusion has led to speculation that more civilians are being killed in the strikes than is being reported by the United States. The Bureau of Investigative Journalism, a nonprofit organization based in London, has attempted an accounting of all the civilians killed in Pakistan since the covert drone war began in 2004. Based on press accounts and local sources, the Bureau estimates that between 385 and 775 civilians have so far been killed in Pakistan alone, many of them children.

The killing of civilians and the disruption of life in regions targeted by drones has given rise to concerns that the strikes are driving a whole new generation of people, frustrated by the U.S. incursion on their lives, to the side of the militants. Indeed, some disturbing strategies are being used by the C.I.A. in Pakistan, including the targeting of funerals being held just hours after an initial attack. Large protests against the U.S. drone war in Pakistan, Somalia and Yemen have become a regular occurrence.

Still, the governments of all three countries have tacitly allowed the United States to continue the program, and the drones have met with success -- a number of senior Al Qaeda and Taliban militants have been killed by drones, and they have become one of the most successful weapons in the war on terror.

If it's a good policy to eliminate Al Qaeda, the U.S. official said, then you have to look at the best way to do that. And the drones are just one tool in the toolbox.

How many drones does it take to kill a terrorist?

Are drones making war too easy?