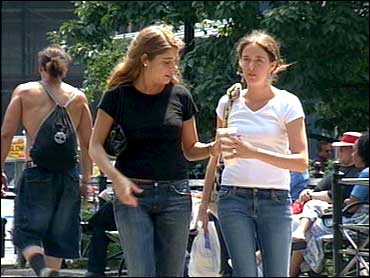 If you've ever wondered why corporate America, Hollywood, Madison Avenue and the media all seem obsessed with the youth culture, the answer is simple.

The largest generation of young people since the '60s is beginning to come of age. They're called "echo boomers" because they're the genetic offspring and demographic echo of their parents, the baby boomers.

Born between 1982 and 1995, there are nearly 80 million of them, and they're already having a huge impact on entire segments of the economy. And as the population ages, they will be become the next dominant generation of Americans.

Who are they? What do they want? As Correspondent Steve Kroft first reported last October, you'll be surprised.

The oldest are barely out of college, and the youngest are still in grade school.

And whether you call them "echo boomers," "Generation Y" or "millennials," they already make up nearly a third of the U.S. population, and already spend $170 billion a year of their own and their parents' money.

Almost none of it is spent on boring things like mortgages and medication, and the world is falling all over itself trying to sell them things.

What brands do they love? Sony, Patagonia, Gap, Gillette, Aveda.

Only a small percentage are eligible to vote, yet they are already one of the must studied generations in history -- by sociologists, demographers and marketing consultants like Jane Buckingham of the Intelligence Group.

Echo boomers are a reflection of the sweeping changes in American life over the past 20 years. They are the first to grow up with computers at home, in a 500-channel TV universe. They are multi-taskers with cell phones, music downloads, and Instant Messaging on the Internet. They are totally plugged- in citizens of a worldwide community.

Nick Summers of Columbia University and Andie Gissing from Middlebury College in Vermont are college seniors and editors of their college newspapers. They are both in touch with the echo boomer ethos.

(Note: Since 60 Minutes first broadcast this story, these college editors have become college graduates, and Neil Howe and colleague William Strauss have completed another study of the echo boom generation, "Millennials and the Pop Culture," to be published this fall.)

"I would say that my generation tends to be very overachieving, over-managed," says Summers. "Very pressured."

"I would agree with that," adds Gissing. "A lot of people work hard or want to do well, I guess."

And it's no wonder they feel that way. From when they were toddlers, they have been belted into car seats, and driven off to some form of organized group activity. After graduating from "Gymboree" and "Mommy and Me," they have been shuttled to play dates and soccer practice, with barely a day off, by parents who've felt their kids needed structure, and a sense of mission.

Dr. Mel Levine, a professor at the University of North Carolina, is one of the best-known pediatricians in the country. He says it's had as much to do with shaping this generation as technology.

"They have been heavily programmed. The kids who have had soccer Monday, Kung Fu Tuesday, religious classes Wednesday, clarinet lessons Thursday. Whose whole lives have really been based on what some adult tells them to do," says Levine.

"This is a generation that has long aimed to please. They've wanted to please their parents, their friends, their teachers, their college admissions officers."

It's a generation in which rules seem to have replaced rebellion, convention is winning out over individualism, and values are very traditional.

They are also the most diverse generation ever: 35 percent are non-white, and the most tolerant, believing everyone should be part of the community.Historian Neil Howe, along with co-author William Strauss, has made a career studying different generations. Howe says all the research on echo boomers always reflects the same thing: They are much different than their self-absorbed, egocentric baby boomer parents.

"Nothing could be more anti-boom than being a good team player, right? Fitting in. Worrying less about leadership than follower-ship," says Howe. "If you go into a public school today, teamwork is stressed everywhere. Team teaching, team grading, collaborative sports, community service, service learning, student juries. I mean, the list goes on and on."

Howe thinks they are more like their grandparents, the great World War II generation -- more interested in building things up than tearing them down.

"When you ask kids, 'What do you most hope to achieve there?' Where they used to say, 'I wanna be No. 1. I wanna be the best,' increasingly they're saying, 'I wanna be an effective member of the team. I wanna do everything that's required of me,'" says Howe.

And you can already see some results. Violent crime among teenagers is down 60 to 70 percent. The use of tobacco and alcohol are at all-time lows. So is teen pregnancy. Five out of 10 echo boomers say they trust the government, and virtually all of them trust mom and dad.

Through sheer numbers, they're beginning to change society. They have affected school construction, college enrollments, product development, and media content. And according to Buckingham, they are changing the way things are sold, from clothing to cars, because mass marketing doesn't always reach them.

They are the most sophisticated generation ever when it comes to media. They create their own Web sites, make their own CDs and DVDs, and are cynical of packaged messages. They take their cues from each other. A well-placed product on one of their pop idols, like Paris Hilton or Ashton Kutcher, can launch a brand of $40 T-shirts and trucker hats. But they also shop at vintage clothing shops.

Buckingham employs the services of some 1,500 young people scattered around the country, and relies on their regular reports on what's hot and what's not to keep her and her clients ahead of the latest trends.

"One of the things with this generation is word of mouth. Buzz is more important today than it's ever been," says Buckingham. "And that can get started on the Internet. That can get started just through friends. And it's very hard for a marketer to tap into that unless it's really a product that they like."

Toyota is already betting hundreds of millions of dollars to try to create that buzz, in launching a car division aimed exclusively at echo boomers.

Toyota is quietly peddling its new $15,000 cars, with air conditioning and power windows, by sponsoring events like street basketball/break dance festivals, where they always have cars on hand for people to look at and sometimes even test drive.

"People kind of just stumble on our product, and it's cool that way," says Farley. That's what the company wants. "This is like regular car companies are on TV. This is our regular activity. This is how we expose our cars to young people."

Seventy percent of Scion's promotion is being spent on those events. Only 30 percent is spent on traditional advertising, and much of that is on the Internet, where echo boomers can fill out a Scion order form, customize their car with 40 different options, and drop off the form at the dealership without ever hearing a sales pitch.

It's early yet, but Farley says Scion is meeting its sales projections: "I think how we've looked at it is that we can't afford not to do this."

Echo boomers have their own television network, the WB, and their own stores, with multimedia presentations and disc jockeys to lure them in the door. It's a generation used to being catered to.

"They are more protected," says Howe. "They regard themselves as collectively special, because of the time in which they were raised."

Why do they consider themselves special?

"Because they came along at a time when we started re-valuing kids. During the '60s and '70s, the frontier of reproductive medicine was contraception," says Howe. "During the '80s and beyond, it's been fertility and scouring the world to find orphan kids that we can adopt. ...The culture looked down on kids. Now it wants kids; it celebrates them."

Echo boomers are the most watched-over generation in history. Most have never ridden a bike without a helmet, ridden in a car without a seat belt, or eaten in a cafeteria that serves peanut butter.

"Sometimes, they don't know what to do if they're just left outside and you say, 'Well, just do something by yourself for a while,'" says Howe. "They'll look around stunned. You know, 'What are we supposed to do now?'"

They're hovered over by what college administrators call "helicopter parents." Protected and polished, they are trophy children in every sense of the word.

"Everyone is above average in our generation," says Summers.

"Everybody gets a trophy at the end of the year. It's something you're used to," adds Gissing. "And you have the rows of trophies lined up on your windowsill, or whatever."

"Parents feel as if they're holding onto a piece of Baccarat crystal or something that could somehow shatter at any point," says Levine. "And so parents really have a sense their kids are fragile. And parents therefore are protecting them, inflating their egos. Massaging them, fighting their battles for them."

Levine, who is considered one of the foremost authorities in the country on how children learn, is now researching a book on young people entering their 20s. He is concerned that groupthink is stifling initiative. And because they have always been rewarded for participation, not achievement, they don't have a strong sense what they are good at and what they're not.

For instance, when a young person shows up for work at his or her first job, what do they expect and what are they finding?

"[They expect] that they're gonna be allowed to rise to the top quickly. That they're gonna get all the credit they need for everything they do. And boy, are they naive. Totally naive, in terms of what's really gonna happen."

Levine says that is not the only part of their cultural conditioning that's going to require an adjustment in the workplace.

"I talked to the CEO of a major corporation recently and I said, 'What characterizes your youngest employees nowadays?'" says Levine. "And he said, 'There's one major thing.' He said, 'They can't think long-range. Everything has to be immediate, like a video game. And they have a lot of trouble sort of doing things in a stepwise fashion, delaying gratification. Really reflecting as they go along.' I think that's new."

Levine calls the phenomenon visual motor ecstasy, where any cultural accoutrement that doesn't produce instant satisfaction is boring. As echo boomers grow up, they'll have to learn that life is not just a series of headlines and highlight reels.

But this may be something that, for now, echo boomers can deal with.
"What would you call your generation?" Buckingham asked Scott, one of her focus group participants.

Hungary paying citizens to have babies

Scientists say planet in midst of a sixth mass extinction
Thanks for reading CBS NEWS.
Create your free account or log in
for more features.
View CBS News In
CBS News App Open
Chrome Safari Continue
Be the first to know
Get browser notifications for breaking news, live events, and exclusive reporting.