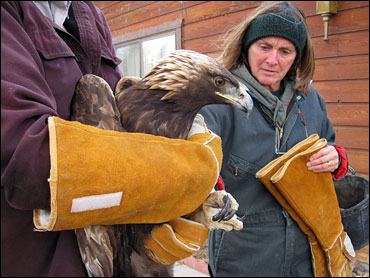 The eagle has landed - with a thud - after crashing through the windshield and into the cab of a tractor trailer traveling a Nevada highway.

State wildlife officials said Wednesday that a 15-pound golden eagle with a 7-foot wing span has a swollen head but otherwise appears unhurt after crashing into a Florida truck driver's big rig Monday.

Matthew Roberto Gonzalez of Opa Locka, Fla., was driving on U.S. Interstate 80 in northeast Nevada near Wells, about 60 miles west of the Utah line, when the eagle came crashing into his truck.

"I heard a loud thump like a brick or something coming through the glass," said Daryl Young of Miami, the co-driver who was dozing in the sleeper berth when it happened.

"I woke up and the windshield was all over me. Next thing I know there was a big bird lying on the floor," he told The Associated Press.

Jeffrey Spires, owner of Spires Trucking of South Florida in Miramar, Fla., said he thought his drivers were kidding when they called to report the damage.

"Never in trucking history," he said about the incident.

Joe Doucette, a spokesman for the Nevada Department of Wildlife, said it appears the eagle hit the windshield head first.

"One side of the head is swollen, but there does not appear to be any permanent damage," Doucette said. He said the truckers found themselves face to face with "one ticked off bird."

"She was pretty feisty," he said. "Even the officer who responded didn't want to go in there so we had one of our wildlife biologists do it."

The eagle was recovering at the Northeast Nevada Wildlife Rehabilitation Center in Spring Creek run by Jo Dean.

"Her left eye has some soft tissue damage around the eye but the eyeball looks OK to me. She doesn't seem to have any other injuries," Dean said.

"She is strong. She is really feisty," said Dean who said the eagle was placed in a flight cage with another eagle because she was just doing too well to be kept in a small cage meant for badly injured birds.

Doucette said the goal is to release the eagle into the wild.

"Right now the prognosis is good," he said.

Wildlife officials said the 3-foot-wide hole in the truck's windshield is an example of why drivers need to slow down if they see an eagle on the side of the road.

"Eagles hit vehicles all the time out here," said Doucette, who estimates he sees three or four dead ones along the road a year.

"They come in on a jack rabbit or a piece of road kill and then they get their belly full. They are slow and have a hard time taking off. If the wind is the right direction, sometimes they fly right into the path of a vehicle," he said.

Dean said most people don't slow down for eagles because they think they will fly off like ravens.

"They are not used to having any enemies, so they just face off," she said.