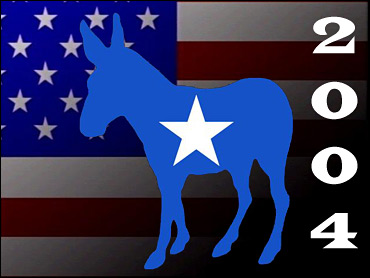 With a half-dozen Democratic presidential aspirants already in the race, potential candidates in the next wave are about to test their prospects with party people and voters.

Rep. Dennis Kucinich of Ohio and former Illinois Sen. Carole Moseley-Braun say they're filing papers this week to run for president and will see what kind of response they get in the coming months. Retired Gen. Wesley Clark said he's thinking about a presidential candidacy and getting encouragement from others to run, but he has "no timetable."

The Democratic National Committee's schedule for speaking appearances by the candidates appeared to be a catalyst for decisions announced by Moseley-Braun and Kucinich. Only candidates who have said publicly that they're running and forming exploratory committees are going to be speaking, party officials say.

On Sunday, the 58-year-old Clark said, "Well, I have thought about it and a lot of people have asked me to think about it."

The former NATO commander said on NBC's "Meet the Press" that he has no timetable for deciding.

Both Kucinich and Moseley-Braun acknowledge they will give their candidacies a few months to see what kind of public response they get.

"It would be a cold day and probably a snowy day in hell before a liberal Democrat could get back to the White House, but it looks like my time has arrived," Kucinich said Sunday while driving on a snow-covered highway to meet with Democratic Party activists in Iowa.

Moseley-Braun said in Iowa: "If the American people respond to my message and respond to my candidacy, then it will be a viable one."

And Clark said he's thinking about running for president because he has worries about the Bush administration's direction in international affairs.

While Clark says he's not a member of a political party, "it would be hard to conceive of running as a Republican only because the administration's policy is what's causing me to have these concerns."

"We're at a turning point in American history here. We are about to embark on an operation that's going to put us in a colonial position in the Middle East following Britain, following the Ottomans," he said. "It's a huge change for the American people and for what this country stands for."

Others are maneuvering to keep their options alive.

Aides to Florida Sen. Bob Graham said last week that he's going to be forming an exploratory committee in the next few weeks and will decide in April if he plans to proceed with a candidacy.

Former Colorado Sen. Gary Hart, who ran in 1984 and 1988, is giving four policy speeches around the country through early March and is listening to the response he gets from the public.

And Connecticut Sen. Chris Dodd is reportedly still considering whether he wants to get in the race.

With no clear front-runner in the mix, it is natural for the Democratic field to attract people who want to test how their message will be received.

As presidential scholar Charles Jones describes it: "What do they have to lose?" But he says he expects that several in the Democratic field will drop out once they decide they are gaining no traction.

Moseley-Braun this weekend explained her strategy of testing whether the public will respond to her candidacy.

"If they don't, then we'll probably fold our tent in September or thereabouts and support whoever the Democratic nominee might be," she said, quickly adding: "But I have every intention of winning the nomination."