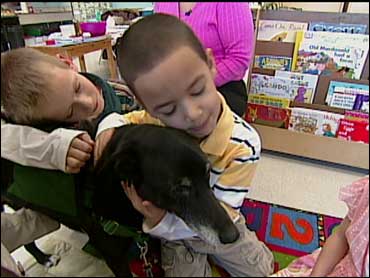 Every kid in Penny Weiser's first-grade class is capable of making noise. Marc Oliviere had just chosen not to.

"Lovely little guy. Seemed, you know, happy to be in school. And he was not talking," Weiser told CBS News correspondent Steve Hartman.

It's actually not uncommon for some kids to clam up at school. It's called "selective mutism." But this was different.

"How was school? Nothing," Marc's mom, April said. He didn't talk at home, either.

"Where would you like to go today? Nothing," she said.

Not ever. For six years.

It was six years and barely a peep, even though doctors could find nothing medially wrong with the child. Everyone was at wit's end, until one day last December when Marc came home from school looking like he was about to burst.

April says her so spilled more words in that one minute than he had in his entire lifetime. Most of them about Boo.

Boo is a dog. That day in December, and twice a month, Weiser brought in the Delta Therapy dog. Boo did a few tricks, got a few pets, and stayed for story time.

By adult standards, it really wasn't anything worth running home about.

But in the mind of a first grader.

"There was something about this dog that got him to open up," his mom said.

Since then, April says, he's hardly shut up. Which is fine by her.

Because no one knows why Marc wasn't talking in the first place, it's hard to say for sure why he's starting to now.

In fact, some experts have questioned how a dog possibly could work such magic - to which folks here reply that those experts … don't know Boo.