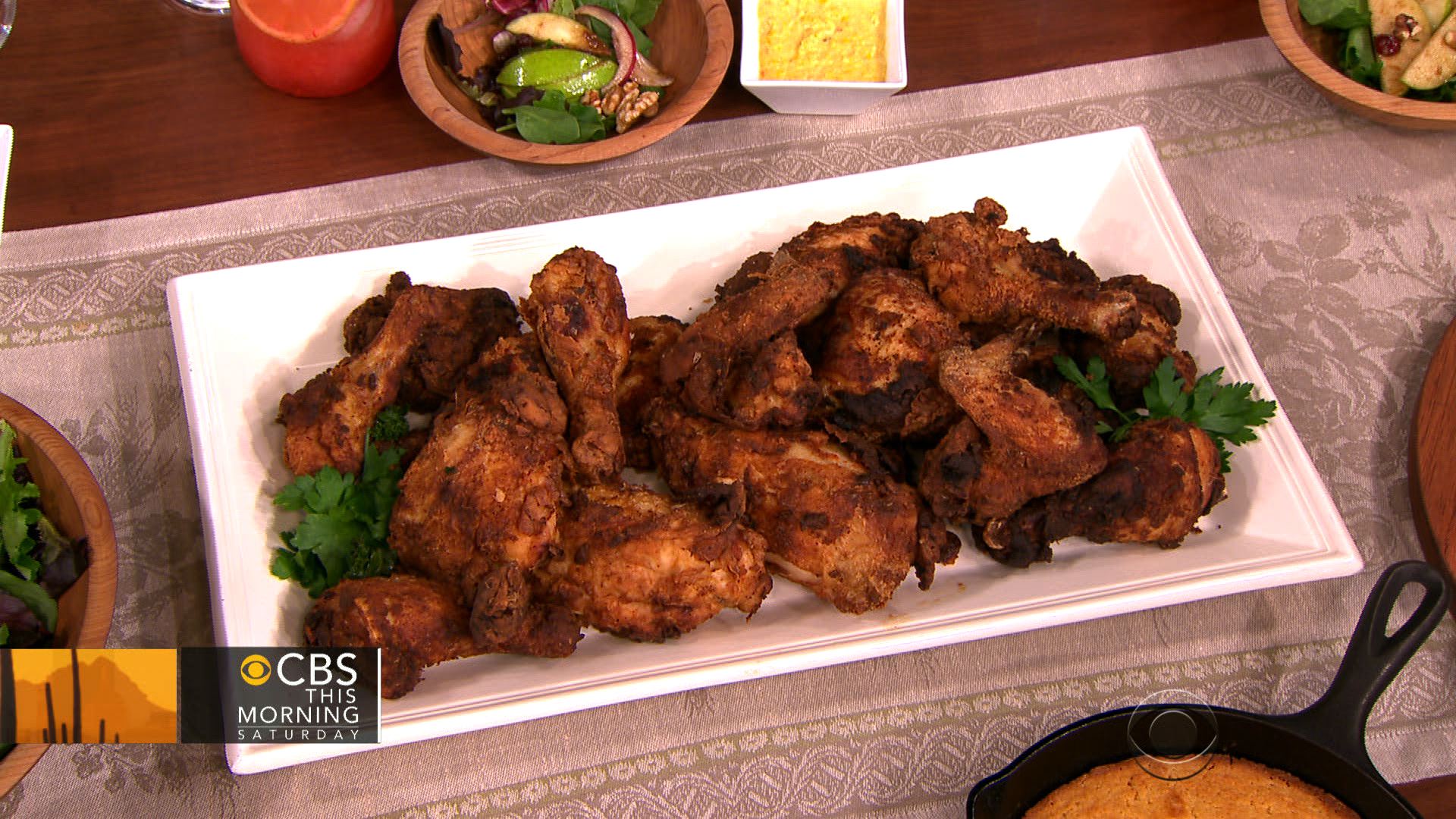 (CBS News) Chef Jeff Henderson is the best-selling author of "If You Can See It You Can Be It" and host of the syndicated show "Family Style with Chef Jeff," but his road to success wasn't easy.

Henderson went from being a cocaine kingpin to serving time in federal prison, which is where he became head inmate cook and found a love of cooking.

He grew up in South Central Los Angeles and turned to petty crime early in life. He moved to San Diego with his mother and grandparents but continued stealing to make money. When they moved back to Los Angeles he fell in with a bad crowd and started selling drugs. He was eventually arrested by a joint drug enforcement task force and sent to jail for 10 years.

When Henderson was released, he hit the pavement looking for a kitchen job. Years later, he's worked himself to the top of his industry as the first African-American executive chef at the Bellagio in Las Vegas.

1. To make the spice mix, whisk together the pepper, salt, garlic powder, onion powder and cayenne. Divide it in half and add one-half to the flour. Mix well with and set aside.

2. Rinse the chicken and pat dry with paper towels. Season with the second half of the spice mix. Place chicken in a medium bowl. Coat with the buttermilk. Cover and let marinate in the refrigerator for up to 24 hours.

3. When ready to fry, remove the chicken from refrigerator and coat well with the seasoned flour. Heat the oil in a 12-inch cast-iron skillet to about 375 degrees. If you don't have a thermometer, test the heat by dipping one end of the chicken in the hot oil. If the oil starts boiling heavily, it's too hot. The oil should have a medium boil when the chicken is put in the pan.

4. Place chicken in the oil and fry. Turn two or three times, until golden brown. Remove the chicken from the skillet to a large plate lined with paper towels.

5 or 6 medium potatoes, peeled, washed and cut into quarters

1. Place the potatoes in a medium to large pot and add water to cover. Bring to a boil and add 1 teaspoon of salt. Reduce the heat to a medium simmer. Cook until the potatoes are fork tender, about 20 to 25 minutes

2. Drain the potatoes and place them in a large bowl.

3. Meanwhile, heat the buttermilk in a small saucepan.

5. Season with salt and pepper to taste.

2. Combine all the dry ingredients in a mixing bowl.

3. Whisk the milk, eggs and melted butter in a separate bowl.

4. Pour the wet ingredients into the dry ingredients, mix well. Halfway through the process, scrape the bowl, then continue mixing.

5. Pour the batter into a greasing 9-inch skillet. Bake for 30 to 35 minutes or until a toothpick inserted in the center comes out clean.

1. Using a large sharp knife, cut kernels off cob. Use a spoon to scrap cob removing any remaining starch liquid.

4. Reduce heat and allow corn to cook for about 10 minutes, stirring occasionally.

5. Add salt and pepper to taste. Pour corn into a blender and puree.

2. Place the mixed greens, red onions, apples, cranberries and walnuts into a medium to large bowl. Toss gently and season with the salt and pepper to taste.

2. Add onions and bacon to pan. Cook until caramelized.

3. Add garlic to pan and saute until soft.

4. Add kale and season with salt and pepper.

5. Cook for about 5 minutes or until kale is tender.

3. Cut the bread into small cubes and place into a 13-by-9-inch baking pan. Pour egg mixture over bread cubes and push down until bread has soaked up the mixture.

4. Bake until the center is set, about 30 minutes. Serve warm with a scoop of ice cream.

1. Add water to large glass bowl, whisk all other ingredients.

2. Add to glass pitcher, garnish with sliced strawberries and fresh lemon slices and a sprig of mint and pour