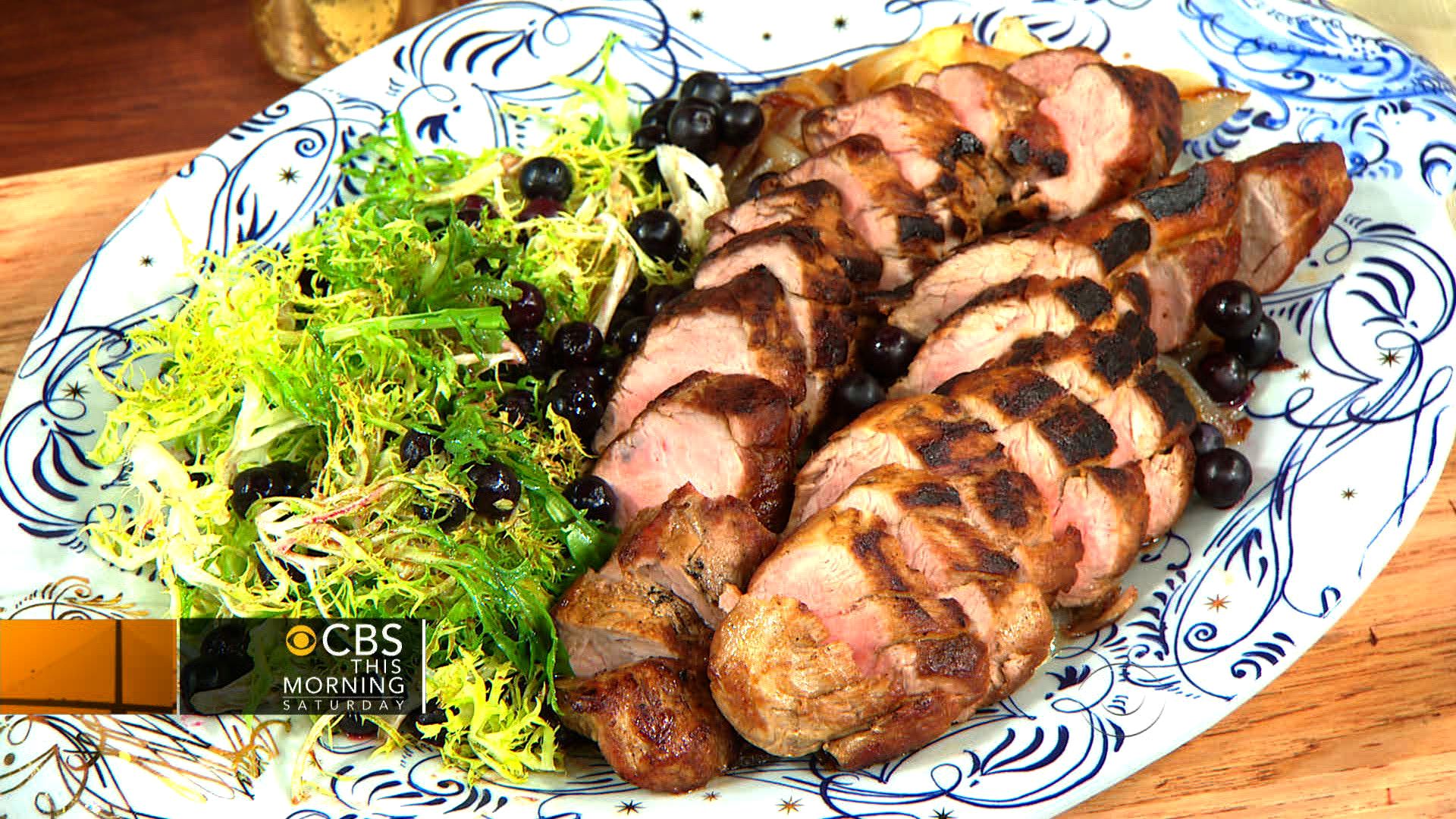 (CBS News) Chef Hugh Acheson was born and raised Ottawa, Canada, but after a turn in the South he has started to put his own stamp on southern cuisine.

He is chef and partner of three Georgia restaurants, Empire State South, Five and Ten and The National.

The chef started cooking at a young age and took his first restaurant job at the age of 15.

He is a two-time James Beard Award winner and has been named best chef by Food and Wine magazine. Acheson is also a judge on "Bravo's "Top Chef" and "Top Chef Masters."

He shared his ultimate dish, pan-roasted pork tenderloin with Georgia blueberries, on "CBS This Morning: Saturday."

1 vidalia onion, peeled, halved and sliced thinly with the grain

1.Season the pork with half of the salt.

2.Place a large pan over medium heat and add the canola oil. When the oil shimmers add the pork.

4.The pork should be medium rare to medium and have an internal temperature of about 140 degrees F.

5.Add the onion to the oil still on the heat and caramelize the onions for 10 minutes over medium heat while the pork rests.

6.While the onions are cooking, make the vinaigrette. Put the mustard and the sorghum in a small bowl. Slowly whisk in the olive oil and then add the cider vinegar. Season with the remaining 1/4 teaspoon salt.

7.Turn the onions once or twice during their cooking. You want to develop color on them but not burn them.

8.Place the frisee in a bowl with the blueberries and add two tablespoons of the vinaigrette. Toss well and season.

9.Thinly slice the pork and arrange evenly on four plates. Top the pork with some frisee and blueberries, then the onions, and dot with a little more vinaigrette on each plate.

1.Core the tomatoes and cut them into a large dice, about 1 inch by 1 inch. Place the tomatoes in a large bowl, season with salt and let them sit for 30 minutes at room temperature.

2.Add the corn, vinaigrette, cider vinegar, cheese, parsley, and basil to the tomatoes.

3.Gently mix with a spoon and serve immediately.

2.Add the olive oil and butter and when the butter is melted add the okra.

3.Saute for three minutes and then season with salt and add the almonds.

4.Toss well and remove to a platter. Serve immediately.

1.Pack the blueberries into the jars and set aside.

2.Combine the salt, sugar, star anise clove, vinegar and water in a non-reactive pot and bring to a boil.

3.When the boil has been reached, reduce the heat to low and simmer for 5 minutes.

4.Carefully ladle the hot pickling liquid into the jars, leaving 1/2 inch of headspace in each.

5.Cap with lids and bands and then refrigerate or process according to jar manufacturer's directions.

1.Place a heavy fry pan over medium heat and add the butter to the pan. When the butter bubbles and froths add the pecans and toast lightly, stirring often.

2.Add the sugar and 1/4 teaspoon of the salt and toss to coat.

3.Sprinkle the pinch of cayenne over the nuts. When they are nice and toasted, remove the nuts to a plate to cool.

4.Place the frisee in a large salad bowl and season with the remaining 1/4 teaspoon of salt.

5.Add the vinaigrette, blue cheese, and the pecans. Toss well.

6.Add the blueberries to the salad, and serve immediately.

Salt and pepper to taste

1.Put the mustard in a small heavy bowl that won't move around when you start whisking.

2.Slowly whisk in the olive oil to emulsify.

3.If it gets too thick, dilute with a touch of water.

4.Once the oil is incorporated, add the lemon juice and vinegar, season to taste, and finish with the parsley.

1 fresh vanilla bean, seeds scrapped and bean shell saved for another use

2.In a large mixing bowl, toss the peaches, blueberries, lemon zest, lemon juice, and 1/2 of the vanilla beans. Pour the mixture into a 8x8-inch square baking dish and set aside.

3.Place the sugar, flour, salt, cinnamon, sesame seeds, and pecans in a mixing bowl and cut in the butter using a pastry cutter. Alternately, you can easily accomplish this by pulsing all in a food processor until the butter is well incorporated. Crumble the mixture over the fruit and place the dish in the oven. Cook for approximately 30 minutes or until bubbly and browned.

4.When it is done, remove the crisp from the oven and let cool for 10 minutes. To serve, place a scoop of the crisp into bowls and top with a scoop of vanilla ice cream.

1.In a double old-fashioned glass muddle the blueberries and lemon thyme thoroughly with the maraschino liquor.

2.Add the mint leaves and gently press put do not make a pesto.

3.Add the gin and stir gently to combine. Grab a clean dish towel and fill it with ice.

4.Use something heavy to crush the ice into small pieces.

5.Add the ice to the glass with all the other ingredients, squeeze the lemon wedge over the top and gently stir.

6.Be careful not to bring too much of the blueberries and mint to the top for texture purposes.