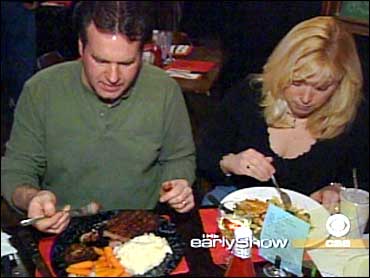 When you look at a menu, do you really know what you're ordering? The Early Show has teamed up with Family Circle magazine to test your knowledge of nutrition when it comes to fast food and dining out.

The April issue of the magazine features a quiz: The Dining Out Diet Quiz, to help us find out just how savvy we are when it comes to dining out and dining healthy. It's a challenge New Jersey mom Debbie Vanderwiele faces whenever her family goes out to eat.

Vanderwiele is constantly trying to please the finicky taste buds of her family with tasty yet healthy foods.

She says, "We have lots of mozzarella cheese in here, because the kids like mozzarella cheese. Pepperoni, the kids really like pepperoni for snacks, but that's probably not the healthiest. We ate out at Burger King, but that was like a treat. We usually don't do that."

The stay-at-home mom cooks almost every day and dines out with the family on special occasions. She says the biggest challenge is eating healthy when you're out with the kids.

She notes, "You want to go to a restaurant that's kid friendly. But they put a menu down in front of the kids that they can color on and it has a children's menu, and it's usually fried foods or macaroni and cheese. And at the restaurant, they get offered soda, so of course they're going to say they want soda. And I can't even argue with it, because I know that I'm just going lose the battle."

Got Too Many Miles? Shop Online

But we caught up with the family out to dinner and almost everybody was trying to eat a little healthier, even 3-year-old Sabrina, who asked for milk instead of soda.

However, Debbie believes her husband, Steve, could have made a better choice with his steak and potatoes.

She says, "I'd really like to get some tips to help me maneuver around it. How could I make it fun for the kids? Because when we go out to eat, it's like a special thing. What else could I order for them that would be healthier, but fun?

"This mother is really smart," says Susan Ungaro, editor-in-chief of Family Circle magazine to The Early Show co-anchor Hannah Storm. "She's saying, 'If my girls are going to have the fried chicken fingers, have them make a choice to not have the fries, and have a baked potato. Have a vegetable. Have salad.'

"I understand she was, like, upset about the soda thing. Obviously, when you're going out to dinner, you got to realize that children want a treat, so you've got to steer them to some things that are healthy. But this is a time to indulge a little bit. Go for a turkey burger, not a hamburger and you save 100 or more calories and several fat grams as well."

If, like Debbie Vanderwiele, you are in a similar predicament, take The Dining Our Diet Quiz, and find out about healthy alternatives you can choose when eating out.