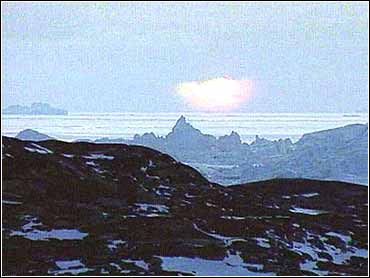 Jonathan V. Last is a senior writer at The Weekly Standard.


A few weeks ago, Palle Christiansen, Greenland's minister of finance warned that his country was facing an existential threat from immigration. Yet unlike the far-right politicians of Europe who take up this theme, Christiansen was not fretting over foreigners coming to his country's shores, but about fellow citizens leaving.

For the past three decades, Greenland has been growing increasingly prosperous and inching away from its colonial sovereign, Denmark, toward full independence. But prosperity has also led more and more educated young Greenlanders to take up opportunities elsewhere. Greenland's encounter with globalization is a case study in how unpredictable the forces of modernity can be. On the one hand, globalization offers the tantalizing prospect that Greenland will soon be able to afford independence. On the other hand, it presents the unsettling possibility that Greenland as it has existed for the last century will simply cease to be.

To understand Greenland's uncertain future, you have to understand its past. Greenland was rediscovered by Europe when Hans Egede, a Norwegian missionary, came ashore in 1721 and began living with the native Inuit peoples. Norway passed its claim on the island to Denmark, which, because Greenland had little to offer of economic or strategic value, remained something of an absentee colonial power. The Royal Greenland Trading Company, Denmark's state-controlled proxy, rarely turned a profit. For the Danish crown, Greenland was a minor expense worth keeping for purposes of imperial prestige.

When Denmark was occupied by the Germans in 1940, the United States agreed to protect Greenland in exchange for basing rights on the island. (In 1946, Secretary of State James Byrnes suggested that America ought to purchase it outright.) Through all this time Greenland had remained mainly undeveloped. With only a handful of villages of more than 1,000 people, Greenlanders mostly lived rustic lives. Hunting and fishing were the primary economic activities. In 1966, Greenland had a population of 41,000 and a total of 1,500 motorized vehicles (cars, trucks, motorcycles, fire engines, buses, etc.).

During the late 1960s and early 1970s, a movement for independence took hold among Greenlanders. It was a reaction to Denmark's attempt to join the European Economic Community, the forerunner of the European Union. Worried that the EEC treaty would grant other countries access to their fishing grounds, Greenlanders voted against joining the EEC in 1972 even as the rest of Denmark voted for it. Seven years later, in 1979, Greenland was given its first taste of self-government, and its first significant decision, in 1984, was to leave the EEC.

The Future of the American Dream

In 2008, Greenlanders voted overwhelmingly to assume home rule. They created their own parliament and took control of domestic politics and their budget. The island's only residual tie to Denmark is foreign policy. And money: the Danes send their wards an annual subsidy of $660 million-roughly $11,000 per Greenlander.

Greenland's theory of independence is based on the idea that one day this allowance will be unnecessary. The island has extensive mineral reserves, which are just beginning to be tapped. An assortment of international conglomerates are prospecting for platinum, gold, copper, iron, and nickel.

In 2005 a Swedish company established an olivine mine. A Canadian firm is building a $1 billion molybdenum mine on the eastern half of the island while an Australian outfit is considering a lead-zinc mine in the north. Alcoa is planning an aluminum smelting operation on the west coast. All told, the Greenlandic Bureau of Minerals and Petroleum expects seven mines to open by 2015, creating 1,500 jobs. The island could be financially self-sufficient in five years.

And then there are the oil prospects. If offshore oil is found-the U.S. Geological Survey estimates there are some 31.4 billion barrels off the northeast shore-Greenland could become very rich, very fast. The country's Raw Minerals Directorate says that a single oil strike would likely generate about $1.9 billion a year in revenue.
So Greenland seems headed for complete independence. The question for people like Christiansen is whether there will be any Greenlanders left to enjoy it.

Greenland is, of course, a misnomer: Whatever the country's charms, it is still a rock mostly covered with ice. In the largest town, Nuuk, the mean temperature in December is 17º Fahrenheit; in July, it's 46 degrees.
Greenland has always had more people going than coming. In the past, tribal ties were enough to keep Greenlanders in Greenland. But globalization has made emigration easier and more attractive.

What's particularly worrisome is that the largest numbers of emigrants are 15- to 25-year-olds. Lars Petersen of Statistics Greenland explains that a third of the country's emigrants name education as the reason they leave and that half of the Greenlanders who go to university abroad do not return.

Losing people in such numbers is bad enough, but losing young adults in their prime childbearing years will depress the country's fertility rate down the road. Greenland's fertility rate is healthy enough right now-2.3, which is above replacement-but they are on the downslope of a baby boom: In 1991, Greenland had just over 1,200 live births, and since then the number of babies being born annually has trended downward. In 2007, just over 800 babies were born. The emigration and falling birth rate add up to a shrinking population.

Then there's Greenland's suicide rate. In 1950, suicide was almost nonexistent on the island-there were two suicides in 1960; one study put the average rate near 0.3 suicides per 100,000 people. In the rare instances where suicide did occur, it was among the elderly. But beginning in 1970 the suicide rate increased dramatically, peaking in the early 1990s at 107 suicides per 100,000 people. (Nearly all of the suicides were among teens and young adults, making their losses even more consequential in terms of population decline.) Today Greenland's suicide rate-it's now 100 per 100,000-is the highest in the world. No other country-not Japan or Belarus or Kazakhstan-has a rate even half that. These individual tragedies constitute a broader societal tragedy. Suicide is, after all, emigration by other means.
Population decline has brought with it all sorts of practical problems.

Since 1970, the country has become steadily more urbanized as Greenlanders relocated from the outer settlements to the towns, primarily Nuuk (pop: 15,105), Sisimiut (pop: 5,458), and Ilulissat (pop: 4,528). Only about 9,000 Greenlanders still live in settlements, and the government has made noise recently about relocating citizens in hamlets with fewer than 100 people.

The labor market in Greenland isn't especially tight, but the country often has trouble filling skilled positions. Doctors and nurses, for instance, are in very short supply and one in every four health-sector positions is vacant. There was talk last year about Greenland "renting" doctors and nurses from Iceland.

The subject of guest workers is particularly delicate. Last year, then-prime minister Hans Enoksen said that Greenland hoped for "a quick takeover of the responsibility for immigration and for immigration legislation [from Denmark]." "We want to do this," he said, "because we expect a major labor shortage. For this reason we will welcome foreigners who want to work in this country." But Greenlanders understand that even a small number of foreigners would have the demographic weight to change their society. As Charles Emmerson reports in The Future History of the Arctic (2010), "Many Greenlanders are keen to change voting rights to ensure that workers brought in for just a few years will not be able to vote in Greenland's elections."

There is already a cultural tension between Inuit Greenlanders and Greenlanders of Danish descent. In 1950, Denmark embarked on an initiative to modernize Greenland. Sermitsiaq, Greenland's main newspaper, explains, "That year represented a landmark social change for Greenland as it launched its transformation into a welfare state backed by Danish resettlement and modern aid." From 1950 to 1970, Danes came to Greenland in large numbers.

As the Danes moved in, they built up the native government bureaucracy, from schools to state services. By 1962, 45 percent of Greenlanders were state employees. Greenlandic became the official language of Greenland in 2008, but Danish is still prevalent. Schools, for instance, still operate primarily in Danish. Last year there was a commotion when one of the political parties put forward a bill requiring that only Greenlandic be spoken on the parliament floor. Because 4 of the 31 elected representatives speak only Danish, the bill was quickly withdrawn.

An endangered language, a declining population, and mass emigration. A suicide epidemic that began the instant European modernity was introduced. You can see why ministers are concerned.
Greenland has a growing economy and the prospect of political independence.

It also faces a real chance that its people will bolt for the exits in such numbers as to make the prosperity meaningless and full nationhood unworkable. Their experience is a reminder that the effects of globalization can be as unpredictable as they are profound.

By Jonathan V. Last:
Reprinted with permission from The Weekly Standard