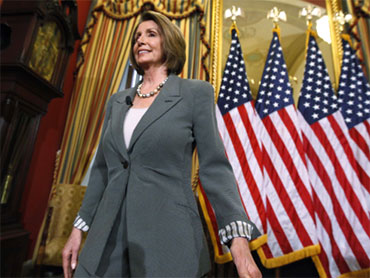 The three times I have witnessed a minority win the House of Representatives, it has been through aggressive discipline and relentless combat. Newt Gingrich and John Boehner did not win their majorities by compromising with the majority, blurring the lines of distinction or giving good television interviews, and neither did Nancy Pelosi. The Democrats need a wartime general and Pelosi, who proved herself capable of assembling a team to lead her party to victory in 2006, is the best positioned to do it again.

The "shellacking" the Democrats took in the midterm election, as the President described it in his press conference last week, will require different things from the President and the House leadership. The President, needing to rebuild his credibility with the American people, must signal to the independents that he heard their discontent and will govern with a focus on the economy; and his political and communications operation must give the American people a comprehensive, compelling and consistent message about what he is doing. For too much of the last two years it has felt like the White House has been selling us oatmeal, raisins and flour when people really want to buy cookies. All of the worthwhile policies coming out of the administration were sold more like stand-alone ingredients than part of a whole strategy that addressed our short term jobs problem and long term need to muscle up to the global competition we face.

Meanwhile, the President and his staff also have the difficult task of signaling to the 2008 Obama voters who have been losing faith that they "are (still) the ones we've been waiting for." To inspire the coalition of young people, minorities and first time voters to come back in 2012, the president will need to fight definitional struggles that clearly show the distinctions between him and the GOP House majority. That is where Nancy Pelosi comes into play.

While the President is doing an electoral two-step, the Democrats in the House will be on the front line of the definitional struggles, waging war with an out-of-touch and probably overreaching GOP majority. Pelosi has the credibility to hold the Democratic caucus together like no other leader in the House. As chief of staff to a member on the House Appropriations Committee, I watched her wage her first leadership race and learned firsthand that Pelosi is old school. She rewards her friends, punishes her enemies and builds alliances to accomplish her goals. Politicians tend to respect those qualities in one another and the team she led minimized internal conflicts by giving liberals, moderates and minorities seats at the decision-making table.

The biggest challenge Pelosi will have as leader is to put a fresh face on the Democratic caucus. The outgoing Speaker has big negatives, but any Democratic leader who has millions of dollars of negative television ads run against her with little money available to respond would. Pelosi might just be the new Ted Kennedy-like bogey woman of GOP TV ads, but her office should seek out ways to soften her image again once the noise from the campaign season has died down.

More importantly, Pelosi, Steny Hoyer and/or Jim Clyburn (who are vying for minority whip) are effective leaders, but at 70 years old or more, their faces are - ahem - not so fresh. Democrats need to put more faces on television that look like the voters they need to appeal to. House leaders like Chris Van Hollen, Debbie Wasserman Schultz and Xavier Becerra are quite effective spokespeople, and newly elected Cedric Richmond from Louisiana may be another strong addition to this cast.

Despite the damaging GOP ad campaign against Pelosi, most campaigns are about the voters' future more than the faces of the congressional leadership. On that front Democrats came up woefully short, not offering much for voters to rally around in this last election. It would be hard to find a political pundit, let alone a voter, who had a clue what the President or Democratic Congress wanted to do with power for two more years. The election became a choice between "change" or "more of the same" with Democrats arguing that the country should stay a course that it was unhappy with. Surprisingly they chose something new.

The country is ready for change that will more directly impact their lives, and President Obama and the Democrats will need Nancy Pelosi to rally moderate and progressive Democratic troops in the coming fights. If Tea Party members elected to the House of Representatives not only push legislation that will shock the country but divide Republicans, Democrats will need a proven leader like Nancy Pelosi who can hold the Democrats together and exploit those GOP vulnerabilities.