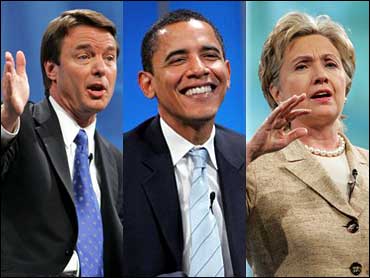 The Democratic party may be convincing itself that it's riding high in the polls toward a White House victory in next year's election. But you know what? On two key themes — taxes and national security — the Democrats may be dooming themselves to defeat.

Watching the two presidential debates, one can't help but notice the stark differences between each party's approach to these core issues. And it's hard to see how the general electorate is going to buy what the Democrats are selling.

To a person, each Democratic presidential candidate wants to undermine the global war against jihadist terrorism — wherever it may be and especially in Iraq. The Democrats see a civil war in Iraq, where the Republicans view a growing al Qaeda threat. And while Republicans talk about significantly increasing the defense budget and expanding American force levels for all the armed services, the Democrats are hoping for some sort of Iraqi peace dividend upon immediate withdrawal — one that can be re-channeled into higher domestic social spending.

To a person, each Democratic presidential candidate also wants to raise taxes on the rich and roll back President Bush's tax cuts. The Republicans, however, understand that those tax cuts have propelled economic growth and contributed to a stock market boom. And they recognize that Bush's Goldilocks bull-market economy — which I call the greatest story never told — relies on extending the investor tax cuts and perhaps even moving forward with a flat tax or national sales tax.

Finally, to a person, each Democratic presidential candidate also has it in for corporate America. The Democrats discuss various punishments for business — especially oil companies, but also drug, utility, and insurance firms. Not so for the Republicans, who talk about helping businesses and promoting entrepreneurship in our successful free-enterprise economy.

The differences between the two parties couldn't be clearer, and next year the voting public will have a very stark choice. But with this election season only two debates old, that choice already favors the Republican position.

Think of it: The Democrats talk about ending "tax cuts for the rich," all while bashing American corporations. But isn't this is the same tired message that sunk Al Gore, Mike Dukakis, Walter Mondale, and Jimmy Carter? It's never been a winner, and it's going to help cripple whoever grabs the Democratic nomination next year.

And as former Commentary editor Norman Podhoretz has written, as the Democrats pay too much attention to the left wing of their party, their defeatist, weak-on-national-security riff may have already sunk them in 2008.

Consider this: When the appropriate time comes for a gradual troop withdrawal from Iraq, the voting public is far more likely to want a tough-on-defense president to negotiate the event. Go all the way back to the Korean War. Voters selected General Dwight D. Eisenhower to negotiate withdrawal, rather than the much more liberal Adlai Stevenson. Or recall that in 1968 voters chose the tough-minded Richard Nixon to manage a pullout from South Vietnam, rather than the fuzzy-thinking Hubert Humphrey.

Here's another example of the ever-widening void that separates each party's stable of candidates, and of the fact-versus-fiction choice that awaits voters in 2008: House and Senate Democrats are in the process of crafting a five-year budget resolution that leaves out investor tax-cut extensions for capital gains and dividends. They say they are trying to balance the budget and increase tax revenues. Yet the latest budget report unequivocally shows that these very same investor tax cuts have paid for themselves.

Non-withheld income taxes — read cap-gains, dividends, and income from small owner-operated businesses — hit a record high of $49 billion on April 24. So far this year, this tax-collection category has shot up 30 percent, while withheld income-tax collections at lower tax rates have jumped 17.5 percent.

In other words, the Laffer curve is working: lower tax rates lead to higher tax revenues through a growing economy and a larger income base. By removing pro-growth tax cuts, the Democratic budget will actually slow the economy, diminish revenue growth, and increase the out-year budget gap.

Ignoring all this, in addition to the reality of a 4.5 percent unemployment rate and Dow 13,000, is a Democratic triumph of liberal ideology over objective empirical analysis.

It's also a recipe for Democratic disaster about a year and half from now.
By Larry Kudlow
Reprinted with permission from National Review Online