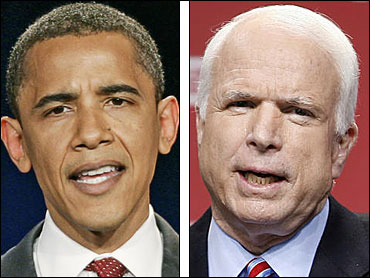 This column was written by John B. Judis.

The Democratic primary is over. Hillary Clinton might still run in West Virginia and Kentucky, which she'll win handily, but by failing to win Indiana decisively and by losing North Carolina decisively, she lost the argument for her own candidacy. She can't surpass Barack Obama's delegate or popular vote count. The question is no longer who will be the Democratic nominee, but whether Obama can defeat Republican John McCain in November. And the answer to that is still unclear.

During the last two months, Obama has faltered as a candidate. He has seen his political base narrow rather than widen, and some of his strengths turn into weaknesses. Of course, he has had to deal with the scandal surrounding Reverend Jeremiah Wright, but even so, he needs to remedy certain flaws in his political approach if he wants to defeat McCain in the fall. Here is a brief list:

The Base: As the primaries have proceeded, he has become more dependent on strong, almost unanimous, support from African American and young voters. For instance, he lost the California primary in February, but he still beat Clinton by a whopping 55 to 35 percent among white men. In North Carolina, where the white Democratic electorate is liberal and tolerant (only five percent of the primary electorate voted against Obama because of race, compared to over 11 percent in Pennsylvania and Ohio), Obama could still win only 36 percent of white voters. In the fall, when African Americans will only make up about 23 percent of North Carolina's electorate, he would have to win 38 percent of all whites to carry the state.

Ideology: In the Iowa Caucus, Obama defeated Clinton among "moderate" voters by 33 to 31 percent and barely lost "conservatives" by 22 to 21 percent. He was perceived as a middle-of-the-road candidate or, even better, as standing above ideology. But he increasingly is seen as the "liberal" or even "very liberal" candidate. In Indiana, he bested Clinton among liberals 55 to 45 percent but lost moderates by 53 to 46 percent and conservatives by 65 to 35 percent. He can't carry that political image into the fall and hope to defeat McCain. In most of the swing states that he would need to win, liberals occupy a much smaller niche than they in the Democratic primary. Moderates are the key. They make up 45 percent of the electorate in Virginia and 43 percent in Colorado--two states that the Obama campaign thinks it could win.

Forcefulness: In the 2004 election, voters repeatedly expressed their preference for a "strong leader," but Obama has yet to establish himself in this respect. He is regularly judged more "honest and trustworthy" than Clinton, but those qualities have proved less important to choosing a president. In Indiana, voters thought Clinton more qualified to be commander in chief by 54 to 43 percent. Nine percent of Obama voters acknowledged that Clinton was "more qualified to be commander in chief." In North Carolina, eleven percent of Obama voters preferred Clinton. Obama appears to be somewhat effete, which will, unless remedied, cause him difficulty against McCain in the fall, particularly among white males.

Policy priorities: Obama based his campaign against Clinton on his vote against the Iraq war and on a promise to change "Washington." But the public's priorities have changed. In New Hampshire, 31 percent thought the war the most important issue. In Indiana, only 18 percent of voters thought that. Still, Obama seems far more comfortable talking about the war and government reform. In his stirring speech, he stumbled when he started talking about jobs being shipped overseas. He has to be able to drive home his differences with McCain on the economy if he wants to broaden his political base.

Values and religiosity: Obama initially held his own among voters who attend church regularly. In New Hampshire, he bested Clinton by 37 to 32 percent among weekly churchgoers--and he didn't have to include religious African Americans in the total. But Obama has increasingly lost this vote and gained adherents among the non-religious. In Indiana, he lost to Clinton among weekly and occasional churchgoers but defeated her among those who never attend church. That can hurt him in the fall in states Obama wants to win. In Virginia, for instance, weekly and occasional churchgoers made up 83 percent of the general electorate in 2004. The challenge for Obama will be to reach out to religious voters without reminding voters of his ties to Reverend Wright.

Can Obama turn it around? As he showed last fall and winter, when he suddenly regained his footing as the Iowa primary approached, Obama is capable of refocusing his energies. And now--with Clinton clearly out of contention--he will have a chance to do so.
By John B. Judis
If you like this article, go to www.tnr.com, which breaks down today's top stories and offers nearly 100 years of news, opinion and analysis