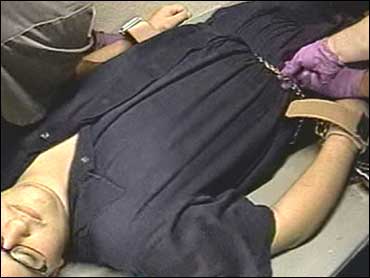 You wouldn't imagine these days that a mental patient could be chained to a concrete slab by prison guards until he died of thirst, but that's how Timothy Souders died and he is not alone.

Souders suffered from manic depression. And like a lot of mental patients in this country, he got into trouble and ended up not in a hospital, but in jail. It was a shoplifting case and he paid with his life.

As correspondent Scott Pelley reports, no one would have been the wiser, but a medical investigator working for a federal judge caught wind of Souders' death and discovered his torturous end was recorded on videotape. The tapes, which are hard to watch, open a horrifying window on mental illness behind bars.

In 2006, Tim Souders was in solitary at the Southern Michigan Correctional Center. He was 21, serving three to five years. Though an investigation would show he needed urgent psychiatric care, Souders was chained down, hands, feet and waist, up to 17 hours at a time. By prison rules, all of it was recorded on a 24-hour surveillance camera and by the guards themselves.

The tape records a rapid descent: he started apparently healthy, but in four days Souders could barely walk. In the shower, he fell over. The guards brought him back in a wheelchair, but then chained him down again. On Aug. 6th, he was released from restraints and fell for the last time. Souders had died of dehydration and only the surveillance camera took notice.

His short life began in Adrian, Mich. Souders was a kid whose troubles didn't start until late in his teenage years. It was then, his mother, Theresa Vaughn, told 60 Minutes that he began acting strangely.

"It was January in the wintertime. And you know, he was running around outside with his clothes off, thinking he was a knight, fighting dragons. You know, you lose touch with reality," Vaughn remembers.

He was troubled by anxiety and depression, often in and out of the hospital. After one hospital stay, he was caught shoplifting two paintball guns. He grabbed a pocket knife, threatened employees, and then begged a cop to shoot him. Instead, he was stunned with a Taser.

"He had gotten to the point where his thinking wasn't straight, and he was suicidal. And he should've never went to jail," Vaughn says.

In jail, Souders tried to kill himself three times. He pled to resisting arrest and assault, for waving the pocketknife, and ended up in a Jackson County prison complex, with 5,000 inmates. It's a troubled place—prisoners filed suit there in the 1980's and since then, their welfare has been monitored by a federal judge.

When Souders arrived he was part of a national trend: there are 300,000 mental patients behind bars nationwide. That's because starting in the 1960's many mental hospitals have been closing. And as patients ended up in jail, prisons became the new asylums.

"They became de facto mental hospitals and the prisons are ill equipped to handle it," says Robert Walsh, a clinical psychologist working inside Michigan prisons for the past 25 years.

Walsh is an insider. He was a deputy warden and director of psychological services at the prison where Souders died. He retired six years before Souders arrived.

"Given what you see in the Souders videotape, what should have been happening?" Pelley asks.

But there was no mental health staff to consult—the psychiatrist was on a seven-week leave.

"Then he should have been replaced. It's too critical a situation," Walsh remarks.

What landed him in solitary was when Souders took a shower without permission. When he broke a stool and used his sink to flood his cell, the chains came out—what the prison calls "top of bed" restraints.

Walsh did an extensive study of Michigan prisons and found that the staff often tries to punish psychotic inmates into better behavior.

Incredibly, he found in a number of cases, the staff insists inmates are not mentally ill, despite profound insanity.

"One man, he enucleated his eyes, cut 'em out, because he felt they were offending God. These were men that were, claimed to be manipulative, malingerers and non-mentally ill," says Walsh.

"Wait a minute. Did I just understand you to say that the department of corrections declared those men not mentally ill?" Pelley asks.

"The staff did. That's correct. The psychiatric and psychological staff considered, considered them to be malingerers and manipulators that went to extremes," Walsh says.

After his arrest, a state psychologist said Souders was trying to manipulate the staff when he stabbed himself seven times in the stomach in a suicide attempt. Months later, in solitary, there was no psychiatric intervention, even when Souders was raving.

A social worker wanted him transferred to a hospital, but the paperwork never got done. The guards resorted again to chains, which the federal judge overseeing the prison criticized as "punitive restraints."

But Tim Souders wasn't harming anyone and a prison report shows it was his attempt to break the stool and flood his cell that led to the authorization to put him in top-of-bed restraints.

"It depends on you how long you're in these, okay? Can't flood your cell, can't do that type of stuff. We put you in restraints to kind of control your behavior," an officer told Tim.

"We've seen cases where people have been in restraints on and off, day after day after day. And I have not found a mental health expert who has told me that that's a good idea," Pelley tells Caruso.

Two hours? 60 Minutes checked the surveillance tape. Souders was up some of the time, but 60 Minutes found he was restrained for stretches of 12 hours, 16 hours, and 17 hours.

Tim Souders had bed sores and on the third day in restraints, he resisted for the first and only time, complaining bitterly about the hours in chains.

"I'm tired of this. Eighteen hours is not justified," Souders could be heard saying on the videotape.

"I absolutely take that seriously. Prison is a difficult environment. I have correctional officers, who become accustomed to having urine and feces thrown on them by prisoners, who have prisoners who are so injurious that they will open their bodies to remove organs from others. And so we have to rely on our responsibility to keep people safe," says Caruso.

But Michigan prisons have not been safe for mentally ill prisoners who have died needlessly. At least one starved to death, and others died of dehydration like Souders. Jeffrey Clark, a paranoid schizophrenic serving time for robbery, died of thirst in solitary. His sister, Bonita Clark-Murphy, pored over investigative reports of his death.

"There are reports that he had his mouth up against the plexiglas window, begging and pleading for water and air, and for someone again, to turn a deaf ear and a blind eye to that, that's why I say Jeffrey was tortured," she says.

Clark-Murphy filed suit against the state; she claims the warden told the family that her brother died of an infection.

"We buried Jeff, not even knowing what happened," says Clark Murphy.

"It seems that the prison officials expected to tell you that this was natural causes, and that you'd just leave it alone," Pelley asks.

"Absolutely. And they were so wrong," she replies.

He became delusional, refusing water when offered. But not even that was a medical emergency to the staff. "Souders has refused. Officer asked him if he needed water. He replied, 'No,'" an officer could be heard on the tape.

After Souders' death, federal Judge Richard Enslen, who oversees the prison, wrote that inmates are exposed to an "unauthorized death penalty at the hands of a callous and dysfunctional health care system that regularly fails to treat life- threatening illness."

"I understand that it's easy to take individual cases and to sensationalize them, and you know, relentlessly replay the facts of an individual case. But I also think it's unfair," argues Caruso.

"But director, fair to say, people starve to death and die of thirst in your prisons?" Pelley asks.

"Any death, any incident like that in our custody is a tragedy. I will not deny that. It is not…that certainly isn't something that, you know, we set out…I mean, we have people come to us dying," she replies.

"They don't come to you dying of thirst and dying of starvation. How can that happen under your custody?" Pelley asks.

"I'm not gonna address cases that are under litigation. I cannot do that," the prison system director replies.

The Souders case is under litigation. His mother, Theresa Vaughn, is suing. She says the prison never told her how her son died. She found out in the "Detroit Free Press."

Vaughn has seen the videotapes of her son's last days and says they give her nightmares. "I cannot believe anyone would treat another human being that way at all. That they can watch over a four day period, slowly declining, slowly dying before their eyes," she says.

Since 60 Minutes first reported this story, guards who kept Jeffrey Clark locked up while he was dying of thirst were found guilty of gross negligence, and the Clark family was awarded almost $3 million. The legal case over the death of Timothy Souders is still pending.
Produced By Solly Granatstein

The secret U.S. unit that helped the Allies beat Hitler
Thanks for reading CBS NEWS.
Create your free account or log in
for more features.
View CBS News In
CBS News App Open
Chrome Safari Continue
Be the first to know
Get browser notifications for breaking news, live events, and exclusive reporting.