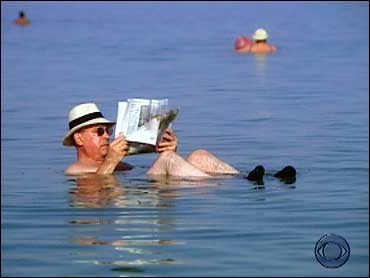 There is simply nowhere else on earth like the Dead Sea. It lies at the lowest point on the planet, more than 1,300 feet below sea level, CBS News correspondent Richard Roth reports.

It's too salty to sustain life, but just beyond its shore, a unique micro-environment of animals and plants has flourished, and now faces a threat: The Dead Sea is disappearing.

"The Dead Sea is dying because the waters that used to feed the Dead Sea, the holy River Jordan, is no longer flowing," says Gidon Bromberg, Director of Friends Of The Earth in the Middle East.

The Dead Sea is dropping at a rate of a yard a year — one-third has already dried up. And this isn't the fault of global warming.

The biblical Jordan River, which still draws pilgrims for baptism, is just a trickle of sewage now where it supplies the Dead Sea. This has happened because Israel, Jordon and Syria all have been diverting it for water to drink and to irrigate desert crops.

That has left a widening landscape of sinkholes and mud flats where the Dead Sea has receded — and left a tourist industry struggling against the falling tide.

When it opened 20 years ago, for example, a spa just a few steps from the salt water was right on the shore of the Dead Sea. Now the shoreline is almost a mile away. Wagons drawn by tractor now shuttle visitors from the mineral-rich mud baths to the sea it's impossible to sink in.

The Dead Sea's buoyancy is not in jeopardy because as the sea shrinks, it becomes more concentrated, more salty. The saltier the water gets, the easier it is to float on it.

Eventually, it will become so salty that evaporation will stop.

"What we'll have left is nothing more than a little puddle," says Bromberg.

One ambitious idea to save it would build canals and pipelines to move water from the Red Sea, 120 miles away, and refill the Dead Sea.

But environmentalists worry that could also destroy it — by upsetting the mineral balance put there by nature with a $5 billion project that misses the point.

"The demise of the Dead Sea is very much connected to the conflict, the inability of the parties to sit around a table and strike that fair balance," Bromberg says. "We need peace to save the Dead Sea."

In this desert valley, that's just one more resource in short supply.