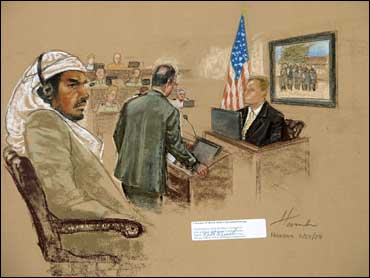 So the tiny little fish in the barrel was indeed shot. In the least surprising verdict of this or any other year, a panel of U.S. soldiers Wednesday convicted former Osama bin Laden chauffeur Salim Hamdan of supporting al Qaeda operations before and shortly after the terror attacks on America.

Prosecutors had called him an insider, someone with access to the terror brass and advanced information about their plans. Over and over again, they had used his own words against him, buttressed by the testimony of secret witnesses he was never able to fully cross-examine. And the law was squarely and brazenly on the government's side, too. You don't have to provide much support to a terror organization to be deemed a material supporter of that organization.

Hamdan's lawyers, meanwhile, had called their client a cabbie, a low-level mechanic and errand boy for the organization. They said he attend a terror camp but never was involved in any plans to kill or maim anyone, including any Americans before, on, or after Sept. 11, 2001. And their star witness was none other than Khalid Sheik Mohammed, the 9/11 mastermind, who testified in writing that Hamdan "was not fit to plan or execute" an attack. "He is fit to change trucks' tires, change oil filters, wash and clean cars," Mohammed wrote.

Hamdan was "not a soldier, he was a driver" who was only "looking for Osama bin Laden's money," Mohammed wrote in testimony read aloud by a U.S. official in open court. The cynical rantings of an arch terrorist bent on saving one of his own? Hardly. Mohammed is the fellow, you may remember, who was keen enough to realize right away that Zacarias Moussaoui (another so-called terror conspirator) was a complete whack job. Mohammed subsequently "fired" Moussaoui from Al Qaeda long before 9/11. He didn't fire Hamdan, apparently, because even Al Qaeda knows that good mechanics are always hard to find.

It is possible, even likely, that Hamdan's jury split its verdict (he was convicted of supporting terrorism but not of conspiracy) because Mohammed's testimony made more sense in many ways than the testimony of the secret witnesses called by the government or the "confessions" offered by Hamdan himself during the many, lengthy interrogation sessions. I mean, how many "masterminds" conspire with their drivers? Even Jessica Tandy never conspired with Morgan Freeman until the very end of that lousy movie -- and they were together for decades.

Indeed, it says something about the dedication and integrity of the "jurors" deliberating Hamdan's fate that it took them longer to reach their verdict than did the jurors in South Florida who last summer convicted Jose Padilla. The Padilla trial was far longer than was the Hamdan trial. The rules of evidence and jury instructions and virtually every other legal and factual aspect of the respective cases favored Padilla more than Hamdan by a longshot.

And yet our soldiers were willing to take a bit of time, reject one of their own government's theories of the case, and come back with a verdict. If that verdict ultimately falls it won't be because a judge determines down the line that jurors unfairly exercised their own independent judgment in convicting Hamdan. It will be because the entire system, the whole process, was constitutionally flawed; that the unfairness was systemic, built-in and designed to ensure convictions at all costs. If there is any cause to be proud of any aspect of this sorry affair, it is the way the "jurors," our soldiers, handled their solemn duty.

It was the first military commission proceeding since the end of World War II. But its resolution will do little to answer the legal, political and diplomatic questions that surround it. Those answers will begin to come only now, when the conviction and sentence are appealed to the civilian courts-the federal courts that routinely handle appeals in our criminal justice system. Those judges soon will begin to unwind what has just occurred down at Guantanamo Bay, Cuba, to evaluate whether any or all of it was constitutional.

For example, those appeal-court judges will have to determine whether it was constitutionally permissible to have a trial where, as the Los Angeles Times noted this week, "none of the agents nor the reports from CIA interrogations of Hamdan were available to the defense. Four prosecution witnesses testified anonymously and two Army special forces officers called by the defense were questioned behind closed doors, with no media or independent observers allowed." And those issues are just for starters.

And so a trial that changed the face of American constitutional law (and may yet do so again) ends precisely as it was designed to end by the people in power who designed the legal war on terror. With a conviction. With the White House and Pentagon boasting of the efficacy of the process. And with a model now set for the much more important trials of Mohammed and Ramzi Binalshibh, two truly bad guys. This round goes to the government in a fight that was rigged from the beginning. What happens in the next few rounds is anyone's guess.