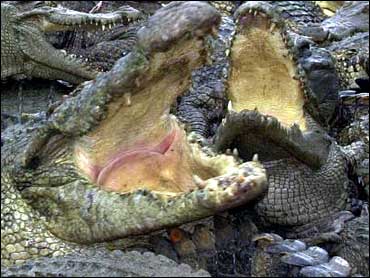 Here are related links for November. Check back regularly for updated links and additional show-related information.

Steve Irwin is known around the world as the "Crocodile Hunter."

Since he was nine years old, Irwin has had an intense love of crocodiles. It was a love so strong that he devoted his life to them. Today, as "The Croc Hunter," his hit television show is seen by hundreds of millions of viewers every day.

Steve visited The Saturday Early Show and the States to hunt for some "human" contestants for the Animal Planet's new reality series, "The Croc Hunter Challenge."

Irwin is looking for ten American contenders to live and work at Australia Zoo. Contestants will take on some of the most dangerous tasks that could include mowing crocodile enclosures, raiding croc and gator nests, rescuing wild snakes and feeding everything that bites in the zoo.

The challenger who is best able to learn and perform these tasks under the watchful, and sometimes critical eyes, will earn the title of ultimate zoo champion and win the trip of a lifetime around Australia.

Also on The Saturday Early Show, Rent-a-Husband Kaile Warren helps a Maine resident replace an old storm door to keep a chilly breeze out of the house.

For more information, go to Rent-a-Husband.com/

The best place in town in New York City is at the Sixth Annual Chocolate Show. Weatherman Dave Price went to the Metropolitan Pavilion to enjoy the display of 3,000 square feet of chocolate. He not only got a chance to eat, but also talk with pastry chef Francois Payard. Did you know the largest consumer of chocolate are the Swiss? They eat 18 lbs. per capita. "Chocolate is good for you. It's like wine," says Payard. So if you are in New York City, get some tickets and visit the show. For more information, go to chocolateshow.com.

A beautiful bald eagle named Challenger has been raised in captivity for most of his life. He was saved by the people at the American Eagle Foundation in Dollywood in Pigeon Forge, Tenn. The non-profit group's president, Al Cecere says the bald eagle is still an endangered species, so he encourages people to support the fund.

For more information about bald eagles, go to Eagles.org

Since the nation learned she was missing in action and her subsequent rescue, Jessica Lynch has become an iconic symbol of the Iraqi war.

In an exclusive interview with Time magazine, on newsstands Monday, Nov. 10, Lynch recounts what she remembers of the ambush and capture as well as her rehabilitation and long road to recovery. The magazine also includes excerpts from Rick Bragg's book, "I Am A Solider Too: The Jessica Lynch Story," due out this week.

For More Information on Time Magazine's Interview with Jessica Lynch, go to Time.com

Weatherman Dave Price talked with Ginny Busch about the importance of conservation and helped viewers understand how they can help protect the fragile animals and their ecosystems.

Tuesday, Nov. 4, 2003
The hottest ticket in New York these days is to a new exhibit at the Metropolitan Museum of Art. It's not a view into the tombs of Egyptian pharos, or a collection of Impressionist master works. No, this exhibit's all about skirts, specifically, men in skirts.

Associate Curator Andrew Bolton says, "The inspiration came from this man on the subway in London wearing a skirt and also seeing people's reactions to him, which was either very extreme or very lukewarm, but everyone had a reaction to the man in this skirt. And I thought, it's still one of the taboos of fashion."

Braveharts: Men in Skirts can be seen at The Metropolitan Museum of Art in Manhattan through Feb. 8.