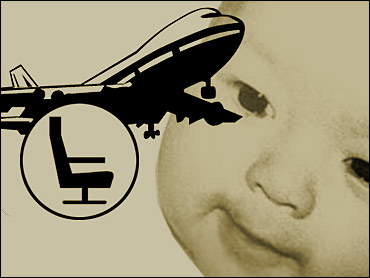 Are small children at risk of being hurt on airplanes? The National Transportation Safety Board says yes, and it's calling for change.

Here's the rule: Children under 2 can fly for free if they sit on their parents' laps. Plenty of parents do it, because it's cheaper. But some are learning the hard way: It can be dangerous.

Terra Converse was flying from Dallas to Salt Lake City, her 6-month-old baby, Jake, on her lap.

"That was so hard, not being able to protect him," she says. "I was scared to death; he left my arms; I thought we were all going to die."

The jet suddenly hit turbulence and dropped more than 300 feet.

"The plane just fell," she says.

Jake was ripped from her arms and slammed into the overhead compartment, pinned there as the plane plunged.

"It was scary," Converse says. "I was buckled in and I couldn't reach him."

Converse, like many parents, was flying with her baby on her lap to save money. She didn't want to pay for a second seat.

This year, more than 4.5 million young children will fly on airplanes. While the FAA requires carry-on luggage to be stored, and you to buckle up, kids under 2 can sit on their parents' laps for free, unbelted and unrestrained.

And that's dangerous, says the National Transportation Safety Board. It wants parents to be required to buy seats for their babies and buckle them up in safety seats.

Former flight attendant Jan Lohr says, "We're protecting laptop computers that must be put away, but we're not protecting a small child? This, to me, is abominable; it's unconscionable."

Lohr has seen lap children thrown from their mothers' arms. She's on a mission to make sure buckling up small kids is not an option, but the rule.

Lohr says, "If the FAA says that a parent can hold a child and fly them for free if they're seated on their lap, then it follows that the parent would think that it's safe to do so, and it isn't."

The FAA agrees: Children are safer if they're strapped in. But it's not ready to make it a rule. The fear is that if parents are required to buy tickets for their babies, they'll opt to drive instead, something the FAA says is more dangerous than flying.

But buying that extra seat may be less expensive than parents fear. Many airlines offer discounts on tickets for children using safety seats. Eight years after her close call, Terra Converse regrets not spending the money on a seat for her son.

"How much is your child worth?" Converse asks. "I still feel guilty that I did that to him. Your children are priceless."

If you don't want to sit with your baby on your lap the next time you fly, call to see if your airline offers a discount if you buy your baby a seat.

And check your baby's safety seat. Make sure the label says it's certified for use on planes. Measure your car seat. Then, ask the airline if it's going to fit.