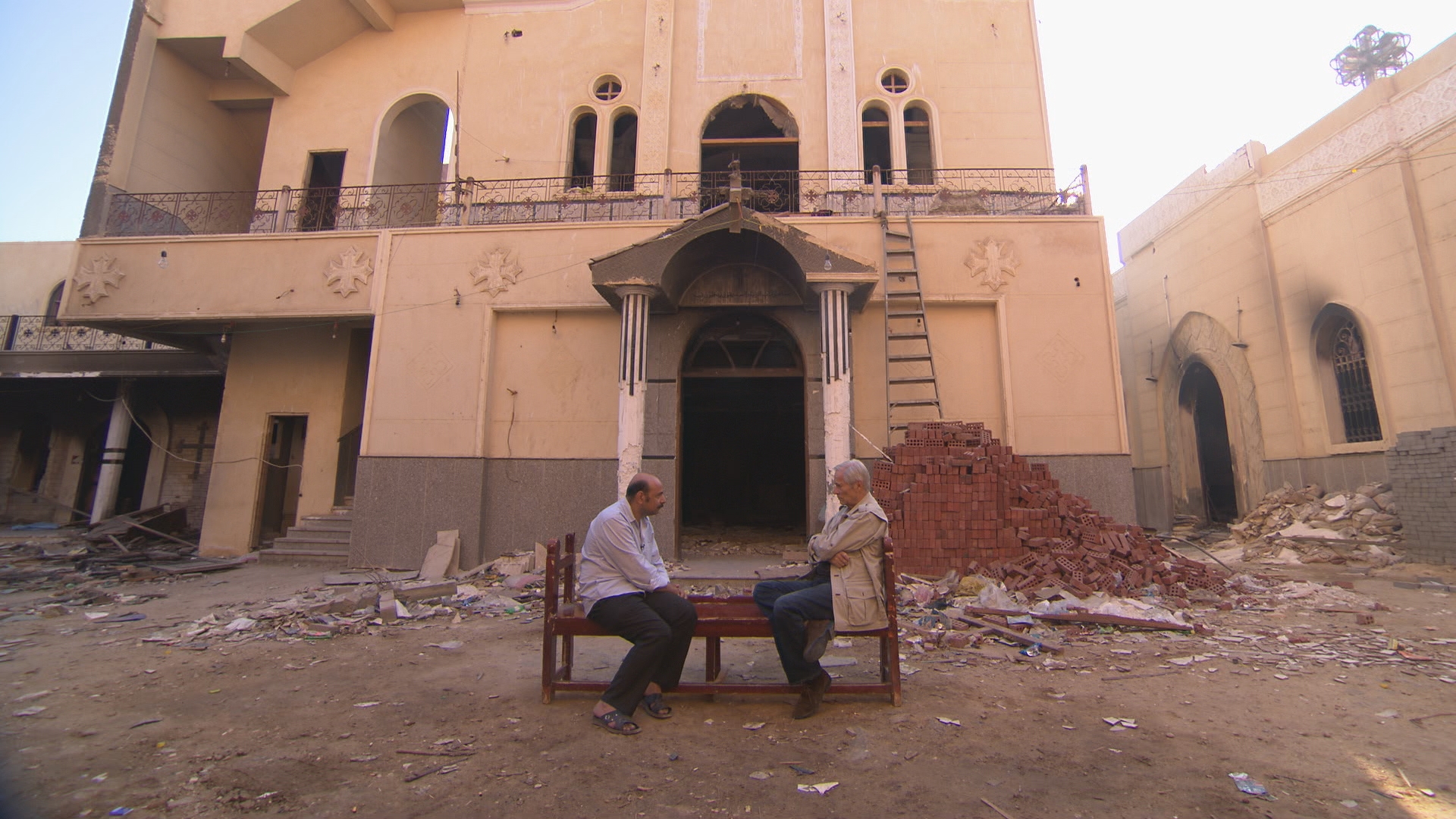 The following is a script from "The Copts" which aired on Dec. 15, 2013. Bob Simon is the correspondent. Harry Radliffe, producer.

Think of Egypt and the first thing that comes to mind is not Christianity. But Egypt is home to the Copts, one of the world’s oldest Christian communities, with roots dating back to the time of Christ himself. Back then, the word “Copt” meant, simply, “Egypt”. But after the advent of Islam, it came to mean “the Christians of Egypt” and the name has stuck.

Copts have never had it easy there. They’ve been persecuted and discriminated against by the Muslim majority for centuries. They’d hoped the Egyptian revolution would change that. But it hasn’t. Instead, the last year has been one of their worst ever. Copts have been murdered by Islamic extremists.  Dozens of their churches have been gutted.  But we’re going to begin our story before the onset of these horrors -- with a Coptic rite we witnessed, one of the most unusual events in all Christianity.

Like the Greeks and the Russians, Copts are Orthodox Christians, but they have one thing in common with the Roman Catholics: they elect a pope.

And in Egypt, it’s a public ceremony. It all happens in Cairo’s grand cathedral. This was the first papal election in 41 years and Copts from all over Egypt had come for what was likely to be a once-in-a-lifetime experience.

It’s the last step in a process that has narrowed the candidates for pope down to three. But the final choice is made by a boy who is blindfolded and led to a crystal chalice containing the three names. The name on the piece of paper the boy picks becomes the next pope of Coptic Christians. They believe his choice is not a roll of the dice, but is inspired by the divine.

When the name is read out, pandemonium reigns. The new pope – called Tawadros II - is a 61-year-old pharmacist turned monk - and the 118th pope in a line stretching back to the 1st century.

Bob Simon: Now in the Roman Catholic Church a pope is elected as you know by secret ballot behind closed doors. And you are selected by a boy –

Bob Simon: -- putting his hand in a box. How did that come to pass?

Pope Tawadros II: This is a tradition in the Coptic Church, choosing the Pope through a boy because the boy is the symbol of purity.

Purity and a young child. The association is as old as Christianity itself. Copts believe that the baby Jesus came to Cairo – that his life was saved here

"This is a tradition in the Coptic Church, choosing the Pope through a boy because the boy is the symbol of purity."

Febe Armanios, an expert on Copts from Middlebury College, took us down to the underground chapel of the Abu Serga Church, where the pastor, Father Angelos Shenouda, showed us where the Holy Family sought refuge from King Herod after their flight into Egypt.

Febe Armanios: Local traditions say that they lived here, that the Virgin Mary may have even bathed the baby Jesus in that spot there. That you can hear His voice in this room-- that he breathed in this room. All of this is part of that memory.

That’s why Christians from all over Egypt come to Coptic Cairo to pray. To them, the Abu Serga church is as sacred as the Church of the Nativity in Bethlehem or the Holy Sepulcher in Jerusalem. But while foreigners used to flock to Egypt to see what the pharaohs left behind -- very few came here -- or even knew about Egypt’s Christian past.

Febe Armanios: I don't think there's a lot of awareness of Egypt's role in the Christian story. It’s a forgotten community as many people have called it.

Bob Simon: Are Coptics a little bit upset about that?

Febe Armanios: I think they would be eager -- to share their stories. They want to share this story with the world.

They want people to know that Christianity has deep roots in Egypt – in places like the Eastern Desert next to the Red Sea. We visited St. Anthony’s, the first Christian monastery in the world. Father Maximous el-Antony has been a monk here for 35 years.

Bob Simon: Now I think most people think that the monastic tradition began in what we call the Holy Land, Israel, Palestine?

Bob Simon: But it began here?

Father Maximous: Yes, it began here of course in Egypt.

It began in these mountains, 450 feet above the sands. The monks believe it was in that tiny cave that St. Anthony, the first Christian monk, followed God’s instructions to seclude himself in the desert. Every night around midnight, monks and novices climb through the darkness to pray here and honor his memory. It was very crowded and very cold.

The monks believe that St. Anthony’s remains are buried near here and they’ve been searching for them for centuries. Ten years ago, when they probed beneath the monastery’s floor they made an amazing discovery…what are believed to be the oldest monk cells in Christianity – dating from the fourth century.

Bob Simon: And there was no church?

Father Maximous: No church, no cells, no walls, nothing.

From nothing - the Copts developed a religious culture that’s distinctly Egyptian – everything from music to art to some of the most magnificent churches of the early Christian era. Scholars have called the Red Monastery “the Coptic Sistine chapel.” Its walls are covered with paintings of the church’s prophets, saints and martyrs.

Today, the traditions that were planted in the desert 16 hundred years ago have hardly changed. The estimated eight and a half million Copts form the largest Christian community in the Middle East -- but in Egypt they are a distinct minority -- 10 percent of the population.

By late June, the economy was a shambles. Millions of Egyptians took to the streets demanding that Morsi leave. On July 3rd, Egypt’s army leader, General el-Sissi, announced a military coup on national TV. Lending him their support -- civil, military, and religious leaders, including Pope Tawadros II.

Bob Simon: Wasn't the mere fact that the Pope's picture was taken next to General Sissi—

Bob Simon: -- to incite the Brotherhood?

Heba Morayef, who heads Human Rights Watch in Egypt, says the pope’s support of the military was denounced at Muslim Brotherhood rallies which often blamed Christians for conspiring to overthrow Morsi.

Bob Simon: When you talk about anti-Christian dialogue, what are you referring to specifically?

Heba Morayef: Accusations that Christians were responsible for the coup. Chants that would call Christians the Pope's dogs.

It all came to an abrupt end on August 14th – when the army crushed two huge Muslim Brotherhood encampments. Close to a thousand protestors were killed.

Heba Morayef: The dispersal of the two sit-ins on August 14th were the most bloody incidents of police violence we've ever seen in Egypt.

As word of the killings spread all across Egypt, Muslim mobs began attacking Christian churches. This cell phone video shows one surrounding the Coptic church in Sohag -- 245 miles south of Cairo -- battering their way in, setting it on fire. It took a while to destroy the cross but when it finally came down, the crowd began shouting “God is great.” Over the next two days, devastation like this was visited on more than 40 churches.

Youssef Sidhom: We never expected that they will turn so fierce and vicious in their attacks.

Youssef Sidhom is the editor of Egypt’s most important Coptic newspaper.

Bob Simon: Well, how did you explain it? I mean, why was there such violence?

Youssef Sidhom: They were furious about the Copts and they wanted really to punish them for that.

And right outside Cairo in a town called Kerdasa, a mob broke down the gate of another Coptic church complex. Redha Girgis, a caretaker, was there.

"We never expected that they will turn so fierce and vicious in their attacks."

Redha Girgis: They looted everything from chairs to pews. They stole anything that could be carried, what they couldn’t carry, they destroyed.

Bob Simon: How did they set the church on fire?

Redha Girgis: They set the whole place on fire, with Molotov cocktails and gasoline.

And, on their way out, the attackers left behind a calling card:  graffiti saying that Egypt is Islamic.

The whole complex was gutted. Everything was incinerated: pews, paintings, Bibles.

The Copts had supported the overthrow of Muslim Brotherhood rule, were overjoyed when the army took over. But when they saw their churches in flames, they realized they were paying a price for siding with the military and that they were on their own. No one was going to help them.

But martyrdom has always been at the core of the Coptic religion.  Suffering, Copts believe, deepens their faith. The day we were in Kerdasa – they held a service in the only place that hadn’t been destroyed. But we were surprised there was no anger, no call for revenge.

Bishop Thomas, one of the church’s senior clerics, says whatever pain Copts are suffering, they must turn the other cheek, at least for now.

Bishop Thomas: Forgiveness is a very important principle in the Christian life. When you are able to present forgiveness and love, you are able as well to ask for justice. One day in this life, justice has to be fulfilled.

One day, perhaps. But it’s not happening now. Four Copts, including two children, were killed recently when masked gunmen shot them as they arrived for a wedding. Thousands attended the funeral for the church’s latest martyrs.

Pope Tawadros II: In every period, we must present some martyrs.

Bob Simon: So you think that Christianity in Egypt requires martyrs today as it has in the past?

Febe Armanios believes the violence is one reason people are flocking to charismatic Coptic services. She took us to one at St. Simon in Muquattam in Cairo – one of the largest churches in the Middle East. Two thousand people attended the night we went and the service was broadcast all over the country. It went on for three hours and ended like no other we had ever seen -- with public exorcisms.

Bob Simon: Have you ever seen anything like this?

Febe Armanios: I've attended some of these ceremonies in this church before.

They find support in their own history. In a rite of passage unique among Christian churches, the cross is tattooed on children’s wrists. It hurts a little but the pain doesn’t last. It’s a tradition that dates back to the Middle Ages - when Muslims forced Copts to wear the cross as a sign of identity. Today they wear it as a sign of pride.