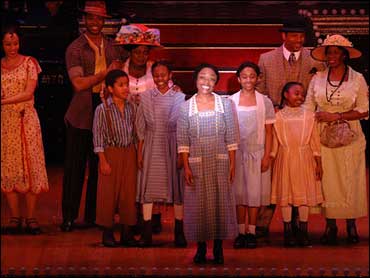 The Great White Way is a bit more multihued these days. And it all begins with "The Color Purple."

Audiences for the Tony Award-nominated play, on view at the 1,718-seat Broadway Theatre, are evenly divided between blacks and whites — an anomaly in a business where four out of five customers are white.

This redefinition of the Broadway crowd comes as the musical, which boasts Oprah Winfrey as its biggest booster, collected 11 Tony nominations and announced plans for a national tour beginning in April 2007. Only "The Drowsy Chaperone," with 13 nominations, fared better heading into the race for theater's top prize on June 11.

"We felt strongly that we had a unique opportunity to do something Broadway rarely does: to bring African Americans to the theater," said Scott Sanders, the show's producer. "We knew if we told the story honestly and truthfully, we really had an opportunity to do that."

On a recent night at the theater, the audience filters inside: a mix of blacks and whites, kids in hoodies and older folks in suits and ties, kente cloth alongside leather jackets. Four middle-aged black women settle into their row as a young man in an oversized football jersey with a "Puerto Rico" logo looks for his seat.

The crowd contradicts the statistics complied by the League of American Theatres and Producers, Inc., between June 2004 and June 2005. Of the 11.53 million tickets sold over those 12 months, only 3.8 percent were purchased by blacks. Latinos accounted for 5.7 percent.

Those numbers sound right outside the Gershwin Theater, where a largely white crowd gathers before the night's performance of "Wicked." One block away, at the theater named for playwright August Wilson, the same demographic heads inside to see "Jersey Boys."

Things are different at "The Color Purple."

Marcia Pendleton, whose Walk Tall Girl Productions deals in part with drawing more diverse crowds to the theater, said the success of "The Color Purple" in attracting more blacks owes to the plays of Wilson, along with earlier Broadway shows featuring Denzel Washington, Sean "Diddy" Combs and Savion Glover.

"None of what's happening on Broadway now is happening in a vacuum," she said.

Despite mixed reviews, "The Color Purple" has become a bit of the people's choice on Broadway. Intense word-of-mouth has fueled its success, along with the backing of Winfrey, who captured an Academy Award nomination for her role as Sofia in Steven Spielberg's film adaptation of Alice Walker's Pulitzer Prize-winning book.

"That was huge," said Pendleton of Winfrey's support. "She transcends everything."

Sanders is quick to credit Winfrey's role in getting the word out about a play that delves into incest, rape, child abuse and domestic violence in its tale of a rural Georgia girl's troubled but ultimately triumphant life.

Shortly before the show's December debut, Sanders received a call from Winfrey about the production. She quickly offered her help, and Sanders just as quickly laid out a scenario for Oprah's assistance.

"I told her, 'You get your viewers to read Faulkner and the classics. You can do the same thing for us,'" Sanders recalled. "If she could get people to come to the theater, it would be great for 'The Color Purple' and for Broadway.

"When she gave us the national exposure, it helped trigger the audiences."

Five months after its opening, "The Color Purple" was grossing more than $1 million a week, making it one of the top five shows on Broadway. The show's backers should recoup their $11 million investment in less than a year.

Jed Bernstein, head of the League of American Theatres and Producers, said that a growing black audience was a good sign for Broadway. While the 3.8 percent figure was low, it was an increase of 12 percent from the year before, he said.

"We're moving in the right direction," Bernstein said. "This at least suggests producers are more and more aware that in order to have successful productions, they have to appeal to as broad an audience as possible."