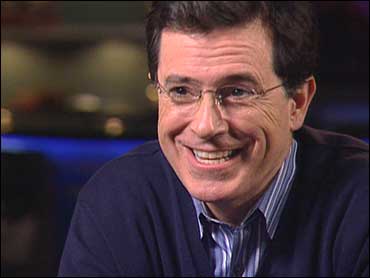 For the best part of six years, President Bush has endured tough treatment from the late night comedians. But this past April, he had to grin and bear it as Stephen Colbert ripped into him from just a few feet away at the White House Correspondents' Dinner.

But the main targets of this practitioner of fake news are the talking - rather shouting heads - who populate cable with a diet of often wildly inaccurate but patriotic and combative noise. It was only a matter of time before someone came along to skewer them. As correspondent Morley Safer first reported last spring, the eagle has landed.

"Even the weather page is in a state of moral decay. What's wrong with red, white and blue, USA Today? This rainbow weather map is just another example of the homometerological agenda," Colbert tells his audience.

If there is such a thing, he is your humble egomaniac. On his first broadcast, Colbert announced, "...This show is not about me. No, this program is dedicated to you, the heroes. And who are the heroes? The people who watch this show, average hard-working Americans. You're not the elites. You're not the country club crowd. I know for a fact my country club would never let you in. You're the folks who say something has to be done. And you're doing something. You're watching TV."

Colbert defines his no-nonsense philosophy with a single word: "truthiness."

"Truthiness. Now I'm sure some of the word police -- the wordinistas -- over at Webster's are going to say, 'Hey, that's not a word.' Well, anybody who knows me knows that I'm no fan of dictionaries. Or reference books. They're elitist," Colbert jokes.

"But it's certainly not exclusive to the Colbert Report," Safer remarked.

"Government. What's been coming out of politicians for a couple of hundred years," Safer said.

"Right," Colbert replied. "I don't think it's a new thing I'm describing, but I think we're getting better at it."

On one episode, Colbert gave an example: "Consider Harriet Miers. If you think about Harriet Miers, of course, her nomination is absurd. The president didn't say he thought about his selection. He said this: 'I know her heart.' Notice he said nothing about her brains. He didn't have to. He feels the truth about Harriet Miers. And what about Iraq? If you think about it, maybe there a few missing pieces to the rationale for war, but doesn't taking Saddam out feel like the right thing here?"

Asked whether the character he plays is smart, proud or stupid, Colbert says, "I think of him as a well-intentioned, poorly informed, high-status idiot."

He may be the last defense against Hollywood liberals like Tim Robbins, who was a guest on the show.

"What's it like working with Clint Eastwood, and why do you hate our troops? I mean, what was your favorite project you've ever worked on, and would you rather have Saddam in power?" Colbert jokingly asked Robbins.

Colbert looks to the very fount of truthiness for inspiration: Bill O'Reilly.

"Apart from the substance which you in a sense borrow from these guys, what about mannerisms?" Safer asked.

"Volume is very important," Colbert answered. "The only real way to tell your audience what's important is what you say loudest. I can say it up here. Or I could say it down here. But I will cut off your mic, Sir. Get, shut up. Shut up, Safer," he joked in character.

Skewering the media and politicians of every stripe is nothing new for Colbert. For five years, he was a correspondent on Jon Stewart's "The Daily Show."

Colbert says he modeled his character on "The Daily Show" on Stone Phillips, "because he's the perfect, manly newsman package."

Phillips also has a perfect name, according to Colbert. "Stone. Shale. Bedrock. Gypsum. And he's got this fantastic neck and he uses it to assure people."

Getting to be the star of his own show has taken Colbert almost two decades. He started with Chicago's "Second City" improv troupe, and worked for "Saturday Night Live" and several cable comedy shows. He had one stint as a real reporter for ABC's "Good Morning America" -- a one-story career.

Colbert's real life is as unglamorous as it gets. He's married with three children and works very long days. Fake news is serious business, and it takes a staff of 80 to cover the realm of truthiness.

Colbert writes a lot of what goes on the air and fine tunes everything. He acknowledges he has the great advantage of using every dirty trick in terms of editing, something which Safer says traditional news programs are deprived of.

"So you're not going to use any dirty tricks in this interview. At no point am I going to be misquoted or edited to say one thing to a different question?" Colbert asked Safer.

"Really, you really ought to try it. It saves you a lot of work," Colbert joked.

When 60 Minutes visited, Colbert was reviewing a piece to air that night -- an interview with the congressional delegate from the Virgin Islands, Donna Christiansen.

"Isn't it time to drop the whole virgin act?" Colbert asked Christiansen in his interview.

"What would else would we call ourselves?" she asked.

"Trollop Island? ... The Been Around The Block Islands? ...The Not Until The Third Date Islands?" Colbert joked.

"Can we just leave it at Virgin Islands?" she replied.

The interview with Christiansen is one of a 435-part series, with every member of the House of Representatives. Colbert discovered that a camera, any camera, even his camera, is irresistible to men and women seeking re-election every two years. His questions are totally off the wall, as John Mica of Florida discovered.

"Do you have to take your toupee off when you go through security?" Colbert asked the congressman.

Stephanie Tubbs-Jones of Ohio got a taste of Colbert's brand of humor, when Colbert asked her, "Twenty-two astronauts were born in Ohio. What is it about your state that makes people want to flee the earth?"

Colbert has been going for laughs since he was a child, growing up near Charleston, S.C., in a large very family. He is the youngest of 11 kids.

Despite coming from Charleston, Colbert does not have a trace of a southern accent.

"At a very young age, I decided I was not gonna have a southern accent. Because people, when I was a kid watching TV, if you wanted to use a shorthand that someone was stupid, you gave the character a southern accent. And that's not true. Southern people are not stupid. But I didn't wanna seem stupid. I wanted to seem smart. And so I thought, 'Well, you can't tell where newsmen are from,'" Colbert explains.

He admits he has what Gary Trudeau called the "boring baritone."

"I have a boring baritone; I have boring hair. Every decision that I've made in my life is the middle decision," he tells Safer.

"You sort of disappear," Safer remarked.

"I hope so. I'm a manila envelope," Colbert replied.

"It has been said, I don't know if it's any truth to it, that all good comedians have some painful experience in their in their lives. Any truth to that thesis, do you think?" Safer asked.

"Sure," Colbert replied. "My father and two of my brothers died when I was 10. I think I did my best to cheer my mom up."

The three were killed in 1974 in an Eastern Airlines crash.

Asked if the tragedy still affects his life, Colbert says, "I know that after they died, nothing, I was 10, you know? I was still in school. It was in elementary school. But nothing seemed that important to me. And so, I had immediately had sort of a, I won't say a cynical detachment from the world. But I would certainly say I was detached from what was normal behavior of children around me. It didn't make much sense. None of it seemed very important. And I think that, you know, feeds into a sense that acceptance, or blind acceptance of authority, is not easy for me."

At home, Colbert is a doting father who makes sure his kids do not see the other Colbert -- he only rarely let his kids watch the show.

"It's just like a pure silly thing. But you know, I truck in insincerity. With a very straight face, I say things I don't believe," Colbert tells Safer.

"Kids can't understand irony or sarcasm, and I don't want them to perceive me as insincere," Colbert says, "Because one night, I'll be putting them to bed and I'll say ... 'I love you, honey.' And they'll say, 'I get it. Very dry, Dad. That's good stuff,'" jokes Colbert.

Meantime, insincerity is paying big dividends and playing to more than a million people a night.

"Is there any possibility of the danger of you starting to believe yourself?" Safer asked.

"I hope so," Colbert replied. "I think that's the only hope that I'll actually do this job right -- if I begin to believe my own line of crap."

Amazon is the world's largest online retailer, serving 225M customers. What's next for the company that prides itself on disrupting tradition?