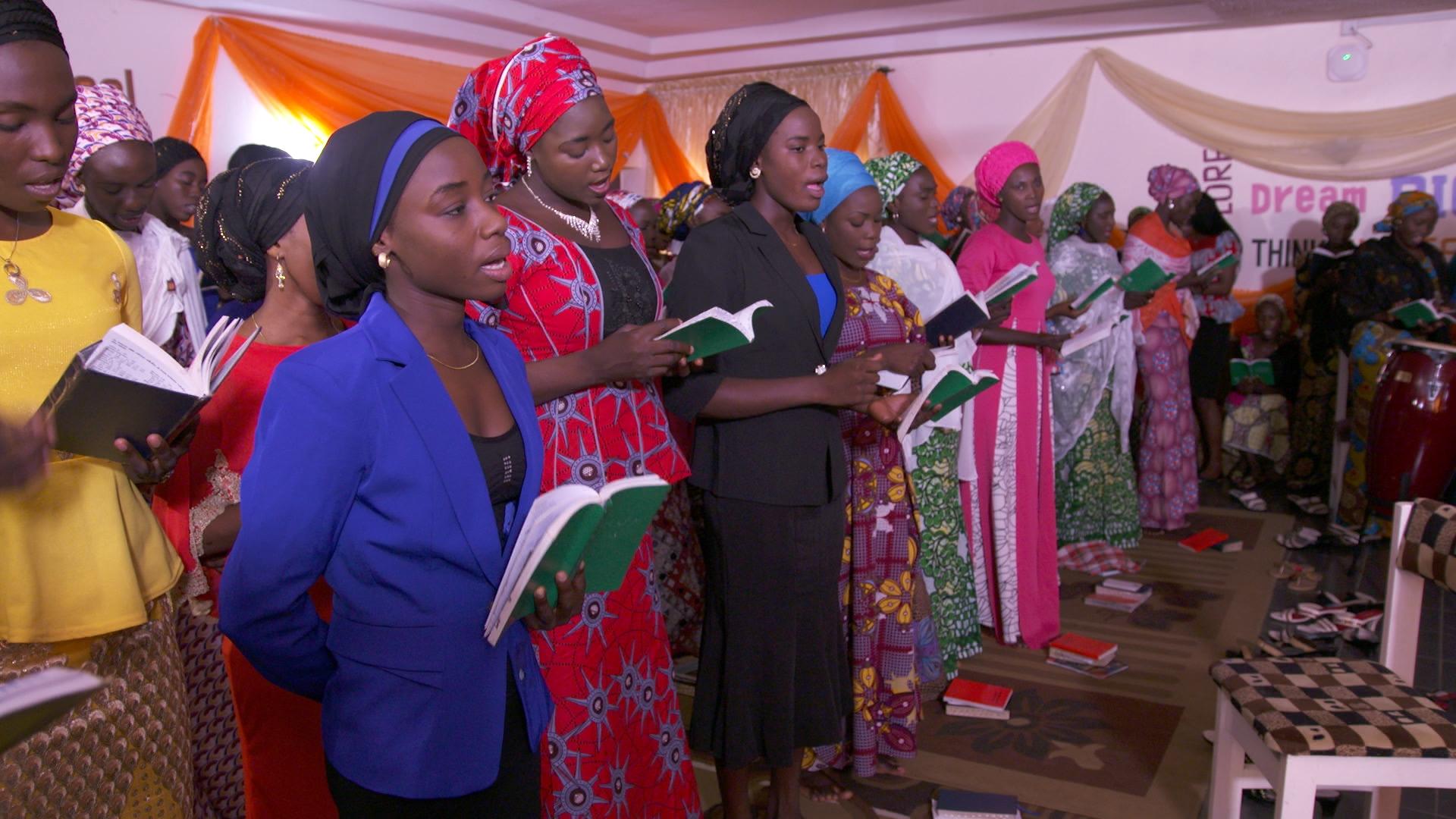 Imagine your teenage daughter was kidnapped while studying for her exams at school. And not just your daughter, but hundreds of girls in your town taken in the night. The families of Chibok, Nigeria lived through that nightmare almost five years ago when the Islamic terrorist group Boko Haram - whose name roughly translates to "western education is forbidden" - attacked a local school and ran off with 276 girls. Some escaped, but it took the Nigerian government three years to negotiate the release of fewer than half of them.

Since their release, the Chibok girls, as they're known, have been largely hidden from the public. But we were able to meet with them at a kind of prep school to hear their remarkable story of survival.

This is a hostage video released by Boko Haram from their hide-out in the Sambisa Forest, one month after the kidnapping.

The Chibok girls are all covered, chanting verses from the Quran.

They were facing a life of misery with beatings and starvation.

But now at the New Foundation School on the campus of the American University of Nigeria, the girls are singing again.

This time it's the Christian songs they grew up with.

Rebecca: We are the Chibok girls that have been in captivities and now we are alive.

Getting out alive and singing hymns, things Rebecca feared might never happen.

Lesley Stahl: Did they let you sing when you were in captivity?

Rebecca: No. We are singing in private—

Rebecca: They won't allow us to sing like that.

Lesley Stahl: So you had to whisper sing?

For Rebecca and her friends, just singing out loud today is a gift, after their three years of living in fear and pressure to become Muslims.

Lesley Stahl: So if you didn't convert to Islam, were you punished for not converting?

Rebecca: Yes, they say if you didn't convert to Islam you wouldn't get home alive. That's what they say.

Here are some of the girls two years ago right after they were released, alive but looking like concentration camp survivors, haunted and numb.  This is Rebecca, skin and bones.

Lesley Stahl: I heard you were eating grass.

Rebecca: Yeah. Some of us eat that. And we are just be patient and live like that. No food. No anything.

Look at them today, in their 20s. They're healthy and full of spirit at a school created just for them, paid for by the Nigerian government and some donors, where they are making up for lost time.

They're from Northern Nigeria, where life can be hard and opportunities for women are limited. Now, in their Wi-Fi-equipped dorms, they have smart phones, and lap tops and their own beds.

They go back to Chibok to see their parents twice a year; over Christmas and during the summer.

Otherwise, they work hard here, going to class six days a week, studying subjects like biology and math. Working toward getting into the university, which would for them be free of charge.

Most of the girls we spoke to were shy. And reticent as they told us that their tight bond, going back to Chibok, helped them survive. When Grace's leg was injured the night of the kidnapping, her "sisters," as she calls them, Ayesha and Maryam and others pulled her through.

Grace: They are taking care of me. They are fetching water. They are washing me, my clothes, and everything.

Ayeisha: We are worried about her leg. We don't have anybody there that will take care of her. Only us.

Lesley Stahl: You helped each other, sick, or unhappy, or scared, you were a unit.

Somiari Demm: They just had an unbelievable bond, and an attachment to each other.

Somiari Demm is the girls' therapist, on call 24/7.  Born in Nigeria, raised and educated in the states, she has been with this group since they arrived over a year ago.

Lesley Stahl: Can you tell us what their experiences were like generally?

Somiari Demm: Just a lot of the stuff, the starvation…

Somiari Demm: Eating grass, exactly, the beatings,-- being forced to get married. At some point in time, you know, the bomb, the air strikes. So these are some of things that were reoccurring events.

Lesley Stahl: You were actually hit.

The air strikes started as the Nigerian government pursued and attacked Boko Haram.

Lesley Stahl: A bomb dropped where you were being held.

Rebecca: They mistakenly throw the bomb.

Lesley Stahl: And you were injured?

Rebecca: With some particles.

Rebecca: Yeah and it's still inside my body. It has not been removed.

Because the shrapnel is in her liver, she's in pain. But she perserveres at school.

Lesley Stahl: You were kidnapped because you went to school. Now you're back in school. Do you feel like you're doing something courageous?

Rebecca: Even what happened with me will not stop me doing what I already desire in my mind.

Reginald Braggs, an American, has also been at the New Foundation School since its start.

Lesley Stahl: What is the biggest challenge for you in this program?

Reginald Braggs: You know, it really is trying to help the students to meet their goal of getting into the university. And part of that challenge is their English language proficiency. So I had this idea, I said let's do an old-fashioned, American spelling bee with these guys.

Sometimes one of them struggles, over even an easy word like poor...

...and is embarrassed. But when someone like rebecca gets a hard word right…

Reginald Braggs: It's amazing how their confidence grows after this.

Lesley Stahl: But do you think there's a lot of pressure on them in the spelling bee?

Reginald Braggs: Of course. This is about education for them, and knowing that they can do something.  And it's always better when you have someone who is confident and they're doing something and the other students are observing them. If they can do it, you can do it.

It's not as easy as having a can-do attitude for these girls, says Demm. She thinks they're being pushed too hard and that the curriculum is too rigourous.

Somiari Demm: I think at times, we need to kinda scale it back. Trauma really changes the brain whether memory, cognition, recall, retrieval. We have to meet them where they are. If not, all we're doing is making the situation worse.

We were told they still get flashbacks and night terrors. And it doesn't help that over 100 of their friends are still missing.

Lesley Stahl: Do you think about the ones who are still in captivity?

Grace: When I think about them, I'm crying. And, I know that place. I know the condition. I don't want my sisters to stay there. I want them to come out.

Demm is using an array of theraputic treatments to help them heal.

She leads them in yoga and relaxation exercises. And provides individual and group therapy where most of the girls have had difficulty talking about the suffering they endured.

Lesley Stahl: Can you tell us just a little bit about what life was like in captivity.

Lesley Stahl: Is it too hard to talk about?

Rebecca: Yeah, because I don't want to remember some things. When I tried, maybe I will feel like crying like that.

The idea here is that the trauma happened in a group, so it's good to do the healing in a group.

Demm says she never pushes the girls to open up. So, for instance, she doesn't know how many were raped. But she says there's a fine line between rape and forced marriage.

Lesley Stahl: You got married?

Maryam wasn't forced to convert, she was already Muslim so she was quickly married off to a Boko Haram commander and got pregnant.

Lesley Stahl: You gave birth there in the forest?

She said the birth was difficult, but her son, Ali, was healthy. After two years, her Boko Haram husband actually helped her and Ali escape.

Lesley Stahl: Do you feel still that you're married

And Ali, now two and a half. Where is he? He's in Chibok with his grandparents. The New Foundation School decided babies wouldn't be allowed on campus.

Lesley Stahl: Would you like it if they let you have the baby here?

Maryam: Yes, I like it. But, you know, it can't be possible to carry Ali here.

Lesley Stahl: What does he call you?

She's been separated from her son for so long he doesn't recognize her as his mother. As a child of Boko Haram, Ali is likely to face difficult odds, but Maryam feels that with a good education she can ease the way for him.

The Nigerian government is paying for most of their schooling. But thousands of other women and girls who were kidnapped by Boko Haram are languishing with other victims in government-run camps like this one we found just 30 minutes from the school.

The contrast with the Chibok girls at the New Foundation School is glaring. But their free  education comes with the burden of great expectations. The school's walls are plastered with sayings like: there's no limit to what I can achieve; their dorms are named after successful women like Michelle Obama and Malala.

Lesley Stahl: Do you feel that because you're getting this wonderful education free, that you need to give something back to your country?

Grace: If I work hard and if I become something, it's not only this Nigeria, I will help many countries.

Grace: Yes! Maybe I will do more than her. (LAUGH)

Dawn Dekle, president of the American University of Nigeria, says the New Foundation School is grooming these young women to "give back" by becoming leaders.

It is ironic that their worst experience – has led to opportunities beyond their wildest dreams. They're not completely healed. But every day they get stronger physically, mentally, emotionally, and...

Somiari Demm: Despite everything that they've been through, they push forward. They come back even with greater force, with greater determination. And  they blow me away.

The rollback of free market policies in China
Lesley Stahl