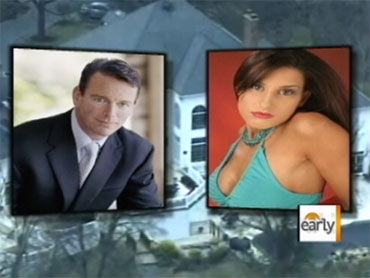 Investigators continue to seek answers about the mysterious death of the girlfriend of August Busch IV, heir to his family's beer fortune.

And, reports CBS News Correspondent Bill Whitaker, the death has brought renewed focus on the billionaire's checkered past.

Busch IV has remained silent in the eight days since his 27-year-old girlfriend, sometime model Adrienne Martin, was found dead in his St. Louis mansion.

And details surrounding the case are only deepening the mystery.

Details such as what police say was a 40-minute gap between the time Martin's body was discovered and a call was made to 911 by a household employee.

"Forty minutes may be absolutely nothing, or it could be something else," Nick Pistor, a reporter for the St. Louis Post-Dispatch, told CBS News. "Maybe he was calling other people. We just don't know."

Another detail: Martin's ex-husband, a physician, says she had a heart condition that causes an erratic heart rate.

Friends believe it's unlikely she suffered an overdose, Whitaker points out.

"She was against drugs," Pistor says. "Her former employer told me, sort of indicating it would be hard to believe that she would have overdosed."

That, Whitaker notes, has focused attention back on the tumultuous past of the 46-year-old Busch, known simply as "The Fourth."

Described as a "risk-taker" with a passion for fast cars, Busch has had numerous run-ins with the law.

As a college student, he allegedly left the scene of a car crash that killed a 22 year old woman. Eight hours later, he was found disoriented, with blood still on him, but charges were dropped after evidence was lost.

"Shortly after his incident in the '80s in Arizona, Pistor says, Busch was in St. Louis and he was in a car chase with police. He refused to pull over, they shot out one of his tires, and ultimately ended up changing it for him when they realized who he was."

Sightings of Busch have been rare in the two years since his family sold the company to the Belgian giant InBev - now known as Anheuser-Busch InBev - in a 2008 deal worth $52 billion.

Friends of Adrienne Martin say she and Busch had a "healthy" relationship, and she was looking for a better life for her 8-year-old son.

Toxicology reports on Martin are expected to take 4-6 weeks.

"I think one of the most defining things in his life, in his history has been his really difficult relationship with his father, August Busch III. And that's something that has made his life incredibly tumultuous," Julie MacIntosh, author of "Dethroning the King: The Hostile Takeover of Anheuser-Busch, an American Icon" told Mitchell. "He didn't spend much time with his dad, ever, except for when they were at the office. And his father has been very stingy with giving praise. And it's been something that 'The Fourth' has always longed for -- acceptance from his father. And it's not clear whether he ever really got that, even as CEO of Anheuser-Busch."

In his youth, Busch had a playboy image, Mitchell observed.

"I wouldn't say he embraced (the image) necessarily," MacIntosh remarked. "But it isn't clear that he really tried to turn the coin and do something else, either. People really lobbied for him to change that image, especially on Anheuser-Busch's board. They felt it was much more responsible, at least from appearance's sake, if he kind of tamed that a little bit. But as we can see, he's still dating a 27-year-old. There's a little bit of a May/December romance going on there. And, the other -- the counterargument is he's no longer working for the company. He can essentially do whatever he'd like."

The takeover of the family business hit Busch hard, MacIntosh says. "He told the distributors of Anheuser-Busch beer, just a few months before the company was taken over, that it would never be taken over on his watch. So, he felt that he violated a level of trust he had with the company's employees and distributors by promising it wouldn't get taken over and then allowing it to happen. So I know it was really difficult for him, after the deal, to accept that he wasn't able to live up to his promise.

"But one of the things that I speak to at great lengths in my book is that I actually don't attribute that much of the blame to the company's takeover to August Busch IV. I think a lot of the reasons Anheuser-Busch became so vulnerable (are rooted in) his father's reign and the decisions that his father made."

As for Martin's death, MacIntosh says, "In terms of whether charges will be filed or not, I think there's certainly the potential that August Busch IV just has incredibly bad luck and this woman may have died from circumstances that had nothing to do with him.

"That said, he has long lived a fast life, so it doesn't necessarily mean that he wasn't involved in some way. We'll just have to see.

"But, the implications for him going forward are interesting in that he is a board member of Anheuser-Busch InBev, currently, and they're going to have to make a determination as to whether they're comfortable with him being in the public eye right now for something like this. I don't think they necessarily have to wait for charges to be filed to make their own corporate decision on the matter. And I'm sure they've talked to him about what has happened, and we might get a sense of what they believe actually happened behind the scenes based on what their decision is."