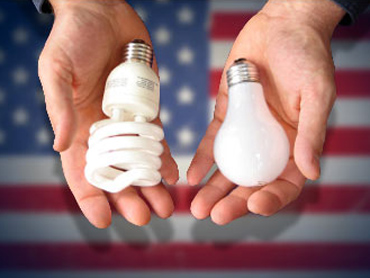 In our "Where America Stands" series, CBS News is looking at a broad spectrum of issues facing the country in the new decade.

When Thomas Edison opened the first electric power station in the United States in 1882, he could not have foreseen America's insatiable demand for electric power.

Americans consume on average 13,000 kilowatt-hours of electricity per person per year, which is twice the average of a person in the Great Britain, and about six times more than someone living in China.

And Americans are increasing their use by 30 percent a year.

Of all the electric power generated in the U.S., about 22 percent is used for lighting, and most of that power is wasted. The culprit is Edison's lightbulb, which is virtually unchanged since its invention in 1879.

"The incandescent light bulb is basically fire in a glass bulb," according to Steve DenBaars, professor of materials and co-director of the Solid-State Lighting Center at the University of California Santa Barbara.

But the incandescent lightbulb's run as our primary light source is coming to an end. The U.S. Department of Energy is imposing tough new efficiency standards for lighting. Edison's lightbulb will be banned by 2014.

"That was a flop, and the reason was people really underestimated the impact of light on the human being," said Tom Hamilton, senior product manager at Philips, a Dutch-based electronics company. "You have to have the quality and quantity of light that you're familiar with and used to, in order to really have a viable replacement."

To find a solution, the U.S. government is offering a $10 million prize, called the "L-Prize," to the company that builds the most efficient bulb with the most pleasing light.

Philips submitted the first design to the L-Prize contest. The bulb features light emitting diodes (or LEDs), which used 80 percent less energy than an incandescent bulb and half as much as compact fluorescent lights.

"We've spent 15 years trying to perfect LED lighting, trying to make it replicate the incandescent lightbulb, and we are now on the verge of doing that," DenBaars said.

LEDs are semiconductors, similar to the chips used in computers and manufactured in high-tech clean rooms. Producing soft, white light was one of the final hurdles for engineers.

According to Philips' Hamilton, LED-based lightbulbs compare favorably to the incandescent lightbulb. "At the end of the day, I think we've done our job here," he said.

However, the LED lightbulb comes with a catch: It costs about $40 per bulb.

"I'll be optimistic, and say that's been coming down around 50 percent a year, and within a few years the lights will be in the $5 to $10 range," DenBaars said.

Tell Us What You Think - Send us an e-mail.
CBS Reports: Where America Stands

Philips is not the only company trying to enter the LED lightbulb market. General Electric has a prototype LED bulb, and is expected to submit a design for the L-Prize.

"We're working on projects across the country, and frankly around the world, where they're installing new street lights to replace the old ones," Swaboda said. "The difference between a regular light bulb and an LED light bulb, what you should notice is, almost nothing. That's the key to making the technology work."

LED is the near-term solution for more energy-efficient, high quality lighting, but the longer-term future of lighting is OLED - "Organic LED" technology. Like LEDs, OLEDs are based on semiconductors, but add thin layers of organic molecules that create light when electric current is applied.

OLEDs - ultra-thin, cool to the touch and flexible - will enable new ways of lighting and display, such as transparent displays embedded in windows and uniquely-designed lamps. They also consume less power than incandescent bulbs.

"Once you can bend, you're thinking outside the bulb. This is a new dimension."

"Imagine having a light source that you put into your window at home," said Janice Mahon of OLED pioneer Universal Display. "During the day it's transparent, the sun shines in. But at night you can turn the window on, so light will glow and light your room."

Affordable OLED lighting and large screen displays are perhaps five years from store shelves. OLED-based screens and lighting as depicted in the movie "Minority Report" are even further out.

But it's clear that after more than a century, America is finally turning its most enduring innovation into the next bright idea.