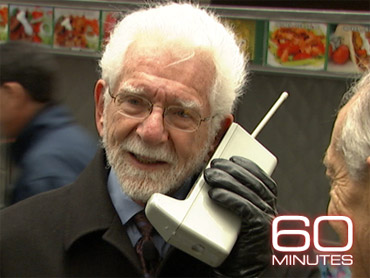 Editor's note: Though Martin Cooper and his team at Motorola built and demonstrated the first cell phone, there were many fathers of the technology involved in transmitting calls. Prominent among them: Amos Joel, Jr. of AT&T/Bell Labs, who created the system that switches signals from one cell tower to another - the basic component that lets callers talk while moving. Mr. Joel was inducted in the National Inventors Hall of Fame in 2008 for his development of the switching concept for cellular phones.

There are seven billion people on the planet, and nearly five billion cell phones - meaning most of the Earth's population is connected for sound, for picture, and for heaven only knows what else.

The cell phone has brought us a world without end of talking, twittering, texting, even of sexting. If you don't know what that is, ask any high school kid.

It is all a result of Marty Cooper's big idea. And he looks at it all with pride, amusement and some dismay. And with good reason: he is the father of the cell phone. He built the first one 37 years ago. It ushered in a technological and social revolution which he believes is far from over. He made the first public cell phone call on the sidewalks of New York, in 1973.

"This is a time when there were no cordless phones. And certainly no cell phones. And here's this guy talking as he was walking along. And I stepped into the street and nearly got creamed by a New York taxicab. So talk about being prescient and seeing a picture of the future," Cooper told "60 Minutes" correspondent Morley Safer.

It's a future - of non-stop connection of apps galore, iPhones and Droids, Blackberrys and Blueteeth - or is it Bluetooths?

Marty Cooper checks out the latest at the wireless industry's annual convention in Las Vegas, a huge convergence where geeks meet gizmos.

And unlike some of us of a certain age, he understands all of it.

Asked if he twitters, Cooper said, "I signed up for Twitter about six months ago, did nothing and I had 17 followers. So now I'm actually twittering. My latest twitter is, 'The secret of successful aging is to have good genes and to show a lot of respect for the genes.'"

Asked if he thinks he's the oldest twitterer in America, Cooper said, "I don't want to be the oldest anything in America. Sorry about that."

But you'll have to look hard to find anyone older on the slopes at Vail, his favorite getaway. Cooper was born in Chicago on the eve of the Great Depression. He's 81, an age, for many, when the most strenuous exercise of the day is getting in and out of bed.

"His tennis and his skiing are better than they've ever been. I have a hard time keeping up with him. And I'm almost 20 years younger," his wife Arlene Harris told Safer.

With his wife, another veteran of the mobile phone business, Cooper is still in the game, awaiting the next big thing in wireless communication. He's convinced that the cell phone, at 37, is still in its infancy.

"Technology has to be invisible. Transparent. Just simple. A modern cell phone in general has an instruction book that's bigger and heavier than the cell phone. That's not right," Cooper said.

Call it the complexity or confusion factor.

Cooper argues that cell phones designed to do everything - take pictures, play music and videos, surf the Web - don't do any of them really well. He thinks the buyers should be dictating exactly what they want.

"The consumer is king. The consumer ought to make the decisions. And not, certainly not the engineer," Cooper said. "Engineers tend to get enchanted by the technology itself."

So it seems only natural that the latest gadget developed by Cooper and his wife is a retro cell phone called the "Jitterbug." It's a basic phone - there's no camera, no music. Any idiot can operate it.

It sounds simple enough: if you can hear a dial tone on the Jitterbug, you can make a call. "If there's no dial tone you can't," Cooper explained.

His next target are lost calls, also known as drop outs. Atop his office building, ugly conventional cell phone antennas are disguised as flagpoles.

He's developing so-called smart antennas that can cut through all the competing noise in the radio environment to get your call through.

"And what they do is when we transmit, we send the information only to your phone," Cooper explained.

Asked if we'll reach a day when a cell phone is as perfect as a landline, Cooper said, "That's exactly right."

What hath Marty Cooper wrought? Let us go, for a moment, back to the future.

The cell's precursor, the car telephone, came in right after World War II.

"A tiny radio transmitter sends your voice out on the airwaves to the nearest central station, where regular telephone operators can connect you with any telephone on land or sea," one newsreel explained.

It was a world of wonders: if someone was sick, you could track down the doctor on the road. Remember: these were the quaint old days when doctors, at least in newsreels, made house calls.

Even then, it was clear that being connected would put everybody on a very short leash.

And when in the 1960s AT&T developed more sophisticated cellular antennas the phone giant still considered car phones the name of the game. But Cooper and his engineers at Motorola thought otherwise, and decided to elbow their way into the business.

"We really had a basic understanding that people are mobile. And it's personal telephones they wanted. It's handheld portables," Cooper remembered. "So there was a real conflict between this elephant, which was AT&T, and this fly that was Motorola. But we ended up winning."

On a chilly spring day, we took Cooper back to the spot where he made that first call: Sixth Avenue, outside the New York Hilton. For the record, the call went to Joel Engel, Cooper's rival at AT&T.

He couldn't resist rubbing it in.

At a news conference inside the Hilton, Cooper introduced his gadget and encouraged reporters to try it out.

"The first reporter I talked to actually called her mother in Australia. And she was astounded when her mother answered. She couldn't understand how this little phone could talk halfway around the Earth," Cooper explained.

"Little phone? What are you talking about?" Safer asked, referring to the first cell phones size and heft.

"Well, relatively small. I mean, after all, it only weighed two and a half pounds," Cooper replied.

So where is cell phone technology going?

"I think we are just barely scratching the surface," Cooper said.

Take the issue of health and fitness: a workout fanatic if there ever was one, Cooper says the day is fast approaching when your phone - or something like it - will be checking your vital signs, day and night.

"The health care industry is gonna be revolutionized because you will have sensors at various points on your body measuring different things. And a computer somewhere, or maybe a doctor, will be examining you all the time," Cooper predicted.

It's not that far-fetched. Health monitoring was a major theme at that recent wireless convention in Las Vegas.

"The concept of the annual physical examination, it's almost worthless because looking at your body at a point in time doesn't really tell doctors very much at all. But if you could measure these things all the time you can predict heart failures. You can predict diabetes. And you could prevent all those things," Cooper explained.

From his hideaway overlooking the Pacific, in Southern California, Cooper contemplates a society where such familiar touchstones, like money and credit cards, simple human contacts are things of the past, replaced by wireless devices that will rule our lives.

"Isn't there almost a Brave New World sensibility behind all of this being connected? What does it do to our privacy?" Safer asked.

"Sorry. Privacy is a thing of the past," Cooper replied.

He's got a point. Security cameras track our movements, cell phones hold clues to what we've read, where we've been, and where we are. Police track down suspects on Facebook. And police states can no longer suppress instant images of their repression.

"I think the whole concept of privacy requires a new mindset among people. There are people who object to somebody monitoring their buying habits. I'm delighted if people know what I buy because they're gonna tailor their marketing to me and the products that are available to me, to my tastes. Well, that's a good thing," Cooper said.

"Well, yes and no," Safer remarked. "I mean, hiding something is a kind of undeniable human right, you know? To have some sense of a private life. The next gizmo could start reading our thoughts? And who wants that?"

"They're not gonna be able to read our minds for a few generations, if ever," Cooper replied.

"But they're working on it, though," Safer remarked.

"Yes, they are," Cooper agreed.

Cooper is annoyed, as we all are, by his cell phone. The phone butted in as he and Safer were discussing the gadget's history when it made a bird-like sound to alert him that he got a notification.

And he is philosophical on the topic of bad phone manners, that worldwide curse of other peoples' chatter, sound and fury signifying nothing.

"You know, it doesn't take a telephone to make people be either stupid or rude," Cooper said.

So get used to it and don't take it out on the phone. They're making them shock-proof and waterproof anyway.

And besides, as the future bears down on us, Cooper says eventually, man and machine will become one.

"The optimum telephone is one that I think some day is gonna be embedded behind your ear. It's gonna have an extraordinarily powerful computer running the cell phone. And I'm gonna name my computer Sam, and I'm gonna say, 'Sam, get Morley on the phone for me.' And Sam's gonna respond in my ear, 'Which Morley? Is this your cousin Morley in Toronto? Or the Morley Safer in New York?' And I'm gonna say 'Morley Safer.' And the next thing you know, I'm gonna be talking to you," Cooper said.