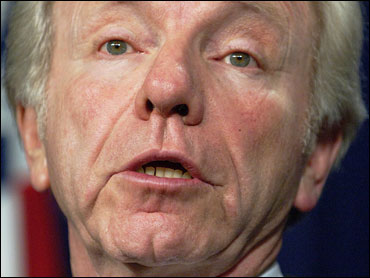 This column was written by Matthew Yglesias.

Ned Lamont's primary challenge in Connecticut to Joe Lieberman struck me from the beginning as a little quixotic and ill-motivated. For all Lieberman's sins — his disgusting take on Abu Ghraib ("Those who murdered and burned and humiliated four Americans in Fallujah a while ago never received an apology from anybody") especially comes to mind — he hasn't really defected on anything the Democratic leadership has tried to force a party-line vote on. Back when Lieberman was flirting with Social Security privatization, I thought a primary challenge would be warranted unless he returned to the true path, which he did.

But Lamont ran anyway, and he's done well enough that the Lieberman camp has been forced to try and respond. What they've come up with has been almost shockingly weak.

Jonathan Chait conceded that Lieberman was a bad senator in many ways but that he'd back him at the end of the day "since their anti-Lieberman jihad is seen as stemming from his pro-war stance, the practical effect of toppling Lieberman would be to intimidate other hawkish Democrats." This, to me, sounded like a good reason to hope Lamont won. A country in which many politicians fear that being too dovish will lead to political problems, but nobody fears appearing too hawkish, becomes a radically unbalanced country that does dumb things, like invade Iraq.

Indeed, most Lieberman supporters seem to have abandoned making the case for their man on the merits. Instead, the keyword is principle. A DLC press release called Lieberman "a man of utmost integrity who speaks and governs by his values and principles." The same release quotes Harry Reid as saying that "very few people I've known in my lifetime are as principled and decent as Joe Lieberman."

Principles, though nice, are wildly overvalued in our politics. Say I'm watching the game with some friends and we decide to order a pizza. Pepperoni. Then the guy shows up at the door and delivers peppers and onions. He screwed up. He's a bad deliveryman. We're pissed. Then he explains he's a vegetarian. Eating pepperoni is wrong. It's a principled stand, you see.

Well, nobody's going to be very impressed with that. The guy's got a job to do — giving me the pizza I ordered — and pleading principle is no defense for error. Lieberman's job is to support good public policy. In his defense, he mostly does. But more frequently than one would like, he doesn't. That he may or may not have principled reasons for supporting bad ideas is neither here nor there.

What's more, one sort of doubts Lieberman is really the man of sterling principle that his friends like to portray him as. As Chait pointed out, Lieberman doesn't only have relatively right-wing views on national security policy — he's also a longtime defender of cuts in capital gains taxes, an opponent of financial regulations, and generally speaking a defender of the prerogatives of insurance companies many of whom happen (coincidentally?) to be based in Connecticut. All this at least looks more like a quest for campaign contributions than something he pulled out of the Talmud. But, really, what difference does it make? Taxing capital gains income at a lower level than wage income is a bad idea — it exacerbates inequality and has no beneficial impact on the economy — and pinning down exactly why someone defends it has nothing to do with anything.

Indeed, at times putting principles into play makes things worse. Lieberman, like a certain segment of the political class is want to do, occasionally engages in a demagogic rant or two against musicians, actors, directors, and producers who make songs, movies, or TV shows he doesn't like. Usually, I think politicians who do this are acting cynically — pandering to the confused views and general ignorance of America's parents while espousing a crass philistinism they don't really believe in. Lieberman at least plausibly really does think the role of a United States senator ought to be complaining about Friends' time slot. If so, that's all to the worse. Politicians who pander to misguided public concerns are problematic; politicians who genuinely share those misguided concerns and help to feed and create them are worse.

But maybe he's just posturing. On foreign policy, there's really no doubt that Lieberman is acting from a position of genuine conviction. Unlike most Democrats who seem to have shaded their views right out of political calculation, Lieberman has repeatedly positioned himself as more hawkish on Iraq than political self-interest would dictate. I don't think he's dumb; I think he means it. Some of his best friends are neoconservatives, and when he says he's ready to support a war with Iran, I believe him.

And good for him for standing up for his beliefs. Except, on this front, his beliefs are incredibly wrong and could lead to untold levels of death and destruction. Under the circumstances, I'd be happier with a cynic who recognized that his warmongering was imperiling his political career. That's the trouble with principles — they're only good if your principles are the right ones. If Lieberman's allies want to help him stay in office, they're going to have to start convincing people that his are — just pointing out that he has some isn't good enough.