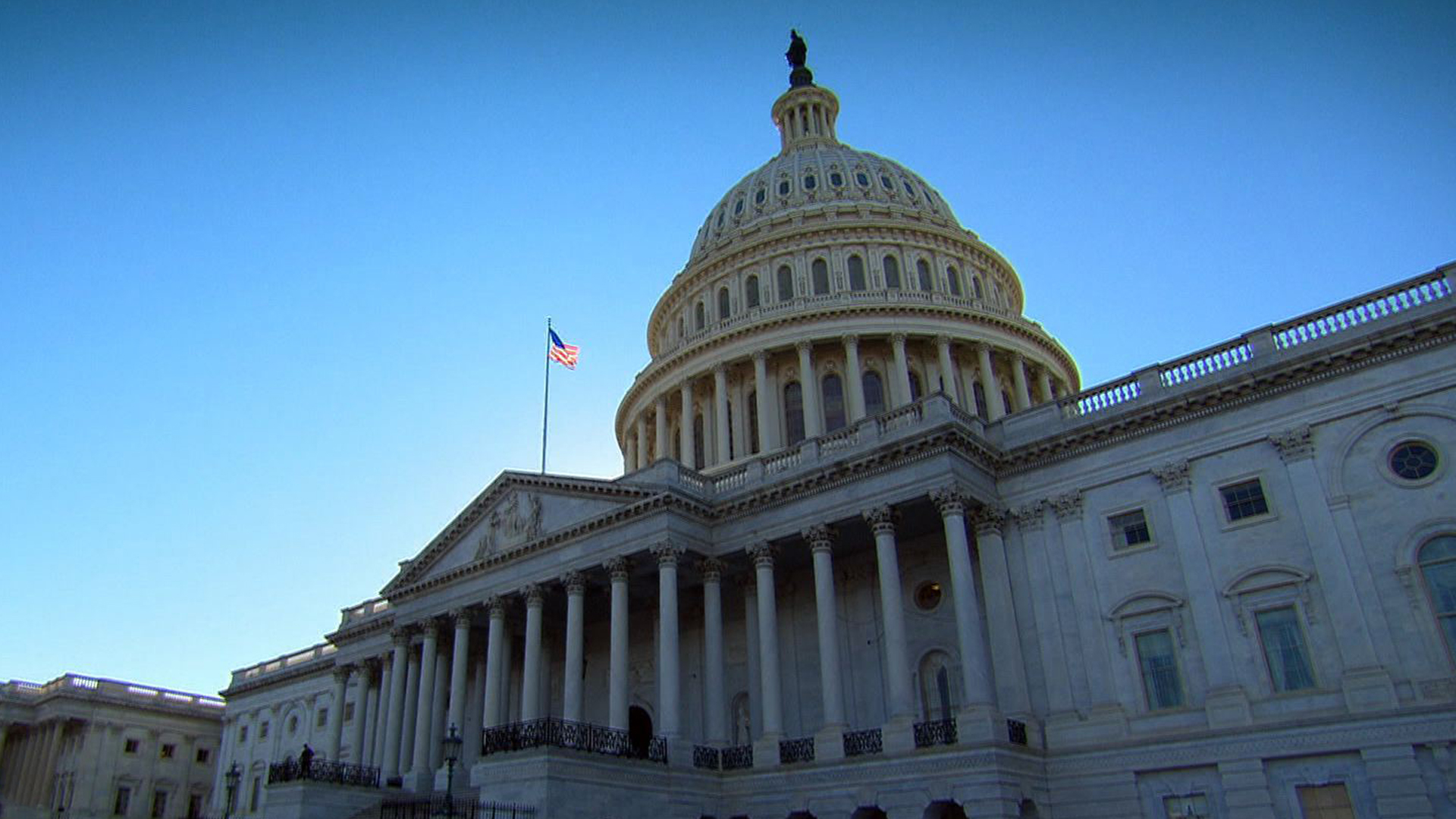 The following script is from "The Capitol Dome" which aired on Dec. 1, 2013. The correspondent is Scott Pelley. Nicole Young, producer.

If you’re yearning for something that rises above the dysfunctional politics of Washington, we have just the thing, 288 feet above, in fact. Tomorrow marks the 150th anniversary of the completion of the Capitol Dome. It’s hard to imagine America without this crowning achievement but when you hear the story of how it was created it becomes hard to imagine that our dome exists at all. We were given amazing access for this story. And you’re about to see the dome like you’ve never seen it before.

George Washington knew what he wanted—a building so grand that no one could ever move the capitol from his city. He’d still find it on Jenkins Hill where he laid the cornerstone. And he’d might admire the dome, which was built later, for what it overcame. Built by men who despised each other, topped by a Statue of Freedom cast by a slave—through war and rivalry the dome kept rising. And, that’s American character that runs deep below the skin.

Stephen Ayers: This is where we go from that beautifully richly decorated Capitol to the battleship gray industrials parts of the Capitol building.

Stephen Ayers holds the title “Architect of the Capitol.” He takes care of the dome and everything below.

Scott Pelley: This is all original? It's all 150 years old?

Stephen Ayers: Yes, it is.

All this was designed by Ayers’ predecessor, Thomas Walter who proposed a dome no one had asked for. This is the Capitol that George Washington knew and it’s still the center of the Capitol Building today. Walter won a competition to expand the House and Senate sides to hold all of the politicians coming in from the new states. But then, Walter thought the original dome looked too small so he drew another.

Walter drafted it after the great marble domes he’d seen in Europe only to discover that the building couldn’t support the weight. So he conjured an illusion. Everything, every column, every ornament is cast iron painted to look like stone. The weight was cut in half.

Stephen Ayers: This is from 1863 you can see it’s signed by Thomas Ustick Walter.

His drawing in the archive reveals there are two domes, an inner dome with a ceiling painted with an “apotheosis” of George Washington ascending into heaven and the outer dome ascending into the sky.

Stephen Ayers: We are climbing up this inner dome the apotheosis of Washington fresco by Constantino Brumidi.

Scott Pelley: That’s right below us,

Scott Pelley: We’re on top of that.

Stephen Ayers: That’s exactly right and this is the level that we go outside.

Scott Pelley:  This is the top.

Stephen Ayers: This is the top.

It’s about 30 stories and because D.C. outlawed skyscrapers back in 1910 you can see forever. For the record, the Washington Monument, still being refurbished, is nearly twice as tall.

Scott Pelley: So there's the National Mall. They're taking the scaffolding down off the Washington Monument.

Stephen Ayers: Yes. You can see the Potomac River and Anacostia Rivers coming together.

Scott Pelley: Steven, what did it mean to have this dome completed? Very near the end of the civil war.

It took enormous will. In Congress, the first vote on the dome passed 71 to 70. A critic called it “a great mistake.” And then, came the Civil War —not the war you’re expecting-- this was the war between the greats. The brilliant architect vs. the genius in charge of construction, Army Captain Montgomery Meigs.

Bill Allen was the historian in the office of the architect who told us, that despite Meigs’ virtues he was obsessed with winning fame.

Bill Allen: And the way that he chose to do this was to put his name in every place that it occurred to him where it could go.

It went on the bricks of the D.C. aqueduct and on its stairs. M.C. Meigs even etched his name on copper plates and laid them between the stones of the Capitol.

Bill Allen: In case 2,000-3,000 years later that Capitol became an archeological site. The archeologists would discover these plates and know exactly who built the Capitol extension.

But the last straw came when Meigs claimed authorship of the dome signing his name to Walter’s drawings. The two men stopped talking and raised their pens like swords.

Bill Allen: The letters are well worth reading. They are they are amazing.

We found them in the archive:

[Meigs: “You are welcome to assume the authorship of…the pyramids of Egypt…you have no... right... to…the new dome…”

Walter: “If I am not the architect of the new dome I would like to know who is…” “[I] shall be glad never to receive another line from you.”

Meigs: “I have the honor to inform you that your services are dispensed with…”]

Scott Pelley: He fired him.

Bill Allen: He tried to. Walter, very calmly, writes back and says, "I would like to remind you that my appointment is at the pleasure of the President of the United States.”

The work slowed but planning continued including a debate about what to put on top.

Lonnie Bunch: They decided that they would have a statue that would speak of freedom.

Lonnie Bunch: And they went to a young American in Rome who was studying, and he came up with this idea to create a statue that had the look of America.

Scott Pelley: Describe her to me in your mind’s eye.

Lonnie Bunch: Well, she is this beautiful woman who has some Native American features is capped by this beautiful headdress as reminder that this is a country that was different because it was built first and foremost around the issue of freedom.

Scott Pelley: And one of the men instrumental in casting the statue was a slave named Philip Reid.

Lonnie Bunch: Philip Reid was an enslaved man who was owned by someone who owned a foundry here in Washington. And that when the statue, initially plaster, came back to the United States, there was a concern about how do you take it apart? Philip was really one of the people who knew how to do this, and he came up with the idea of how to separate the model, how to then cast the model. He led the people who were making the cast of the bronze statue.

But freedom would be grounded in 1861 when the real Civil War began. Montgomery Meigs left to become quartermaster general, supplying the Army with all that it needed for victory. But all money for construction was diverted to the war.

Scott Pelley: One of my favorite stories that I love to tell my friends is that Lincoln ordered the dome to continue as a symbol that the nation would continue and that story turns out to be false.

Matt Wasniewski, a historian for the House, told us it was the contractor, Janes, Fowler, Kirtland of New York, that resumed work without pay. They’d delivered 1.3 million pounds of cast iron and didn’t want to see it rust away. Lincoln didn’t mind.

Matt Wasniewski: He has the famous line that if the people see the Capitol going on, it will be a sign that we intend the Union shall go on.

This is the rotunda, you’re walking between statues of Washington and Jefferson. Its just off this room that you find the office of the Speaker of the House John Boehner who  administers a lot of what he called the campus.

John Boehner: Never.  Listen, for a kid who grew up mopping floors at his dad's bar, it's a pretty humbling experience.

Scott Pelley: You've come up in the world.

"Listen, for a kid who grew up mopping floors at his dad's bar, it's a pretty humbling experience."

We went up in the world from the floor of George Washington’s original Capitol to the heights of the inner dome.

John Boehner: I told you it’d be beautiful up here.

This is the apotheosis of Washington by Constantino Brumidi.

Scott Pelley: I understand that somewhere in here the artist painted the face of the architect who designed the dome.

John Boehner: It's right over here.

Scott Pelley: Thomas Walter is the one in the long white beard.

The scenes depict American hard work and ingenuity. And 180 feet below 21st century citizens look up at Washington rising at the center of the city laid down by he and urban planner Pierre L’Enfant.

Stephen Ayers: Look how L'Enfant laid out this city with these radiating streets? Maryland and Pennsylvania and New Jersey and Delaware.

Scott Pelley: The Capitol right in the center--

Stephen Ayers: Right in the middle.

Scott Pelley: --and everything proceeds from here.

Stephen Ayers: And you put the Capitol atop this hill. And that's how you create this iconic symbolism.

Scott Pelley: It was a symbol for the whole nation that the Union would endure. Now your job is to make the dome endure.

Up here you can see what is hidden from a distance. The dome is falling apart.

Scott Pelley: Your guys bring in pieces into the office and say, “Hey boss, here’s what I found?”

Stephen Ayers: You can see the level of rust behind it that is just eating away at the cast iron.

Even worse, there are more than 1,300 serious cracks in the dome. Architect Stephen Ayers is starting a massive repair project. He showed us how they’ll cover the dome with scaffolding for the next two years -- replace the rusted parts -- and stitch the cracks together with metal sutures. Minority Leader Nancy Pelosi helped Congress put up nearly 60 million for the work.

Scott Pelley: A lotta people think that you guys can't agree about anything. And yet, everybody came around to the idea of refurbishing the dome.

Nancy Pelosi: This Capitol belongs to the American people. It is this place for them to visit. It is the most identifiable symbol of democracy that there is.

On Dec. 2, 1863, the dome was topped with the statue of freedom. And below, Congress had been working on freedom too. It’d passed an Emancipation Act for the District of Columbia.

"This Capitol belongs to the American people....It is the most identifiable symbol of democracy that there is."

Scott Pelley:  When Philip Reid helped cast the Statue of Freedom, he was a slave. By the time it's placed on top of the dome, he's a free man.

Lonnie Bunch: He is free. What happens to him is that he symbolizes so many of the enslaved African-Americans who looked at that dome and saw it as a place of possibility, saw it as a place that said "Here is the freedom that we deserve."

The titanic struggle that crowned the Capitol is largely forgotten now but next time you look on political gridlock and wonder whether anything can get done—remember how much can rise above the fractured politics of Washington.