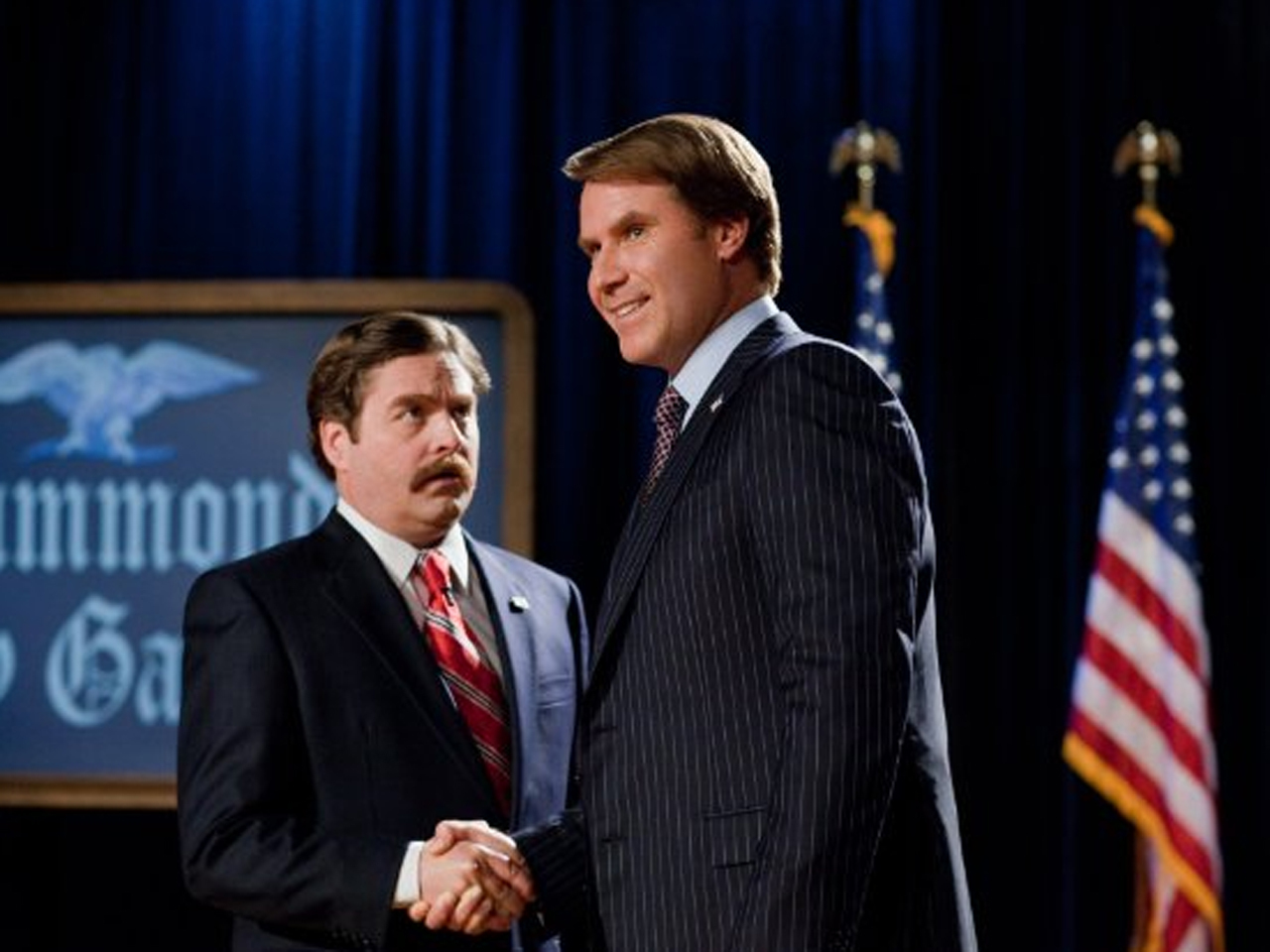 (CBS News) WASHINGTON -- At an early screening of the new movie "The Campaign," Rep. Donna Edwards, D-Md., couldn't help but cringe a few times when the rest of the audience was laughing.

Perhaps people were laughing a little too hard.

"I wonder if people actually think members of Congress are like that, because it was way over the top," Edwards said afterwards.

The new comedy starring Will Ferrell and Zach Galifianakis is filled with the sort of bawdy jokes and sight gags the actors are known for, but it also serves up some blistering commentary on the current state of our political system. At a pre-screening this week in Washington, D.C., it was difficult at times to know what made the audience laugh more.

CBSNews.com sat down with Edwards, Rep. Dennis Kucinich, D-Ohio, and GOP strategist Trey Hardin, senior vice president at the firm VOX Global, to watch the movie and discuss how congressional elections turned into a joke. (Click player at left to watch full report.)

The movie's prime focus is the overwhelming influence of corporate money in politics. The strong point of view shouldn't be too surprising in a film produced and directed by Jay Roach, who, along with movies like "Meet the Parents", directed HBO's "Game Change," the story of Sarah Palin's vice presidential nomination, as well as HBO's "Recount," which focused on the 2000 presidential election.

This film focuses on the fictional 2012 congressional race in North Carolina's fictional 14th district. Ferrell's character, Democrat Cam Brady, expects to slide into a fifth term -- and become a future prospective vice presidential pick -- with no competition. Not even sex scandals can stop him until the Motch brothers, played by John Lithgow and Dan Aykroyd (and obviously modeled after the real-life Koch brothers), find a candidate they can manipulate in the unsuspecting oddball Marty Huggins, played by Galifianakis.

The storyline isn't far from reality -- super PACs have propelled the unlikeliest of candidates to victory. And while a few hundred thousand dollars -- or even a few million -- may not make much difference in a presidential race, it can be huge in a congressional election. According to the nonpartisan Sunlight Foundation, super PACs spent $65 million in the 2010 campaign cycle.

"If this [movie] isn't a commercial for public financing and totally abolishing corporate control of the process, I don't know what is," Kucinich said.

The Motch brothers pour a small fortune into the campaign and turn it upside down. What plays out is an over-the-top electoral saga filled with slick and cynical campaign managers, wildly misleading ads, extravagant campaign rallies, and plenty of mudslinging.

After the movie, Kucinich said, "I was thinking, 'I saw the preview of this in Ohio's primaries. Somehow the word got out.'"

Kucinich lost a primary this year against Rep. Marcy Kaptur. The two were once allies, but the primary became a brutal slugfest.

"As far as sliming candidates -- yeah," he said emphatically. "Does that happen? You bet it does, and it does in some ways that are pretty chilling where people have their name trashed. That's why some people don't want to go into politics."

And like Marty Huggins, some of the people who do go into politics change quickly, noted Hardin, who's worked on several Republican campaigns.

Plenty of candidates, Hardin said, "need a lot of coaching. Many of them won't be themselves, they're not authentic." Because of the way the political system operates, he said, "Fundraising is a priority, and therefore special interests can be a priority. And that works on both sides of the aisle."

Once in office, Hardin continued, "This town changes people... The reality is that it does change folks. There are a number of the Republican Tea Party freshmen that won two years ago that got here and... didn't want to run for re-election because they didn't like what they saw when they got here."

The movie ends with the candidates regaining some authenticity -- something Hardin, Edwards and Kucinich all approved of.

"At the end of the day, most people, they want to get up every day and think about all kinds of other things, and they want to trust you as an elected official just to do the job," Edwards said. "They want you to be straight with them -- they don't even have to agree with you all the time."

Kucinich chimed in, "In the end, redemption comes by not selling out. I like that."