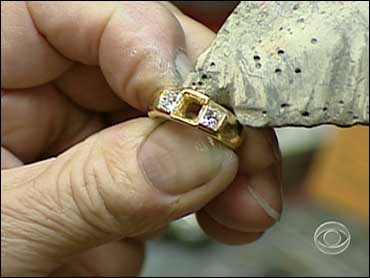 "It's feast or famine in any kind of construction," he says.

So he's trying something new: working for a homeowner who won't pay him a dime.

"He may not be paying cash, but I am able to get things I wouldn't buy," he says.

Moonie bartered with James and Rhonda Parivechio. He gets a used dirt bike and all-terrain vehicle. They get new hardwood floors.

"We figured the fair market value was worth what he was doing for me," James says.

In a down economy, bartering is way up -- 98 percent from a year ago on Craig'sList, the online giant for classified ads. More people are finding something to swap.

"Trade isn't going to stop just because money is short and credit is not available," says Jim Buckmaster of Craig'sList.

"My major costs are the labor, the truck and the vinyl," he says.

To cover those costs, Thomas barters on IMS, a booming nationwide bartering service for businesses. He trades the value of his company's ads, and in return, picks from a menu of goods and services offered by 18,000 bartering companies.

"It goes back to a farmer swapping three chickens for a pig," says Magellan Transit Media President Stan Thomas. "I mean, it's as old as it gets. It's just more sophisticated now."

And it's drawing more sophisticated traders, like Dave and Sheila Meadow. From their family-owned jewelry store, they've bartered with silver and gold the last 25 years.

Most of their home's furniture and art, even clothes for their nine kids, was bartered.

"What about your kids?" Strassmann asks. "Did you get your kids on barter?"