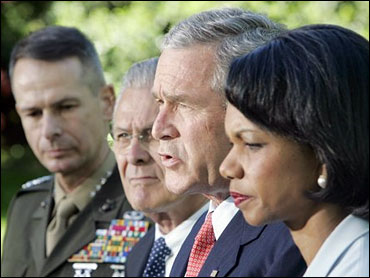 This column was written by William Kristol.

"We are committed to a diplomatic course [to stop Iran's nuclear program] that should, with enough unity and with enough strength and with enough common purpose, make it possible to convince the Iranian government [to change its course]. . . .

"Let me go right to the crux of the question. The United States of America understands and believes that Iran is not Iraq. The Iraq circumstances had a special character going back for 12 years of suspended hostilities after a war of aggression which Saddam Hussein himself launched. . . .

"It goes without saying that the United States believes and others believe that, in order to be credible, the U.N. Security Council, of course, has to act. . . . The Security Council is the primary and most important institution for the maintenance of peace and stability and security, and it cannot have its word and its will simply ignored by a member state." — Secretary of State Condoleezza Rice in Europe last week, from Glenn Kessler's April 28 account in the Washington Post, "U.S. Tries to Calm Fears in Europe on Using Bases"

In fact, Condi and her colleagues will try to say — privately and off the record — that it ain't so. They'll explain to Bush supporters here in Washington that the administration hasn't really gone soft on Iran. The State Department is just doing its job, reassuring the Europeans so as to keep them on board. Sure, hawks will worry that proclaiming "Iran is not Iraq" signals that the Bush administration is now terrified even to threaten the use of force against terror-sponsoring dictatorships seeking weapons of mass destruction. But all options, at least theoretically, are still on the table. And Ahmadinejad is doing such a good job scaring the Europeans. This is no time for Washington to be scary!

No, it's time to be reassuring. That doesn't mean we don't do some finger-wagging when Ahmadinejad taunts and challenges us, saying one day he's going to destroy Israel, the next that he's going to transfer nuclear technology to Sudan, and meanwhile buying more long-range missiles from North Korea. But it would be simple-minded to rise to his bait, and to think that we really have to do something tough in response to him.

After all, he's just hurting himself! At some point the Iranian government will figure out that aggressiveness and bellicosity don't really produce victories. They'll come to understand that the momentum Tehran seems to have built up in the last several months is misleading. If it looks as though Iran is suddenly being treated with more fear and more respect throughout the Middle East, and beyond — that's just temporary. Deep down, the Iranians know, as the State Department knows, that what really matters is that they're running a risk of getting pretty darn isolated from the international community. And meanwhile, we're arm in arm with the Europeans again.

As for the statement, "The Security Council is the primary and most important institution for the maintenance of peace and stability and security" — of course that's not true. But what's the harm in saying it? It creates goodwill as the United States goes through the Security Council process. Sure, that process won't lead anywhere. But then the Europeans will finally see that they've got to join us in serious sanctions. They will be very targeted sanctions, which won't affect ordinary Iranians, because that would be counterproductive. But a signal of resolve will have been sent to Tehran, nonetheless. They will know that if they don't change, we and the Europeans will remain united behind these targeted sanctions. And you can't argue with this: Our relations with the Europeans are much better than they were during that nightmarish first term.

Yes, that's the view from Foggy Bottom. And it's true the Europeans don't fear the Bush administration any more. Nor, unfortunately, do others. One might also note that, despite all the goodwill built up by our outreach to the capitals of Europe, President Bush seems much weaker today than he was in the bad old days of unilateralism and bellicosity, and so does the United States. But the State Department is popular, and at least we don't look like Neanderthals in the drawing rooms of Europe and Georgetown.

Condi and her colleagues may come home and say, privately, it ain't so. But it is so. Much of the U.S. government no longer believes in, and is no longer acting to enforce, the Bush Doctrine. "The United States of America understands and believes that Iran is not Iraq." That's a diplomatic way of saying that the United States of America is in retreat.