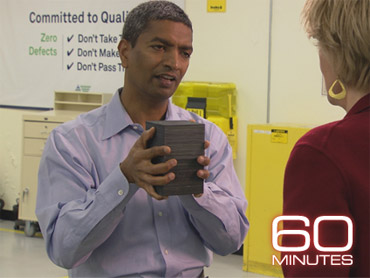 In the world of energy, the Holy Grail is a power source that's inexpensive and clean, with no emissions. Well over 100 start-ups in Silicon Valley are working on it, and one of them, Bloom Energy, is about to make public its invention: a little power plant-in-a-box they want to put literally in your backyard.

You'll generate your own electricity with the box and it'll be wireless. The idea is to one day replace the big power plants and transmission line grid, the way the laptop moved in on the desktop and cell phones supplanted landlines.

It has a lot of smart people believing and buzzing, even though the company has been unusually secretive - until now.

K.R. Sridhar invited "60 Minutes" correspondent Lesley Stahl for a first look at the innards of the Bloom box that he has been toiling on for nearly a decade.

Looking at one of the boxes, Sridhar told Stahl it could power an average U.S. home.

"The way we make it is in two blocks. This is a European home. The two put together is a U.S. home," he explained.

"'Cause we use twice as much energy, is that what you're saying?" Stahl asked.

"So four homes in India, your native country?" Stahl asked.

"Four to six homes in our country," Sridhar replied.

He says he knows it works because he originally invented a similar device for NASA. He really is a rocket scientist.

"This invention, working on Mars, would have allowed the NASA administrator to pick up a phone and say, 'Mr. President, we know how to produce oxygen on Mars,'" Sridhar told Stahl.

"So this was going to produce oxygen so people could actually live on Mars?" she asked.

When NASA scrapped that Mars mission, Sridhar had an idea: he reversed his Mars machine. Instead of it making oxygen, he pumped oxygen in.

He invented a new kind of fuel cell, which is like a very skinny battery that always runs. Sridhar feeds oxygen to it on one side, and fuel on the other. The two combine within the cell to create a chemical reaction that produces electricity. There's no need for burning or combustion, and no need for power lines from an outside source.

In October 2001 he managed to get a meeting with John Doerr from the big Silicon Valley venture capital firm Kleiner Perkins.

"How much do you think, 'I need to come up with the next big thing'?" Stahl asked Doerr.

"Oh, that's my job," he replied. "To find entrepreneurs who are going to change the world and then help them."

Doerr has certainly changed our world: he's the one who discovered and funded Netscape, Amazon and Google. When he listened to Sridhar, the idea seemed just as transformative: efficient, inexpensive, clean energy out of a box.

"At the time he said over a hundred million dollars," Doerr replied.

But according to Doerr that was okay.

"So nothing he said scared you?" Stahl asked.

But there was a selling point: clean energy was an emerging market, worth gazillions.

"I like to say that the new energy technologies could be the largest economic opportunity of the 21st century," Doerr explained.

He told Stahl it was the firm's first clean energy investment.

Many followed, and the clean tech revolution in Silicon Valley was off and running with start-ups that produce thin flexible solar panels, harness wind with giant balloons, or develop new fuels from algae.

But Bloom is among the most expensive. "I heard actually so far, not just from Kleiner Perkins, but total $400 million," Stahl remarked.

"You're in the ballpark," Sridhar acknowledged.

With that kind of money comes a lot of buzz. "In Silicon Valley, every time a company raises over $100 million, and they haven't come out with a product yet, everybody starts getting the heebie-jeebies," Michael Kanellos, editor-in-chief of the Web site GreenTech Media, told Stahl.

Kanellos admitted he is skeptical. "I'm hopeful but I'm skeptical. 'Cause people have tried fuel cells since the 1830s," he explained. "And they're great ideas, right? You just need producing energy at an instant. But they're not easy. They're like the divas of industrial equipment. You have to put platinum inside there. You've got zirconium. The little plates inside have to work not just for an hour or a day, but they have to work for 30 years, nonstop. And then the box has to be cheap to make."

One thing stoking his skepticism: Sridhar has been hyper-secretive - there's no sign on his building, a cryptic Web site, and no public progress reports.

Given the stealthiness, we were surprised when Sridhar showed us - for the very first time - how he makes the "secret sauce" of his fuel cell on the cheap.

He said he bakes sand and cuts it into little squares that are turned into a ceramic. Then he coats it with green and black "inks" that he developed.

Sridhar told Stahl there is a secret formula. "And you take that and you apply that. You paint that on either side of this white ceramic to get a green layer and a black layer. And…that's it."

One disk powers one light bulb; the taller the stack of disks, the more power it generates. In between each disk there's a metal plate, but instead of platinum, Sridhar uses a cheap metal alloy.

The stacks are the heart of the Bloom box: put 64 of them together and you get something big enough to power a Starbucks.

Sridhar offered to give Stahl a sneak peek inside the Bloom box.

"All those modules that we saw go into this big box. Fuel goes in, air goes in, out comes electricity," he explained.

"Now, won't the utility companies see this as a threat and try to crush Bloom?" Stahl asked.

"No, I think the utility companies will see this as a solution," Doerr said. "All they need to do is buy Bloom boxes, put them in the substation for the neighborhood and sell that electricity and operate."

"They buy nuclear power plants. They buy gas turbines from General Electric," he pointed out.

To make power, you'd still need fuel. Many past fuel cells failed because they needed expensive pure hydrogen. Not this box.

"You know, it's very difficult for us to come in here and make an evaluation. How are we supposed to know whether what you're saying is true?" Stahl asked.

"Why don't we talk to our first customers?" he replied.

Yes, he already has customers. Twenty large, well-known companies have quietly bought and are testing Bloom boxes in California.

One reason the companies have signed up is that in California 20 percent of the cost is subsidized by the state, and there's a 30 percent federal tax break because it's a "green" technology. In other words: the price is cut in half.

"We have FedEx, we have Walmart," Sridhar explained.

He told Stahl the first customer was Google.

Four units have been powering a Google datacenter for 18 months. They use natural gas, but half as much as would be required for a traditional power plant.

Sridhar told Stahl that three weeks in at Google, suddenly one of the boxes just stopped.

Asked if he panicked, he told Stahl, "For a short while… yes."

He fixed that; then there was another incident. "The air filters clog up and air is not coming into the system because the highway is kicking dirt. You just flip the system around, and the problem is gone," he explained.

Another company that has bought and is testing the Bloom box so Sridhar can work out the kinks is eBay. Its boxes are on the lawn in the middle of its campus in San Jose.

John Donahoe, eBay's CEO, says its five boxes were installed nine months ago and have already saved the company more than $100,000 in electricity costs.

"It's been very successful thus far. They've done what they said they would do," he told Stahl.

eBay's boxes run on bio-gas made from landfill waste, so they're carbon neutral. Donahoe took us up to the roof to show off the company's more than 3,000 solar panels. But they generate a lot less electricity than the boxes on the lawn.

"Yes. The footprint for Bloom is much more efficient," Donahoe said. "When you average it over seven days a week, 24 hours a day, the Bloom box puts out five times as much power that we can actually use."

But not everyone is convinced that even if the technology works, Bloom - that now makes one box a day - will ever be able to be as big as its backers say.

"What if he can get the price way down? He claims he can," she asked.

"And if he can, the problem is then G.E. and Siemens and other conglomerates probably can do the same thing. They have fuel cell patents; they have research teams that have looked at this," Kanellos replied.

"What do you think the chances are that in ten-plus years you and I will each have a Bloom box in our basements?" Stahl asked.

"Companies that you have bet on, they haven't all succeeded?" Stahl asked John Doerr of Kleiner Perkins.

"I have some famous failures," he acknowledged.

Doerr is praying that Bloom is not the next Segway, as he and Sridhar get ready for the company's official launch this Wednesday. They're pulling out all the stops, including high profile endorsements.

"I have seen the technology and it works," former Secretary of State Colin Powell said.

He joined Bloom's board of directors last year.

Asked if this is the answer to our energy problems, Powell told Stahl, "I think that's too big a claim to make. I think it is part of the transformation of the energy system. But I think the Bloom boxes will make a significant contribution."

To make a contribution, in Sridhar's mind, Bloom boxes will power not just our richest companies, but remote villages in Africa and all our houses.

"In five to ten years, we would like to be in every home," he told Stahl.

He said a unit should cost an average person less than $3,000.

"You are an idealist," Stahl remarked.

"You know, it's about seeing the world as what it can be and not what it is," Sridhar replied.

"I see you seeing a Bloom box in the basement of the White House," she said.

"Absolutely. I would love that to go on the lawn," he replied.

"So, forget…the basement. You want the Bloom box in the Rose Garden?" Stahl asked.

"Maybe next to that organic vegetable garden," Sridhar joked. "I would be happy with that."